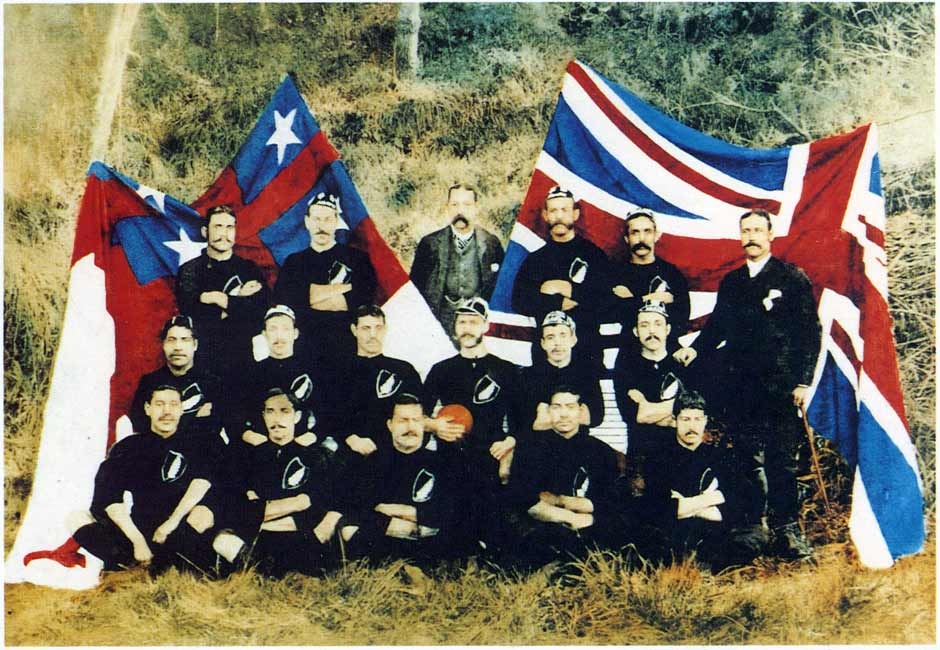 Let’s add one new word to a famous, historical quote, “The United Kingdom is the empire on which the rugby sun never set.” At one point in the 19th century, Great Britain, its possessions and colonies, controlled twenty-five percent of the Earth’s land mass.

And wherever the Union Jack flew, men and boys in these countries played rugby union. Most nations adopted the sport in its fundamental form while a few built upon the basic rugby rules to create their own contact sport, as the USA did with gridiron, Canadian twelve-man football, and Australian football or “Footy” on a round, cricket-shaped pitch. (Trivia flag question: A few nations once under British rule fly the Union Jack today in the canton of their national flag. Examples are Fiji, Cook Islands, Australia, Tuvalu, and New Zealand. Which state flag in the USA displays a canton with the Union Jack? Answer at the conclusion of this article,)

Rugby in the 1880s was demonstrably different from the sport engaged in today. The play of the game back then and the scoring emphasized kicking; with a dropped goal worth three points and kicking from a mark tallied three points. A try remained undervalued at just one point, and the conversion goal kick was worth two points. Over decades, the rugby rule makers in England (The RFU) realized that the battle for territorial possession represented the crux of the rugby contest and increased significantly points for a run in, touched down  try.

To clarify the rugby scoring nomenclature of this early period, the rules stated, “…a team that touches the ball down can then try to kick a goal.” (This is the origin of the term try.)  For many years, only goals counted in the final tally.

Rugby arrived in New Zealand in 1870 when local youth Charles Monroe arrived home after two-years of study in England. He introduced rugby to the town of Nelson on the South Island. The first match was between the Nelson Club and Nelson College with each side suiting up eighteen players. The college headmaster was a Rugby School alumnus who welcomed the familiar sport.

Rugby soon spread throughout the country, especially, among the native Maori inhabitants. Teams formed into competing provincial sides. One 20th Century rugby writer stated, “In colonial New Zealand, rugby football rather than cricket…encouraged loyalty to the Crown amongst white emigrants and helped assimilate a Māori elite into the ‘British way of life.'”

In 1888, an organization called the New Zealand Native Football Representatives agreed to send a Maori side to play the leading clubs in England, Wales, and Ireland. This visit represented the first overseas tour to these rugby playing nations.  Interestingly, no rugby was contested against Scottish clubs nor a test match scheduled against Scotland.

The side – called the Natives – traveled with twenty-six players, some of whom were not Maori, and a few were of half Maori ancestry. It sailed in August 1888 with a tour stop in Australia and remained abroad for nine-months. It won 78 games, lost 23, and drew on 6 occasions against clubs in England, Wales, and Ireland.

Injuries continually depleted the available players, often, only twenty men were fit to play. The Natives’ test match record resulted in a win against Ireland 13-4 and two losses, 7-0 to England and 5-0 to Wales. It returned home finally in May 1889, playing additional matches in New Zealand until August of that year. The total tour outcomes were 118 matches played, 81 victories, 30 losses, and 7 ties.

A poem of appreciative welcome appeared in the English magazine “Punch.”  It ended:

You‘re welcome, brother Maoris,
Here’s wishing you good luck.
With you there pace and power is
and skill and lots of pluck
A trifle “rough”? Why, just so?
but that you’ll mend no doubt
And win, all sportsmen trust so,
in many a friendly bout.

The Natives’ tour proved that the small nation could compete against the prominent rugby countries, including, neighboring Australia. The tour’s success lead directly to the formation of the New Zealand Rugby Football Union in 1892.  In the future, the NZRFU would select the  representative national side, comprised of white and Maori players. The next memorable tour would occur in 1905.

(Answer): The state of Hawaii flies the Union Jack in its flag’s canton, although the state was never a British possession.