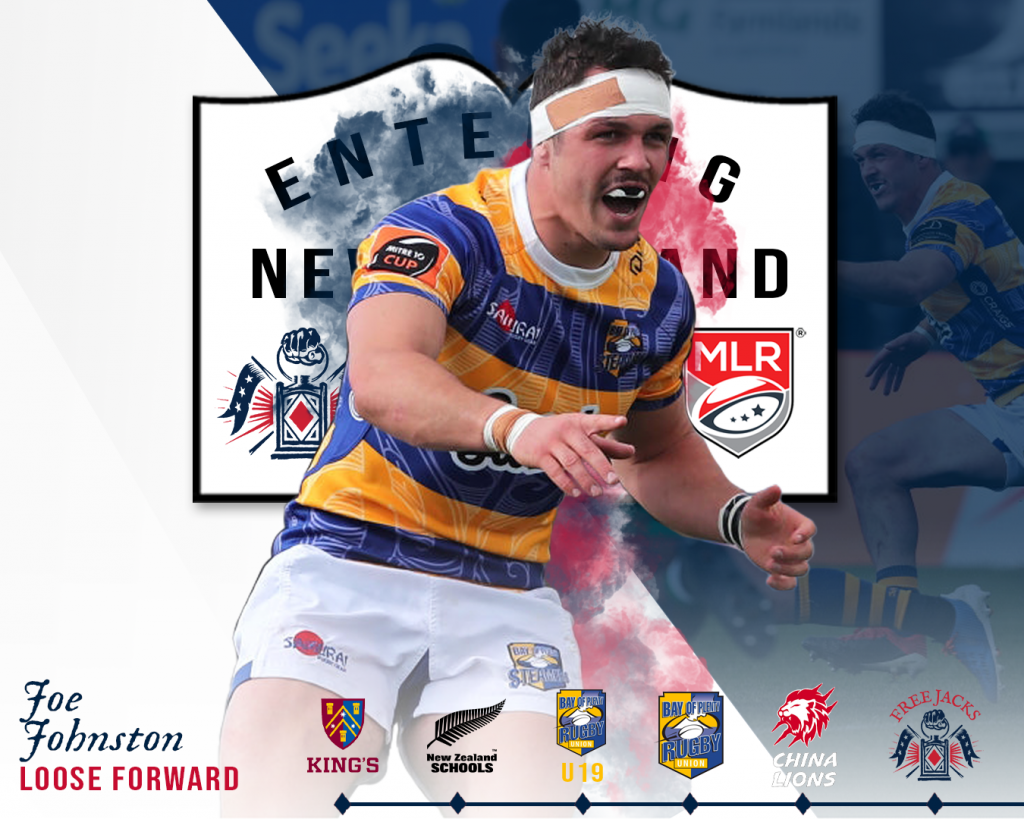 BOSTON – September 8, 2020 – New Zealand age grade standout Joe Johnston, has signed with the New England Free Jacks for the 2021 and 2022 seasons of Major League Rugby. The 22-year-old, 6’2, 225lb, back rower currently plays for Bay of Plenty in New Zealand’s Mitre 10 Cup. The signing will be a homecoming for the outstanding loose forward who is eligible to play for the United States, as Johnston’s mother was born and raised in Boston.

“I’m really excited to be heading over to the New England Free Jacks,” said Johnston. “Boston is where my Mum grew up and where my Dad, who’s a kiwi, spent some time playing for Beacon Hill Rugby Club. I’m looking forward to meeting distant family and friends from Boston and fully immersing myself in the culture of the team.”

Originally from Whakatane, Bay of Plenty, Johnston attended Kings College for his last two years of High School in 2015 and 2016. Johnston made an immediate impact at the historically strong school team, helping the Auckland Boys’ School to a top four national finish in 2015 and captaining the side in his final year.

Johnston’s performances caught national attention and in 2016 he earned selection for and captained the New Zealand Schools Barbarians side that competed for the Trans-Tasman shield, coached by incoming Free Jacks Head Coach, Ryan Martin. The Barbarians side went undefeated, knocking over both Australian and Fijian Schools in the process.

“Joe ‘The Mechanic’ Johnston is a very intelligent flanker with an endless motor,” said Free Jacks Head Coach, Ryan Martin. “Joe’s ability to turn the ball over at the breakdown through his physicality and game sense is second to none. A highly motivated professional with quality leadership skills, Joe will be great for us in New England.”

Johnston returned to Bay of Plenty (BOP) in 2017 as captain of BOP’s Under 19s squad. Off the back of stellar performances at age grade level for the squad, Johnston signed his first professional contract with Bay of Plenty for the 2019 and 2020 seasons. The young back row has only made a single appearance for ‘the Bay’ to date coming off the bench in the side’s 46-10 win over Manawatu, but can be expected to see more valuable game time in the season ahead.

Between Mitre 10 seasons, Johnston signed for the China Lions for the 2020 season, a side formed as a joint venture between Bay of Plenty and China Rugby Football Association that competes in Global Rapid Rugby. Though the season was cut short due to Covid-19, Johnston had a commanding performance starring in the back row in an entertaining 29-22 win over Fijian Latui at ANZ Stadium in Fiji.

Johnston is most comfortable at 7 given his breakdown expertise, but due to his size and skill set, equally comfortable across the back row when required. Expect meticulous performances from the Bay of Plenty product this coming season.

Join Joe and the Free Jacks for a virtual meet and greet, “News and Brews,” this Thursday, September 10th. Grab a Free Jacks IPA and join the virtual gathering and get to know the newest Free Jacks and the returning players. RSVP using the link here: https://freejacks.com/news-and-brews/.