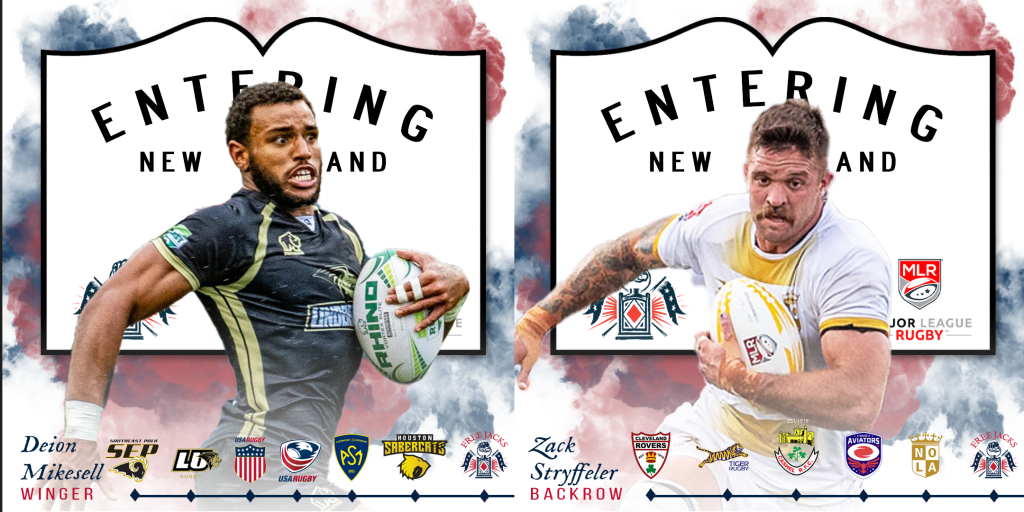 Winger, Deion Mikesell, and Loose Forward, Zack Stryffeler, will Join the Squad This Week to Complement the Team

Deion Mikesell is one of USA’s most promising and explosive outside backs. Deion excelled on the field at Lindenwood University in both 7s and 15s. He helped drive the team to both National 7s and Collegiate Rugby Championship titles in 2018 and earned multiple All-American caps throughout his collegiate career. Deion proved to be a standout player in the 2018 All-American historic win over MLR’s Glendale [Colorado] Raptors. Deion is USA Eagle #490, having made his debut for the US national team in 2016 against Uruguay. He amassed his second cap against Brazil the following year.

Zack Stryffeler joins the Free Jacks as one of the most experienced and proven back row forwards of the MLR to date. In the 2019 season Zack recorded a jaw dropping 232 tackles across all 16 games for the NOLA Gold, ranking 4th across the league. Zack found rugby in New South Wales, Australia, in 2010. Since then he has accumulated a rugby resume that includes positions with the Cleveland Rovers, Ohio Aviators, Tiger rugby, Atlantis, Cashel Rugby Club in the All Irish League and NOLA Gold.

“We are ecstatic to have Zack and Deion join what is already shaping up to be a well-rounded roster. Both men embody the values of what we believe a Free Jack stands for and we are looking forward to welcoming the pair to the team in the next few days,” commented head coach Josh Smith. “Zack brings a wise head and gold standard work rate to our back row, while Deion adds unrivaled firepower with ball in hand and a robust defensive game to the back three. Importantly, they are both visually excited to begin making the connections with the team and contribute to the growth of the Free Jacks as we head into the season.”

The pair will join the Free Jacks later this week when the team return from the first week of pre-season training in the woods of New Hampshire. We are looking forward to welcoming both Deion and Zack to New England.

Be sure to secure your Founding Member season tickets to catch the Free Jacks in their inaugural 2020 season in Major League Rugby while seats are still available. Details of season ticket packages can be found at freejacks.com.