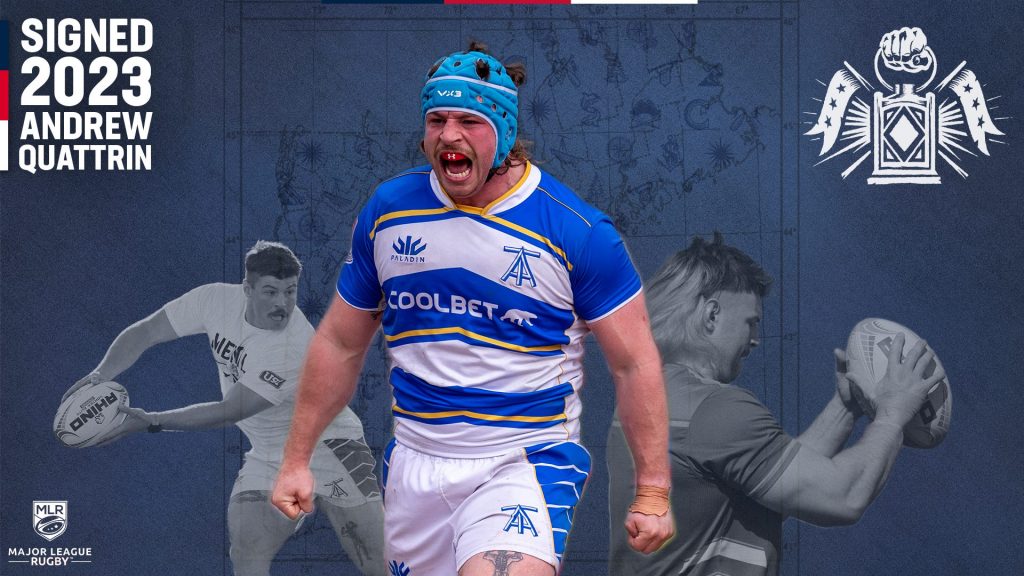 Quincy, MA – September 14, 2022 – The Free Jacks are excited to announce the addition of Andrew Quattrin to the playing roster ahead of the 2023 Major League Rugby Season. Veteran MLR hooker and Canadian international hooker adds explosive force up front, outstanding open field versatility, and set piece precision to the Free Jacks forward pack. Quattrin is recognized as an outstanding individual amongst his community and peers, having been the recipient of the 2022 MLR S. Marcus Calloway Community Impact Award for his exemplary passion, excellence and integrity on and off the field.

“I’m very excited to be involved with such an amazing organization,” noted Andrew. “I’ve heard nothing but great things top to bottom about this team and I can’t wait to get down to meet the boys, get involved in the community, and put the hard hats on. Let’s ride.”

Quattrin has recorded 48 MLR matches to date with the Toronto Arrows, including 41 starts across 4 seasons. The seasoned 26 year old has represented the Canadian international team on 14 occasions, including his debut match in 2019 vs the United States and two caps at the 2019 Rugby World Cup.

“Andrew has proven himself as one of the form hookers in MLR over the past four seasons with the Toronto Arrows,” commented Free Jacks General Manager, Tom Kindley. “We see him as a person who will make us better both on and off-field, and adds a point of difference in his size and physicality. We are thrilled Andrew earmarked New England as a team he wants to play for and we can’t wait to see him pull on the jersey.”

Hailing from Holland Landing, Ontario, Canada, the 6’, 253lbs front row forward graduated from Laurier University where he captained the university squad for 3 consecutive years.  Quattrin formerly represented the Ontario Blues, Aurora Barbarians, and the Canadian U20 team. Beyond rugby, Quattrin has a love of cycling and bike fixing as well as classic rock, house, and country music.

Quattrin received the 2022 Major League Rugby S. Marcus Calloway Community Impact Award for his recognition as a leader, his commitment to community and his impact inspiring others. Quattrin dedicated more than 100 hours into community initiatives across Toronto and the Greater Toronto Area throughout 2022, and inspired teammates to invest several hundred more. The Toronto Arrow’s designated Community Leader, he ensured all Arrows-supported community events were well organized and well attended by the players while balancing a rigorous training and travel schedule. The Free Jacks are humbled and excited to welcome the outstanding player and individual to New England.