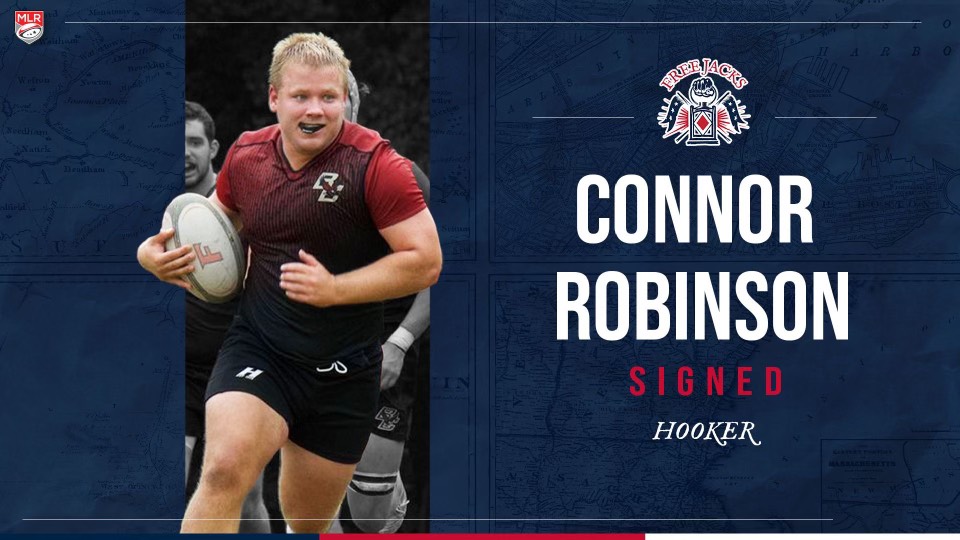 Boston, MA — December 9, 2021 — The Free Jacks are proud to announce the signing of Boston College hooker Connor Robinson to a 1-year developmental contract. At 5’10”, 235lbs, the local front rower brings plenty of potential to his first year in the MLR.

“I am extremely excited to join the Free Jacks,” Robinson commented when asked about the next chapter in his rugby career. “Growing up in the Greater Boston area, I remember attending many of their early exhibition games so now being part of the team is really a dream come true.”

Connor attended St. John’s Prep from 2014 to 2017 where he typically found himself wearing the 8 jersey. In 2015 Robinson began playing with Mystic River Rugby, aiming to sharpen his game outside of the high school competition, and has been with the team ever since.

Upon graduating high school, Connor was advised by coaches to make a move to the front row, specifically hooker due to his attention to detail and proficiency in the lineout.

In 2017, Connor moved to Boston College, making his start at prop before moving to hooker. Training under the mentorship of past Free Jack hookers such as Steven Hinshaw, and previous Free Jacks Forwards Coach Kareem Afifi, Robinson was able to quickly excel in the #2 jersey.

Although shifting forward to the front row, Robinson proved himself to be a try scoring machine. In only 8 conference games, Robinson scored an astonishing 19 tries, leading the way in the Liberty Conference by a comfortable margin.

“Connor has always been highly rated in these parts and it works out really well with him finishing his studies to come in as a development player and immerse himself into our environment as much as he is able to,” commented Free Jacks Performance Director, Tom Kindley. “He is a solid core role operator, very diligent and has a nuggety hooker build. We think he’s a guy who might surprise us.”

With experience across the forward pack, the 22 year old has plenty of potential to excel with the Free Jacks. Look to see Robinson and the rest of the New England squad put on an impressive performance at Veterans Memorial.