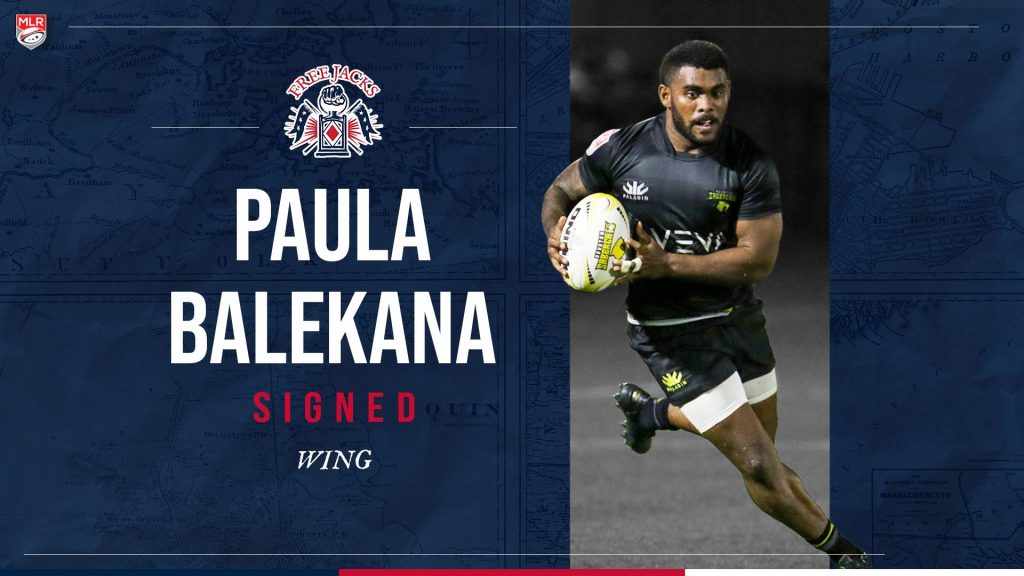 Boston, MA — December 31, 2021 — The Free Jacks are excited to announce the signing of former Sabercat wing, Paula Balekana, on a one year contract. At 5’10”, 225lbs, Balekana is a sizable back who has already proven himself to be one of the most impactful players in the MLR.

“So excited and humbled to be part of the New England Free Jacks. Looking forward to a great season ahead,” exclaimed Balekana on the next chapter in his rugby career.

Growing up in Wainibuku, Fiji, Paula had been playing rugby since his youth. Balekana was offered a scholarship to play for Kelston Boys High School in New Zealand, where he also played for the likes of Waitemata Rugby Football Club and Auckland Sevens.

In 2016, Palekana moved to Australia where he played for Gordon in the Shute Shield, becoming the team’s leading try scorer, something he has become accustomed to over the years. He then played for the Sydney Rays the following year in the National Rugby Championship.

Balekana’s talents brought him to Parma, Italy in 2018 to play with Zebre Rugby in Pro 14 as well as the European Challenge Cup.

Paula finally made an electric MLR debut for the Houston backline in 2021. In only his first year in the league, Balekana proved to be one of the most lethal attacking backs in the league.

The Fijian wing finished the season the team-leading try scorer, crossing the line on 6 occasions. Along the way, Balekana picked up 1,421 carry meters, ranking second in the MLR through 147 carries. A serious threat with the ball, Paula ranked 1st in the league in both line and tackle breaks picking up 21 and 64 respectively.

“When inquiring about Paula’s time in the Pro 14 last year, we were advised that we would be silly not to give Paula an opportunity with the Free Jacks,” commented Free Jacks Performance Director, Tom Kindley. “After watching him stand out on a struggling team last season we were not prepared to make the same mistake twice and are delighted he will be translocating to New England.”

“He’s highly regarded as a teammate and is underrated for his defensive ability and rugby IQ, on top of his ability to shed defenders at will. We hope to see a smile on his face and many trade mark swan dives this year.”

Through a year in the league, Balekana’s work on the wing has been nothing but destructive for opposing defenses. This is a valuable addition to the already intimidating backline that calls Veterans Memorial Stadium home. Look to see the Fijian phenom take the pitch in Quincy this 2022 season.