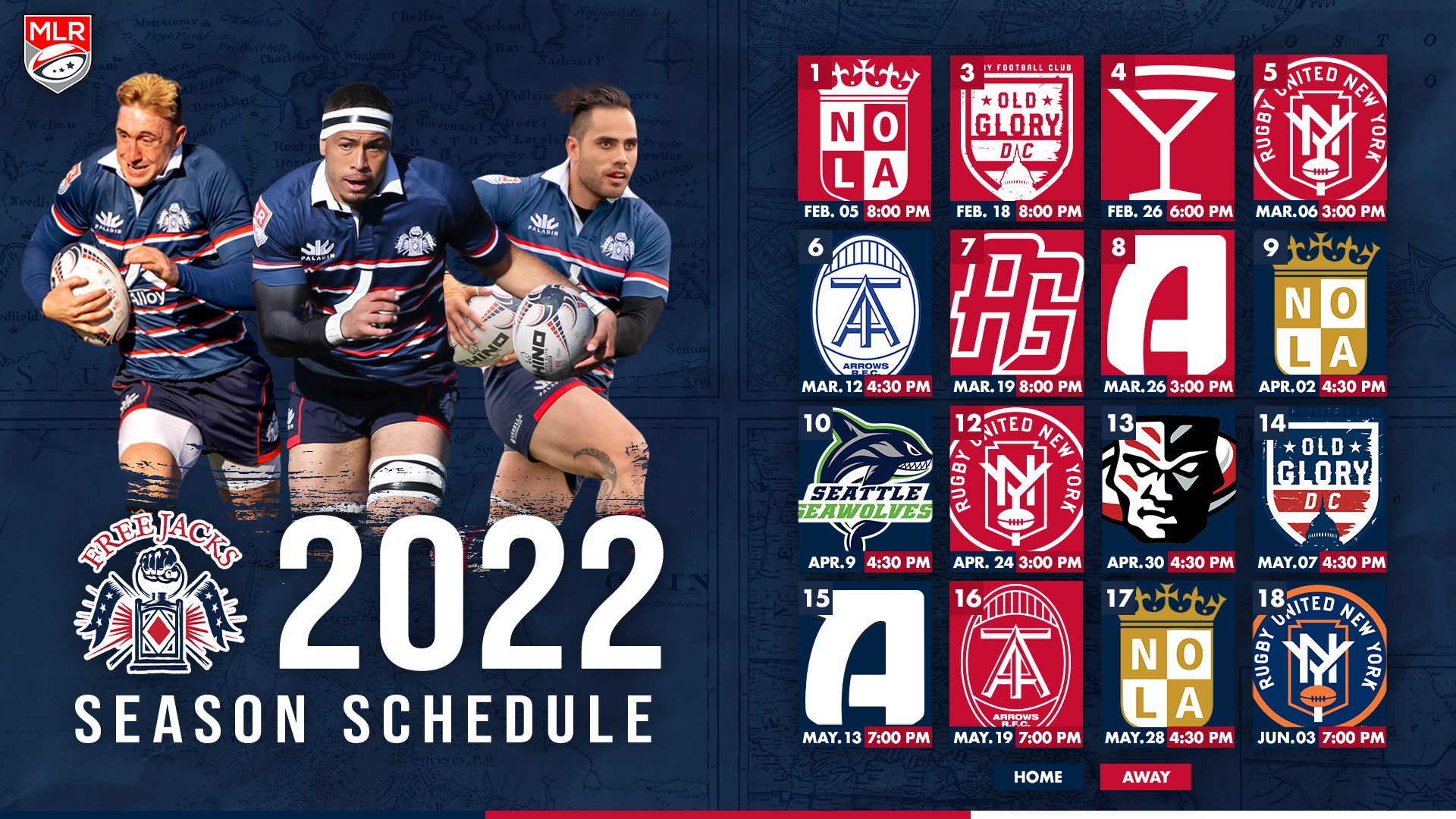 “We are excited for Major League Rugby’s fifth season and the continued growth of the League,” said Commissioner George Killebrew. “We’re confident that this season is going to be even better than the last, and that the fan experience is going to continue to improve. February 5 is going to be a great day for rugby enthusiasts and sports lovers in North America.”

The Free Jacks are preparing to host their first full season at the team’s new home stadium, Veterans Memorial Stadium, in Quincy, MA. The world-class 5000 seat venue, luxury-styled seating, a state-of-the-art Daktronics video board, upgraded control center and press box facilities, plus locker and training rooms adds fuel to the Free Jacks’ fast growth. The Free Jacks Festivals create an unparalleled fan experience around the game of rugby, with easier access to parking, great seat choices, increased space for all festivities including beer garden, games, food trucks, and live music. With a home in the City of Presidents, the Free Jacks hope to make the 2022 Major League Rugby Season the most accessible and exciting rugby year to date.

Changes have been made to the MLR Championship Series, beginning with the regular season set to conclude on Sunday, June 5, 2022. While the No. 1 seeds in both the East and West will receive first-round byes, the No. 2 and No. 3 teams in each conference will compete on June 11 and 12. Thereafter, the No. 1 seeds in both conferences will face the winners of the No.2 vs.

No. 3 matchups on June 18 and 19 for the MLR Conference Finals. Ultimately, the MLR Championship Final will take place the weekend of June 25/26.

Opening weekend will take the Free Jacks to New Orleans to face NOLA Gold in the first of three contests against the purple, green and gold on Saturday, February 5th. Other highlights of the Free Jacks schedule includes a home opener kicking off Saint Patrick’s Day Weekend festivities in Boston as the Free Jacks host Toronto on Saturday, March 12th at 4:30 pm, the introduction of the Coffee Cup; a cross-country rivalry with the Seattle Seawolves taking place on April 9th, and the ever-present rivalry between Boston and New York will be brought to new heights with the inaugural Chowder Cup and will see the teams going head to head three times this season with the final matchup closing out the regular season campaign at home on Friday, June 3rd at 7 pm.

Broadcast information will be announced at a later date.

There will be a variety of pre-season activities in each market as well as a national media day where each team will provide standout players for national and international media availability.

About Major League Rugby: Major League Rugby is a professional sports league entering its fifth season that represents the highest level of rugby competition in North America. The League evolved from seven teams in 2018, to 13 teams in 2021, featuring 12 from the United States and one from Canada. Matches are televised on CBS Sports Network, Fox Sports 1 and Fox Sports 2, among other national and local market platforms. Select matches are available to stream live in North America on The Rugby Network, and all matches are available on The Rugby Network for international fans.

MLR prides itself in fostering intense and high-stakes competition while bringing together a passionate community built on the values of Respect, Inclusivity, and Tradition. For more information about MLR, visit www.MajorLeague.Rugby.