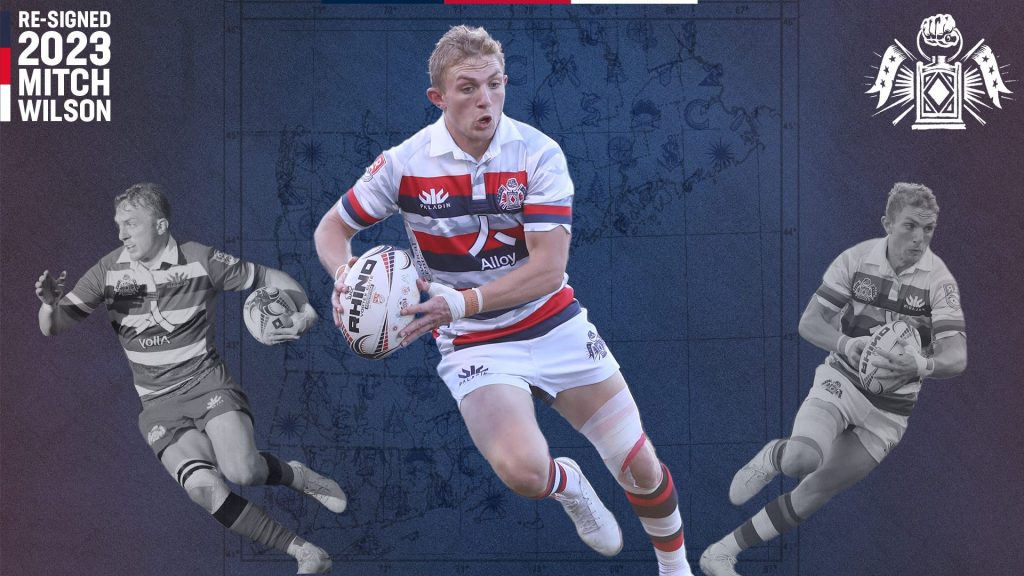 Quincy, MA — September 16, 2022 — The New England Free Jacks are excited to welcome back utility back Mitch Wilson for the 2023 and 2024 Major League Rugby seasons. A sensation on the field throughout the 2022 MLR campaign, Wilson earned recognition with his first cap for the USA Eagles during the 2022 season vs the French Barbarians.

“This past season with the Free Jacks followed by my time with the USA Eagles has been the highlight of my rugby career,” noted Wilson. “I can’t wait to return for 2023 and am excited for what we’re going to accomplish and where we will go from here. Let’s ride!”

Wilson had a breakout season in 2022, appearing 15 times for New England and totaling 49 points. Explosive on attack, fearless under the highball, and resolute on defense, Wilson was a staple of the New England back line and provided excellent leadership on and off the field. Versatile in his ability to play across positions, Wilson found playing both sides of the wing throughout the season as well as occasionally dropping back to fullback.

“We are delighted to have Mitch commit his next two years to the franchise. He has shown his quality last season which deservedly earned him a US call up,” noted Free Jacks General Manager Tom Kindley. “He has a high-level skillset for a wing but brings with that an unrivaled competitive spirit. He has been an influential leader for this team and embodies all that we have come to expect from a Free Jack.”

Moving to the United States in the beginning of his high school years, Wilson could be considered a local as much as he is an international player. While studying at Life University in Marietta, Georgia, Wilson led the Running Eagles to one of their most successful periods in the history of the program, winning the D1A National Championships in 2016, 2018, and 2019. He served as captain from 2017-2019. In 2018, Wilson captained the Collegiate All-American team, defeating the Glendale Raptors, and represented the USA Selects in Montevideo in the Americas Pacific Challenge.

Look for Mitch to bring leadership and high energy to the Free Jacks campaign in 2023.