Rugby in America – Harvard and Yale 1875 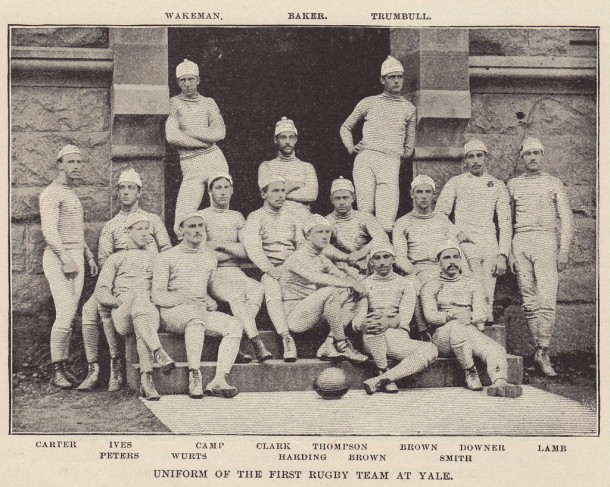 With the close of  the year 1874, Harvard could consider the past football-playing season a success as McGill University in Canada had introduced the new sport of rugby union to the college. Rugby arrived with its own set of codified rules formulated in 1871 (by three lawyers) in London and agreed to by over twenty English clubs. The set of written rules would mark a useful departure from each British or American school playing its own version of football.

The problem for Harvard at the beginning of 1875 was to find competition to play the rugby game since all the other possible opponents (Yale, Columbia, Rutgers, and Princeton) played soccer football. In June of 1875, Harvard convinced nearby Tufts University, Medford, Massachusetts, to play rugby; the contest won by Tufts. Many historians view this game as America’s initial “uniform-wearing” athletic match.

Harvard had its football sights on Yale, its historic rival. Harvard, the nation’s oldest college (1636) and Yale, the fourth oldest (1701), competed in the first American college sporting event, a crew race dated 1852. The winner’s regatta prize comprised a set of  decorated oars, and represents the oldest intercollegiate athletic trophy in America. (NB: The oldest Oxford vs. Cambridge sporting event was a cricket match in 1827.)

In 1875, Nathaniel Curtis, a Harvard player (and later, the football captain) contacted the Yale captain to play rugby, which the Elis had never played before, Yale counter offered with a compromise, the match to consist of some soccer football rules and some rugby rules. Harvard agreed in what would be titled “The Concessionary Game.” The match to be played with fifteen men although Yale would have preferred eleven players, a familiar number it had experienced in a soccer football match earlier that year with visiting English public school students from Eton.

The Harvard-Yale match was scheduled for November 13, 1875, and played at Hamilton Park, New Haven. Of note, Yale promised Harvard seventy-five dollars for train travel. That sum turned out to be a  profitable boon to Yale as it charged fifty-cents a ticket, purchased by an astonishing two-thousand spectators, or gate receipts approximating $1,000.

The rugby rules of the day awarded a point for each try and the conversion. Harvard was victorious 4-0. The colleges wore distinctive uniforms, Yale in dark pants, blue jerseys, and yellow caps while Harvard arrived in crimson-colored breeches.

Two Princeton undergraduates were among the day’s spectators. When they returned to the New Jersey campus, they eagerly described the Harvard-Yale match, and urged fellow athletes to switch from soccer football to the nascent rugby game.

In 1876, Harvard, Princeton, and Columbia reformed the Intercollegiate Football Association, this time utilizing rules from the Rugby Football Union in England. Yale declined to join but agreed to assist in deciding new rules of the game.

One by one, other New England colleges picked up rugby, including, Brown, Dartmouth, and Bowdoin. In addition, the region’s many prep schools started to play rugby union as well.

With a reformed football union, a universal set of written rules, and increasing popularity among colleges and high schools, it seemed that rugby would flower and realize itself to become the permanent national football game,  But in that Harvard-Yale match of 1875, a Yale freshman named Walter Camp would participate in the first of his six rugby-playing college seasons.  And Camp, serving as Yale’s representative year after year on the Rules Committee, would insist on significant  transformations for the sport of rugby.