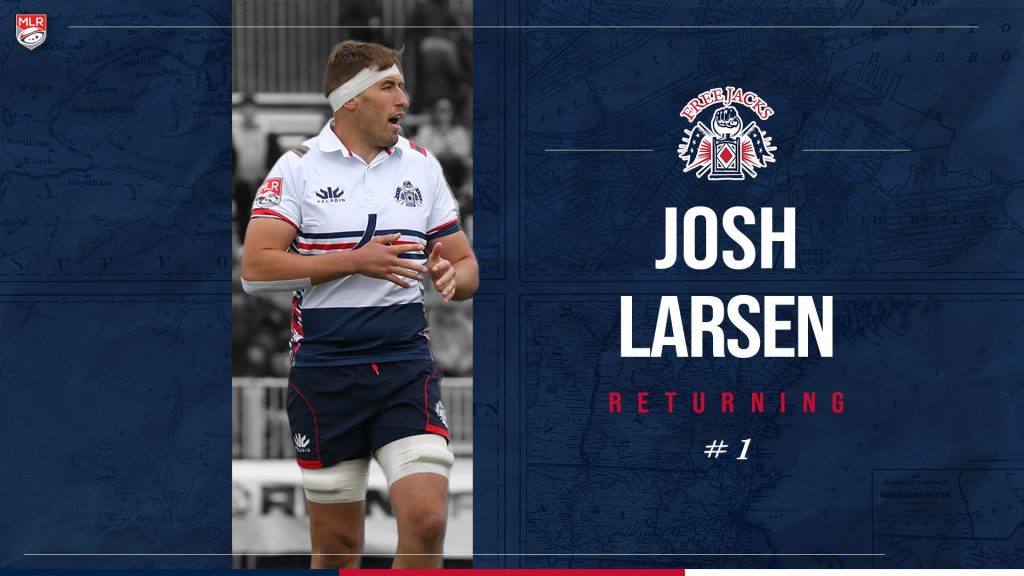 Boston, MA — October 15, 2021 — The Free Jacks are thrilled to announce the return of team captain Josh Larsen to New England in 2022, the second to last year of an initial contract term. A core cog in the Free Jacks machine, the 6’5 lock was a crucial component in the team’s success last year and looks to make the same impact moving forward.

One of the top locks in the MLR, Larsen’s performances over the season produced impressive numbers within the league. A defensive powerhouse, Josh successfully completed 139 tackles in his 12 games last season, ranking 21st in tackles made across the league. Of those hits, 7 were dominant, ranking him 13th in the league often seen driving ball carriers backwards.

Not only was Larsen a dominant defensive force, but also technically sound at set piece time for New England. With a total of 69 lineout takes, Josh ranked 5th in the MLR. A captain who led by example, Larsen’s effort on the pitch was a key, especially within the forward pack.

“We are delighted to have Josh back in Boston for what will be his third year with the New England Free Jacks and fourth season of Major League Rugby,” exclaimed Free Jacks Performance Director, Tom Kindley. “Lars has developed into a great leader during his time in Boston, well respected for the way he leads relentlessly on the field and the kind of guy you can build a team around off the field.”

“A great lineout operator and accurate forward in open play, his game really kicked on this past year to a point where he played his way back into the starting Canadian line-up during the UK tour and was nominated Player of the Year by the coaching staff.

Born in British Columbia, Larsen grew up in New Zealand, where he started playing rugby at six years old. In 2017, Larsen earned a spot on the Canadian Senior Men’s Team against the Maori All Blacks in Vancouver. From there on, he accumulated 15 caps and in 2019 was selected for the Rugby World Cup in Japan. He then moved on to play for the BC Bears in the 2018 Canada Rugby Championship.

Having been such a driving force in the competitive nature of the Free Jacks, Larsen’s return gives New England’s forward pack a serious edge moving into the 2022 season. Stay tuned for powerful performances from the Canadian lock next year.
About The Free Jacks:  The Free Jacks are an aspiring and innovative live events, media, and consumer products organization. The core brand in the portfolio is The New England Free Jacks, the humble hard-working free-spirited professional rugby team competing in the emergent and exhilarating Major League Rugby (MLR), the premier North American professional rugby competition. For more information please visit www.FreeJacks.com