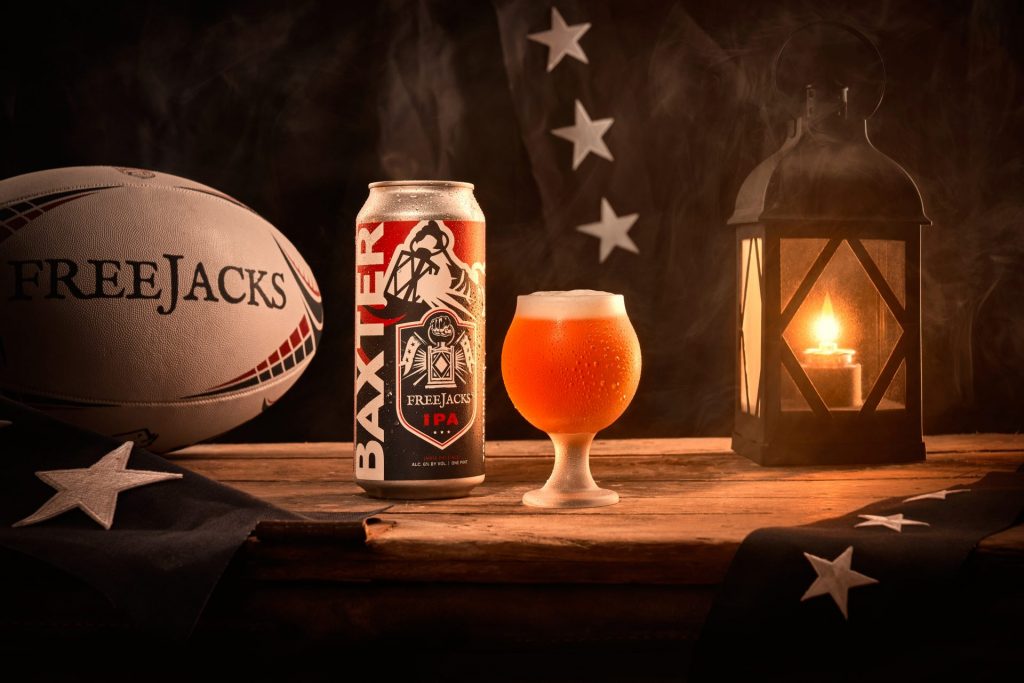 QUINCY, MA – Ahead of the 2022 Major League Rugby campaign, the New England Free Jacks are delighted to extend our long-standing partnership with Baxter Brewing Co. The Free Jacks IPA by Baxter, the Official IPA of the Free Jacks, will ignite the fire to live life to the fullest for all fans. In addition to the Free Jacks IPA, supporters will be able to enjoy a wide range of great beers by Baxter at Free Jacks match festivals and fan fest at Veterans Memorial Stadium.

“We are thrilled to kick off the 3rd year as the Free Jacks exclusive IPA partner,” commented Jenn Lever, President of Baxter Brewing Co. “The growth of the Free Jacks fan base has been an exciting experience to be a part of, we cannot wait to see what this new season and new stadium will offer for the fans and beer lovers alike. Be on the lookout for Free Jacks IPA in stores, bar and restaurants near you!”

The Free Jack IPA is a delicious blend of East and West-Coast IPA styles and features the newly popular and sought-after Strata hops. It’s packed with tons of tropical fruit flavor and rich aromatics held together in a beautiful, clean presentation. It’s a proud addition to the Baxter Brewing lineup and is sure to be a hit on match day at the Free Jacks stadium.

“The Free Jacks IPA and Baxter have embodied the spirit of commitment to craft, innovation, and quality, and have created a beautiful IPA that we can all celebrate as we come together,” stated Free jacks Co-Owner and CEO, Alex Magleby. “The partnership with Baxter has gone from strength to strength and we are excited to build more opportunities to present a wider range of Baxter Beers at the Free Jacks match festivals.”

The Free Jacks begin their 2022 Major League Rugby campaign on February 5th in New Orleans. The New England-based professional rugby team will play its home opener at their new home venue, Veterans Memorial Stadium in Quincy, Massachusetts, on March 12th against the Toronto Arrows in a Saint Patrick’s Day Festival. The Free Jacks will host 8 home matches through the 2022 season and fans can meet up at the Baxter Brewing pub at the stadium.

About Baxter Brewing Company: Baxter Brewing Company is the first brewery in New England to offer its entire lineup exclusively in cans. Baxter brews beer for a sense of adventure, with grit and integrity. Enjoy these all-season, any-weather beers at The Pub (next door to the Baxter Brewery in the historic Lewiston Bates Mill) or on the trail (during an outdoor event produced by Baxter Outdoors). The Baxter family of beers, spearheaded by flagship brew, Stowaway IPA, has propelled Baxter Brewing to its current standing as an award-winning brewery and central Maine business staple.