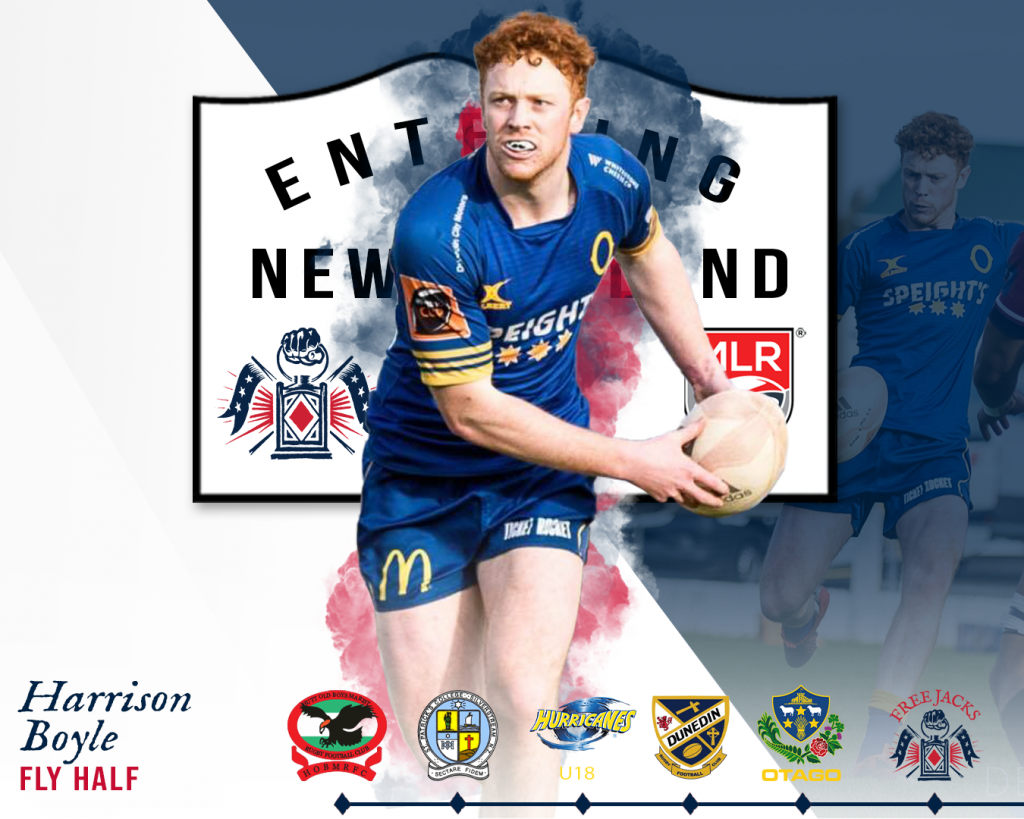 BOSTON – November 25, 2020 – The Free Jacks are excited to welcome Harrison Boyle to the squad for the 2021 season of Major League Rugby. The 20 year-old, 6’4, 210lb flyhalf, was born in Boston before returning to New Zealand where he was raised.

“The opportunity to play for the Free Jacks is one that excites me for many reasons,” said Harrison. “To return to the place I was born and play the game I love whilst continuing my development is one that I could not pass up. I can’t wait to meet the squad and get to work.”

Born in Boston, Harrison and his family returned to Wellington shortly thereafter where he grew up in Lower Hutt and began his rugby career playing for Hutt Old Boys Marist Rugby Club. Harrison attended St Patrick’s College, Siverstream from 2013-2017 where he would play for two years in the 1st XV and co-captain the 2017 team which won the Wellington schools championship and finished in the top 8 in New Zealand. Harrison went on to represent Wellington through the age grade system and was selected for Hurricanes Under 17s and 18s camps during his time in Wellington.

In 2018, Harrison moved down to Dunedin where he is three-quarters of the way through a law degree at the University of Otago and plays his club rugby for the Dunedin Sharks. Harrison, originally a member of the Otago Rugby Academy, played for the Otago Under 19s in 2018 and 2019, going on to make his professional debut for Otago in a Ranfurly Shield defense against North Otago in 2019 and Mitre 10 Cup debut against Northland this year.

“Harry ‘the red ghost’ Boyle is an up and coming talent coming out of the New Zealand rugby system,” commented Free Jacks Head Coach, Ryan Martin. “Harry at the ripe age of 20 has played Mitre 10 Cup, and was also selected to attend the New Zealand Under 20 Camp. He is a dynamic First Five who doesn’t mind the physical work and has a fantastic running game. Off field he is a talented and resilient fella and he will undoubtedly add a lot to our program.”

Harrison was selected as part of NZ U20’s 50 man wider squad camp in February 2020 which was set to have a team selected to compete at the Junior World Championship in Italy before COVID-19 curtailed the event. Most comfortable at Flyhalf, Harrison has spent time at Fullback and even on the wing during the Mitre 10 Cup Season. At 6’4, Harrison is very rangy and equipped with a quality skill set which should see him excel for the Free Jacks managing the game at either Fly Half or Fullback in 2021.