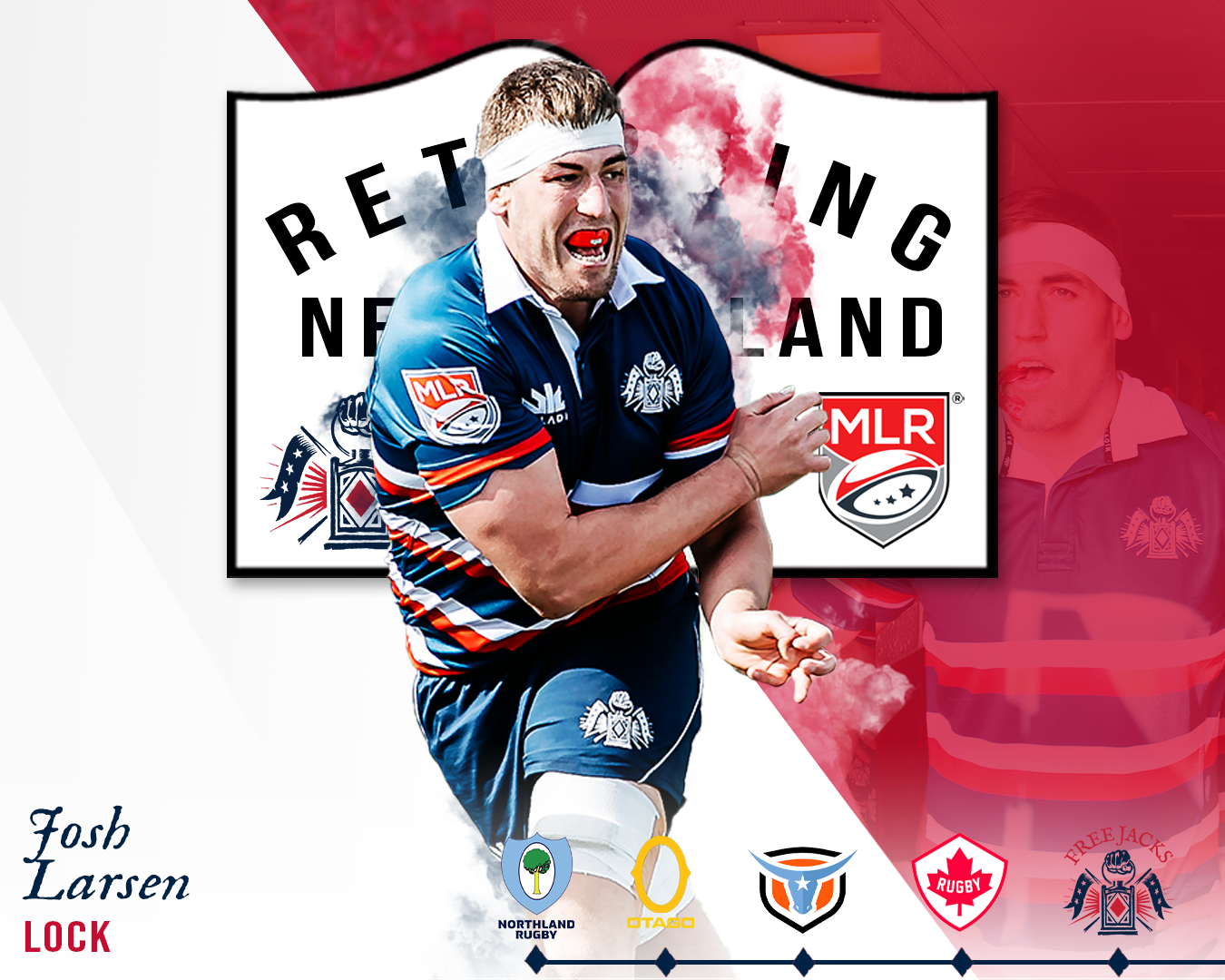 BOSTON – October 22, 2020 – The New England Free Jacks are excited to announce the return of Josh Larsen. The inaugural season team captain formed a core component of the Free Jacks engine-room in 2020 and will add further continuity to the 2021 side. Standing at 6’ 5” and weighing 235 pounds, the Canadian lock is a proven force at International and Major League Rugby levels.

“I’m buzzing to be back in Boston,” commented Larsen. “I’m really excited by the direction the re-jigged coaching staff is looking to take the side. Fans and the community will finally see professional rugby live in New England and I cannot wait for that. We have unfinished business to attend to.”

Born in British Columbia, Larsen grew up in New Zealand, where he started playing rugby at six years old. Josh’s talent was noted across the Pacific, and he got the call to represent the Maple Leafs under 20 side in the Junior World Trophy as his first taste of international rugby.

Mitre 10’s, Northland called Josh up from the team’s academy side, where he played for the Taniwha in the 2016 Mitre 10 Cup season. Josh missed the 2017 season through injury, recuperating in time to play for the Otago Razorbacks in 2018. While juggling a professional rugby career in the Mitre 10 Cup, Larsen attended the University of Otago where he graduated with a Bachelor’s Degree in Commerce.

In 2017, Larsen made his first appearance for the Canadian Senior Men’s Team against the Maori All Blacks in Vancouver. Since then, he has accumulated 15 caps and recently was selected for the 2019 Rugby World Cup in Japan.

Larsen began his club career in North America in 2018 when he played for the BC Bears in the Canada Rugby Championship. The following year, he signed with the (then) Austin Elite, where he served as vice-captain before finding a new home in New England.

Josh’s first season for the Free Jacks proved a good one, leading the team as captain for the 2020 season. Appearing in all but 8 minutes in the five games of the abbreviated 2020 season, Larsen showed his worth with a team-topping 59 tackles and 19 lineout takes. The skipper even showed a knack for getting to the try-line with two conniving try’s, one seeing Larsen dive over the breakdown.

“Josh showed real ticker in the Free Jacks jersey this season and is a key part of what we are building here in New England,” commented Free Jacks Performance Manager, Tom Kindley. “Josh executes his core roles meticulously well, whether that’s getting us over the gainline or calling the lineout. He got through a mountain of work defensively, leading from the front and has a handy skill-set for a big man, able to throw a wide ball when the occasion arises. We are excited to get Lars back in the fold and to build on 2020.”

Join Josh and the Free Jacks for a virtual Town Hall “News and Brews,” on November 12. Grab a Free Jacks IPA, join the virtual gathering and get to know the newest Free Jacks and the returning players. RSVP using the link here: https://freejacks.com/news-and-brews/.