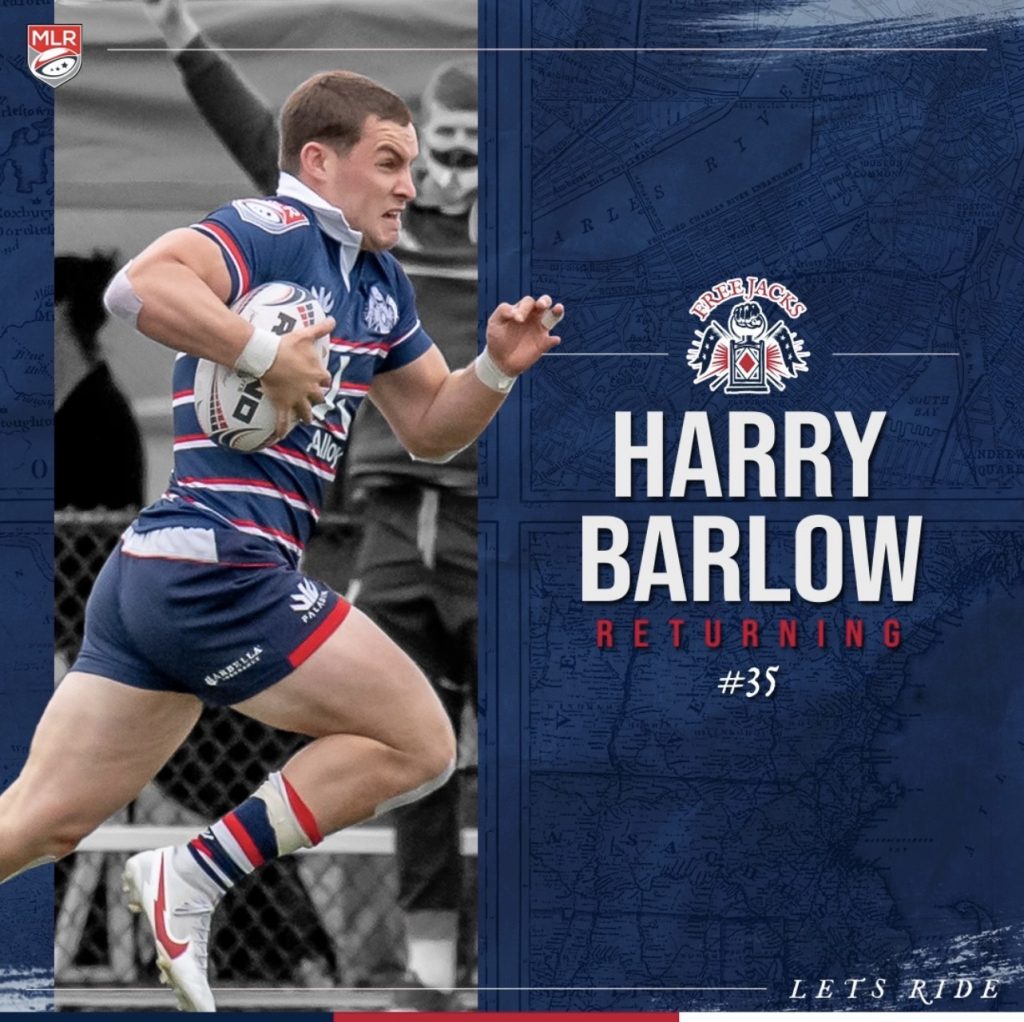 After an exceptional 2021, “The Wheelbarrow” returns looking for a repeat performance in the upcoming MLR season

Boston, MA — October 19, 2021 — The Free Jacks are thrilled to welcome back highly physical offensive asset Harry Barlow to the New England Back line. Coming into the 2nd year of his 2 year contract with New England, the 5’10 200lb Englishman sets his sights on a big season ahead.

With the ball in hand Barlow got to work in 2021. Only one behind the Free Jacks’ leading try scorer, Dougie Fife, Barlow finished the season with a total of 8 tries, ranking him tied for 12th in the MLR. This would accumulate a total of 40 points for the high flying back, sitting him at 27th in the league in said category. Along the way Barlow used his swift footwork to pick up 807 meters, 35 tackle breaks, and an impressive 11 linebreaks, the 11th most in Major League Rugby.

“Harry ‘The Wheelbarrow’ Barlow had a reinvigorating year having departed the Harlequins academy for the shores of MLR,” expressed Free Jacks Performance Director, Tom Kindley. “Harry is a very amiable figure within the team and you could see the enjoyment he had playing the game this year. Harry quickly showed his prowess with the ball in hand with the offensive numbers he was able to produce.”

“Beyond his ability to break tackles and score tries the rest of his game has been developing, quickly putting him on the radar for the US national team. We are looking forward to seeing what’s in store for Harry’s second year in Boston, more tries and smiles I’m sure!”

Born and raised just outside of London in a town known as Guildford, Barlow earned the opportunity to represent England during his early rugby career as part of the U16, U17, U18, and U19 teams. He had been a key member of the English Premiership’s Harlequins’ Academy since the age of 13. At 18, Barlow earned his first contract for the Harlequins senior squad. He was also a part of the 2019 Quins 7s team that won the London Floodlit 7s and featured for the Harlequins at the Premiership 7s in 2018 and 2019.

Much of the success of New England’s hard hitting backline can be attributed to the speed and finishing abilities of Harry Barlow. With the ball in his hand Barlow’s nifty skillset pushed the Free Jacks farther and farther into opposing territories game after game. Look forward to seeing this undeniable talent take the pitch in the upcoming 2022 MLR season.