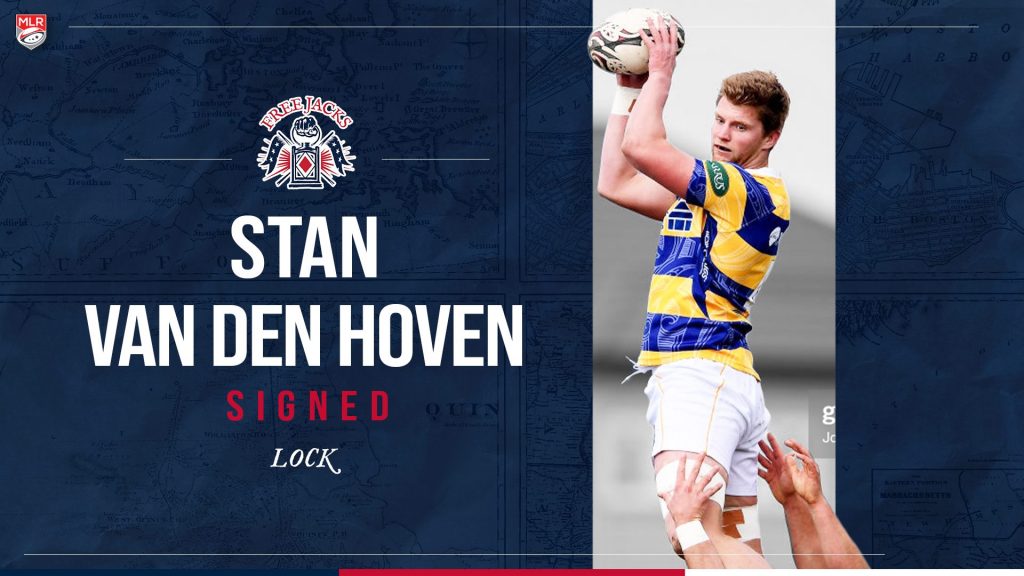 Boston, MA — November 19, 2021 — The Free Jacks welcome standout Bay of Plenty player Stan van den Hoven to the New England roster ahead of the 2022 season. At 23 years of age, the 6’8”, 250lb Dutch lock makes a sizable addition to the Free Jacks forward pack.

Upon signing, van den Hoven expressed his excitement in transitioning to the team as well as the city of Boston. “I’m very excited to join the Free Jacks this coming season and grateful for the opportunity to be able to wear the jersey. From what I’ve seen the rugby community over in Boston looks awesome and I can’t wait to become a part of it and take the field.”

After moving to New Zealand in 2017 in an effort to further his rugby career, van den Hoven quickly made a name for himself, making the national championship winning Bay of Plenty U19 Provincial Squad and being named Player of the Year in his first season on the team. The following year van den Hoven was selected to train with the New Zealand U20 squad as they prepared for the World Rugby U20s Championships, a testament to the Dutchman’s performances in his adopted nation.

In 2019 the young lock played his first professional match in the Mitre 10 Cup with Bay of Plenty. The following year, van den Hoven became a regular in the starting lineup for the squad, logging 7 caps through the 2020 season.

In 2021 Stan was selected to the Chiefs Super Rugby squad where he made appearances for the development side but unfortunately did not make his debut during the COVID hampered season.

“Stan really epitomizes the Free Jacks identity,” expressed Free Jacks Assistant Coach Mike Rogers. “He is hard-working, physical and has a real love for the game. I’m looking forward to seeing Stan represent the Free Jacks with pride and plenty of Dutch passion. He is a big man who will certainly make an impact in the MLR.

With plenty of experience around New Zealand locking down tough competition in the NPC, van den Hoven’s aerial skills and physicality will be an incredible asset to the New England second row. Keep an eye out for the Dutch lock as he bolsters the Free Jacks pack in the 2022 MLR season.