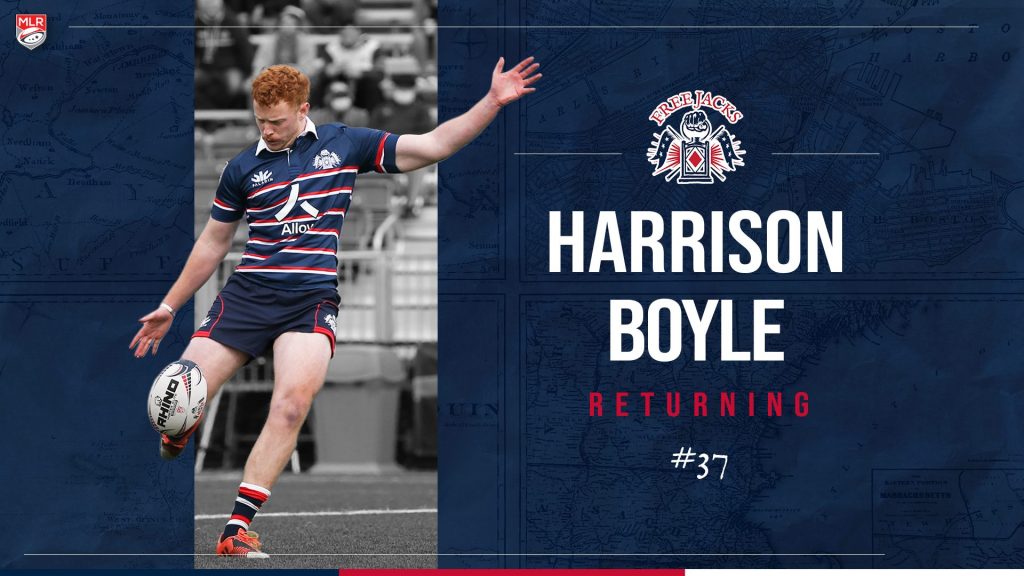 “Originally born in Boston, the “Red Ghost” returns aiming to float past defenders in 2022

Boston, MA — November 11, 2021 — The Free Jacks are excited to welcome back the Boston-born backline threat, Harrison Boyle to the squad in 2022. The 6’4, 210lb 21 year-old brings valuable versatility to the New England backline equipped with a broad NZ rugby honed skill set.

Primarily a fantastic flyhalf, Boyle’s ability to also play other positions such as center and fullback gave the Free Jacks lineup plenty of options to work with in 2021. Equipped with a quality kicking game, New England got plenty of mileage out of Boyle’s boot during his debut MLR season. Ranking 15th in the league in kicking meters, Harrison launched the ball 2,291m through 73 kicks last season, with his deft short kicking game regularly setting his teammates up for some eye-catching tries. Not afraid of contact, Boyle broke 11 tackles in his 13 games played while successfully making 80 on defense across the season.

“It’s great to have Boyler back for year two in his place of birth, the great city of Boston,” Free Jacks Performance Director Tom Kindley commented. “Harrison is of great pedigree having enjoyed a great high school career as pivot for St Patrick’s College, Silverstream, and making the NZ U20 Development camp in 2020, a testament to his playing ability.”

“Harrison adds a lot of value across the board, a switched on and likable bloke off the field, he also adds a point of difference utilizing his size and bravery as a 10 and can operate across a multitude of positions when required (this year seen in the 12 and 15 jerseys also). At only 21 he has a huge career ahead and we look forward to seeing him grow in confidence.”

Boyle moved with his family to Wellington, New Zealand shortly after being born in Boston. It was there that he began his rugby career playing for Hutt Old Boys Marist Rugby Club before attending St Patrick’s College in 2013. In 2018, Boyle moved to Dunedin where he attended the University of Otago and played for the Dunedin Sharks.

Originally a member of the Otago Rugby Academy, the skilled flyhalf earned his professional debut for Otago in a Ranfurly Shield defense against North Otago in 2019 and made his Mitre 10 Cup debut against Northland in 2020.

Harrison was selected as a part of the New Zealand U20’s squad set to compete at the Junior World Championship in Italy before the event was cancelled due to Covid.

At only 21 years of age, Boyle has a lot of potential as a game managing flyhalf. His size and tenacity on the field steered the Free Jacks in the right direction throughout the 2021 season. As we head into the much anticipated 2022, look to see Boyle carve up the pitch at Veterans Memorial next year.