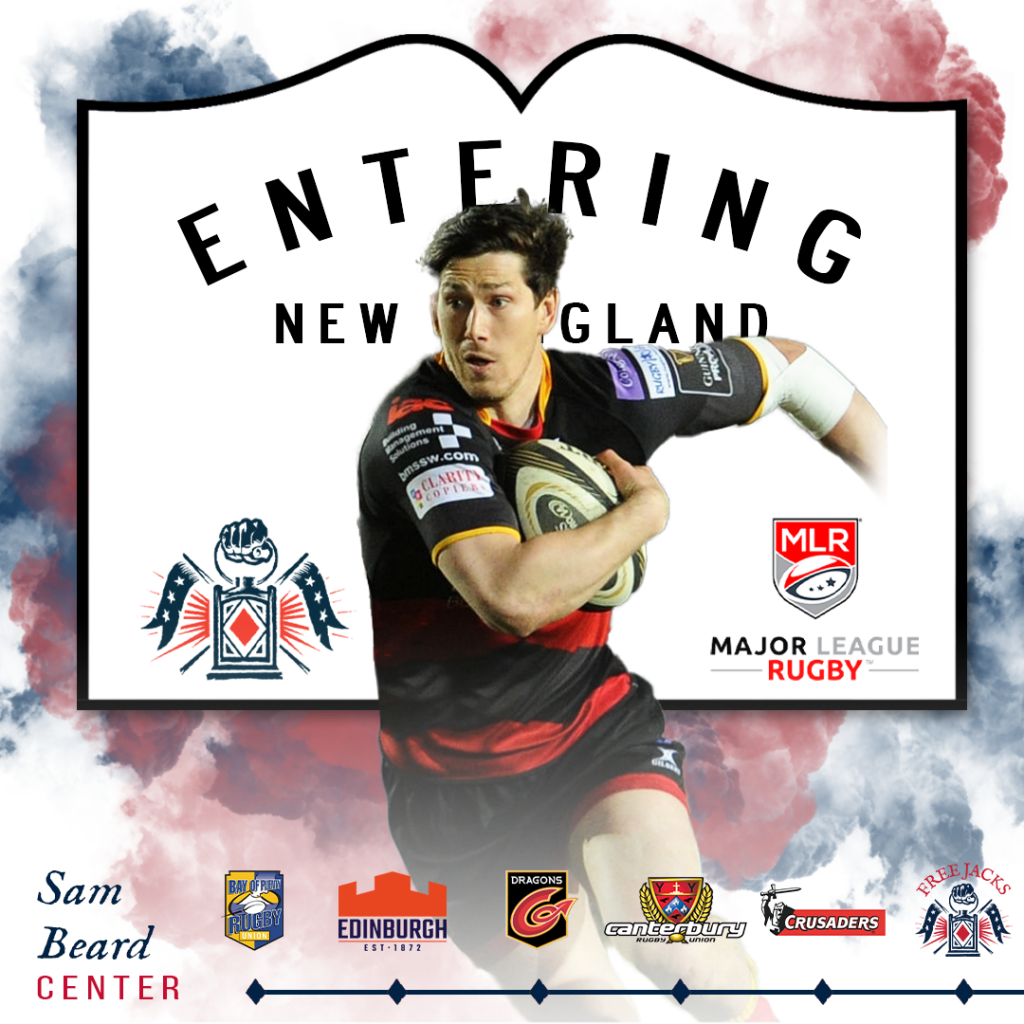 Sam joins the Free Jacks with experience in Super Rugby, Pro 14 and the Mitre 10 Cup

Boston, MA – The Free Jacks are excited to announce the signing of Canterbury mid-fielder, Sam Beard, for the 2020 and 2021 seasons in Major League Rugby. The Timaru, New Zealand-born midfielder joins the Free Jacks having most recently played for Canterbury in the Mitre 10 Cup in New Zealand and having made his debut for the Crusaders in 2018.

“I’m really looking forward to this new opportunity with the Free Jacks in Major League Rugby,” said Sam. “It’s exciting to be a part of this a new challenge to build rugby at the professional level in the US. This year is completely unique as the team is coming together for the first time and the season ahead can be anything the players and coaching staff want it to be, provided we work hard.”

Sam featured prominently for Canterbury in the 2018 Mitre 10 Cup season having played all 12 regular season games and helped guide the squad to the Premiership final against Auckland. In the same year, Sam made his debut for Super Rugby’s Crusaders in the team’s international fixture against a touring French Barbarians squad. He again ran out with the Christchurch based champions in their game against Western Force in 2018.

Prior to gaining his southern hemisphere experience, Sam represented Pro14 side Edinburgh for three seasons from 2013 to 2016, making 44 appearances and reaching the European Challenge Cup final in 2015. He then went on to play for the Welsh based Pro14 side, Newport Gwent Dragons between 2016 through 2018.

“Sam is going to be a great addition to the Free Jacks backline,” said head coach, Josh Smith. “Sam brings attacking strength to the team and won’t be afraid to speak up and show what it takes to put in the hard yards on and off the field throughout the season.”

Sam, a 6ft 210lbs inside and outside center, got his start in rugby at the age of 7 playing with his older brother in the U9 side at the Timaru Old Boys. After a successful season with his home club side Burnside in 2012, in which the team won the Hawkins Metro Premier Competition, Sam was rewarded with selection to the Canterbury B side and Crusaders development selection squad. He made his professional debut with Mitre 10 Cup side Bay of Plenty in 2013 before heading to the UK to pursue his professional career.

Whilst balancing his on-field rugby performance, Sam has built a foundation of coaching and leadership experience. Earlier this year Sam took on a coaching role at his previous Welsh squad, Newport Gwent Dragons, coaching the under 16 combined side. He has worked with charities such as School of Hard Knocks, and various clinics and schools across the UK to use rugby and sport as a tool to build social inclusion to empower and motivate young kids to better themselves inside and outside the classroom. He is currently a coach at Wycliffe College in Gloucestershire, England.

At the same time, Sam is pursuing an Honors Bachelor’s degree in Business and Enterprise in Sport from Edinburgh Napier University and has continued to balance his studies with his rugby throughout his professional career.

Sam will join the Free Jacks at the commencement of pre-season training this December and we are looking forward to welcoming Sam into an excited rugby community here in New England.

Be sure to secure your Founding Member season tickets to catch Sam and the Free Jacks in their inaugural 2020 season in Major League Rugby while seats are still available. Details of season ticket packages can be found at freejacks.com.