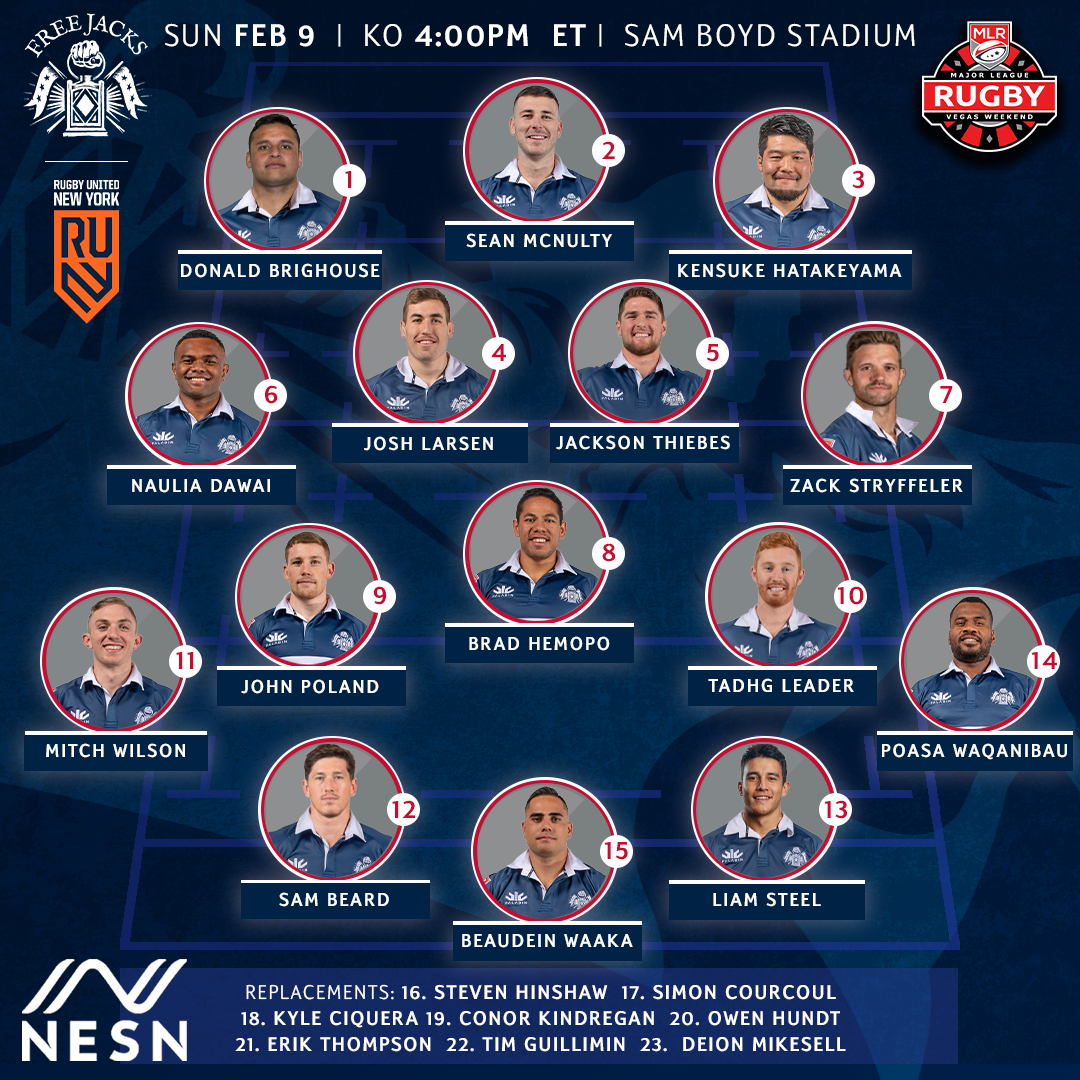 The Free Jacks have been hard at work since the beginning of preseason in preparation for this weekend’s fixture. Snowy adventures, preseason matches, conditioning and training sessions have prepared the squad for their first test in Major League Rugby.

A number of Free Jack’s players will make their debut in Major League Rugby when they run out in the Red, White, and Blue of New England this Sunday. 16 players of the 23-man roster will be competing for the first time MLR with both domestic and international, young and veteran players coming together on this Free Jacks side.

Kensuke Hatakeyama and Donald Brighouse lend considerable experience at the front of the Free Jacks forward pack, both having showcased their scrumming abilities and dynamic playing style in the two preseason matches. Sean McNulty, US-Irish hooker, joins the pair in the front row.

Recently announced team captain, Josh Larsen, and 2019 exhibition season standout Jackson Thiebes, pair up in the second row, creating one of tallest Lock-combos in the league, while completing a tight-five with notable experience and power.

Flanking either side of the pack will be dynamic international Fijian flanker, Naulia Dawai, and MLR veteran and workhorse, Zach Stryffler. Brad Hemopo earns a position at 8-man and will look to make an impact in his first game for the Free Jacks.

New England’s backline will feature a host of talented players including Tadhg Leader at Fly-Half. The USA-Eagle playmaker will look to set the pace of the attack against one of the league’s top defenses from last year. The former Irish U-20’s standout has been a consistent performer for the Free Jacks last year and throughout preseason and his return to MLR is sure to see Tadhg continue to lead from the front.

Scrum-Half John Poland will join Tadhg in the first-five role earning the start in the 9 jersey. The explosive combination of Sam Beard and Liam Steel in the Centers will provide a varied and electric one-two punch for both Leader and Poland to look for to find holes with and pierce Rugby United’s defense. Sam’s vision and playmaking ability further makes him an exciting player to watch.

All-American and Life University standout, Mitch Wilson will have his first opportunity to explode onto the Major League Rugby scene. Mitch is quickly becoming known for his shifty speed and acceleration on the outside, which was put on full display the last two weeks in front of fans at Union Point. Poasa Waqanibau and Beaudein Waaka complete the back 3 with their versatility and speed.

The full 23-Man roster for Sunday can be found below:

About New England Free Jacks:  The New England Free Jacks are greater Boston’s 1st Professional Rugby team representing all the greatness of the six New England states on and off the field. The Free Jacks were named the 9th member of Major League Rugby on September 20th and will compete in the 2020 MLR regular season. For more information please visit www.freejacks.com