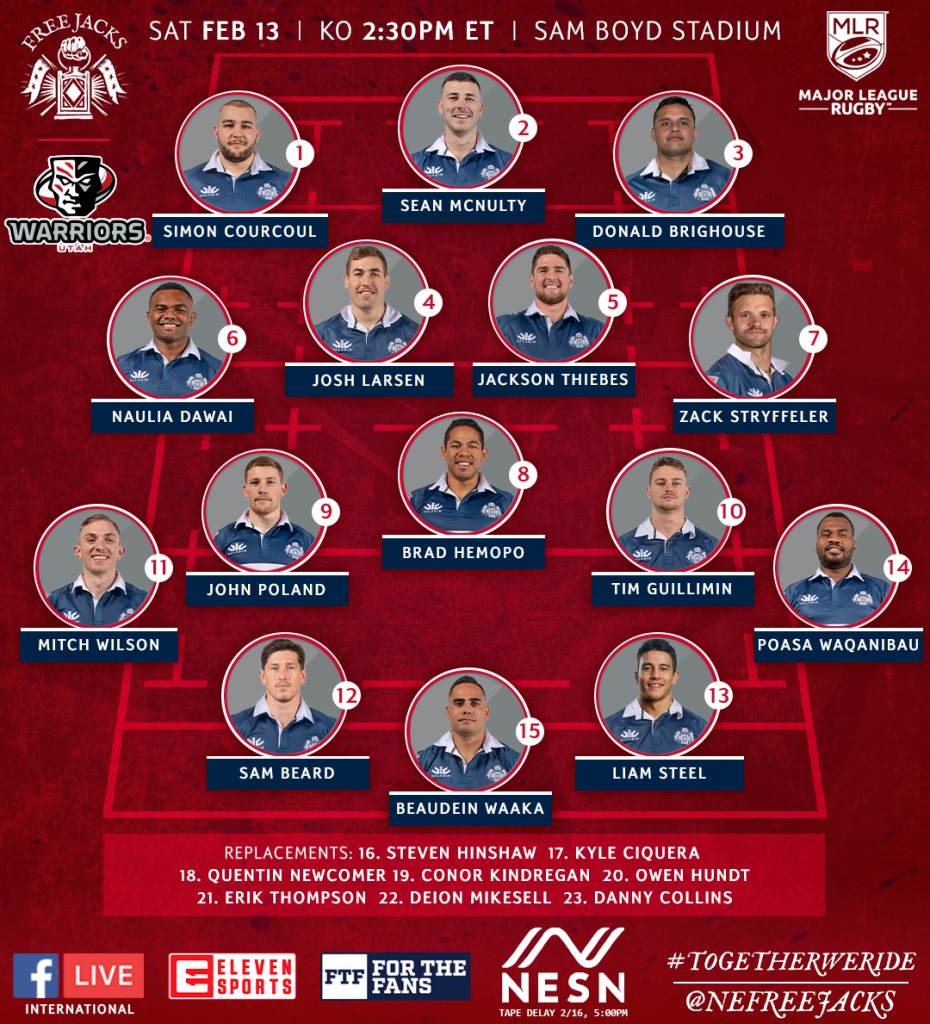 Head Coach Josh Smith has announced the 23-man roster that will be taking the pitch against the Utah Warriors on Saturday, February 15th, at Sam Boyd Stadium in Las Vegas, Nevada, as part of Major League Rugby’s Vegas Weekend.

2 changes have been made to this weekend’s starting XV, with starting appearances for both Free Jack Frenchmen, Timothee Guillimin and Simon Courcoul.

Front row forward Simon Courcoul, who made an impact in the second half in last weekend’s match, will step into a starting role at Loose-Head Prop, while Donald Brighouse, moves into the Tight-Head spot in place of the inactive Hatakeyama. Sean McNulty will retain his starting role at Hooker.

The second row engine room is unchanged. Team Captain Josh Larsen and Jackson Thiebes will once again pair up in a powerful combination. Both showcased their natural ability in the lineouts and dynamic play around the field that contributed to The Free Jacks’ win over RUNY.

No change to the exciting back three from week 1. Naulia Dawai and Zack Stryffeler start at 6 and 7 respectively, while week one’s Try of the Week (and maybe of the century) recipient Brad Hemopo will provide the extra support at 8-man.

Former Irish U-20 standout, John Poland, retains the scrumhalf jersey after a gutsy performance in the team’s opener. John will combine with Tim Guillimin who steps into the no.10 jersey and will look to direct the Free Jacks’ set piece and attack.

Sam Beard and Liam Steel return in the centers and will try to replicate their performances from last Sunday. Back three of Mitch Wilson, Poasa Waqanibau and Beaudein Waaka will again challenge the Utah defense and test the space in the wide channels.

Meanwhile, the Free Jacks’ bench will feature some of the familiar names from last week including Steven Hinshaw, Kyle Ciquera, Erik Thompson, Deion Mikesell, Owen Hundt, and Conor Kindregan, as well as some new ones. Danny Collins, and Quentin Newcomer have joined the team in Vegas.

The 23-player roster can be found below: