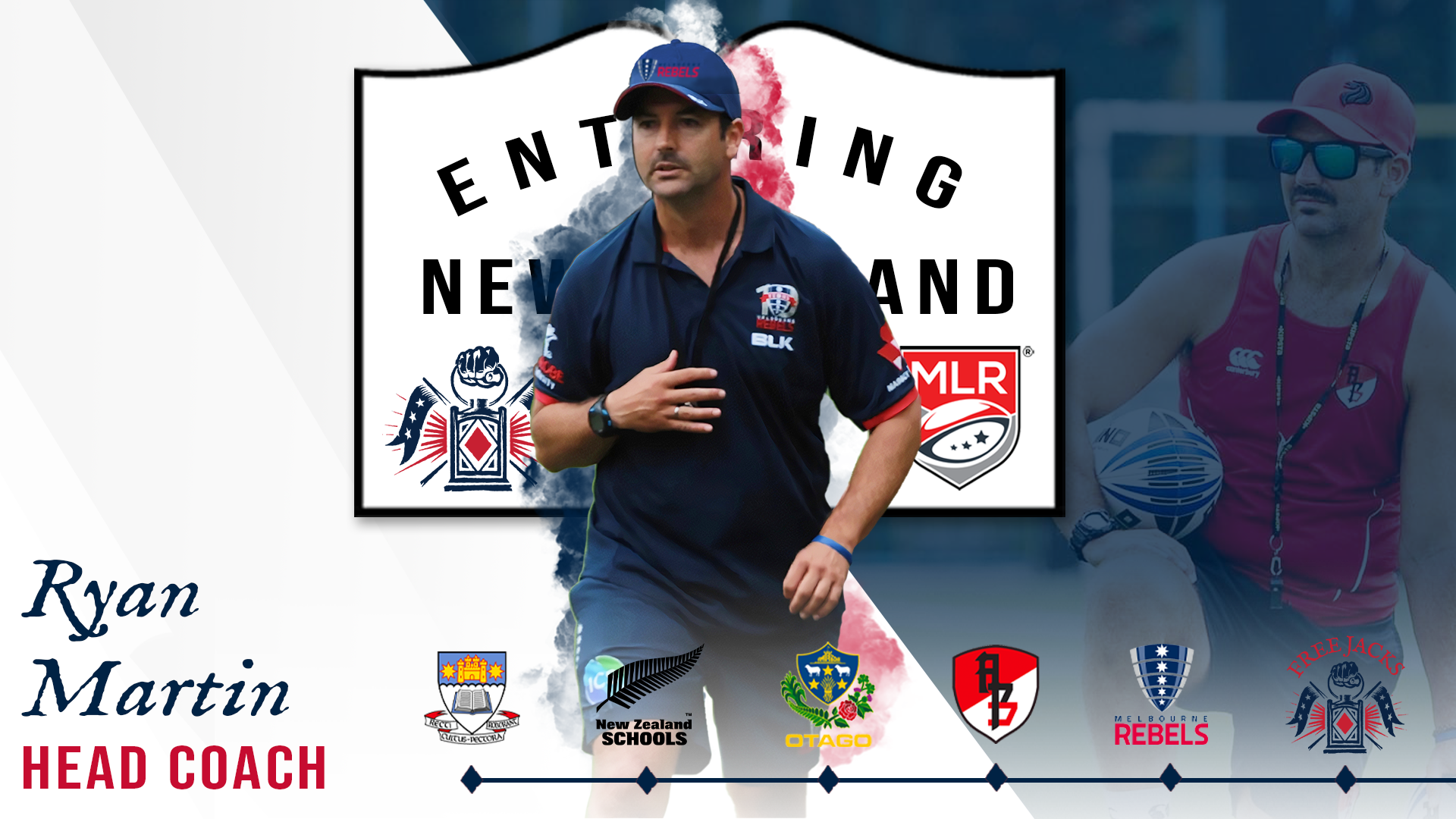 BOSTON — July 28 2020 — Free Jacks are excited to announce the signing of Ryan Martin as Head Coach of the New England Major League Rugby team for the 2021, 2022 and 2023 seasons. Martin will join the Free Jacks with an impressive coaching pedigree and as an expert in skill acquisition, a creator of novel attacking systems, and an experienced educator with a 17-year background in teaching. His experiences across all levels of the game combined with a passion for player development sees Martin well equipped to prepare the Free Jacks for the upcoming MLR season while concurrently developing the game across New England.

“I’m thrilled at the opportunity to join the Free Jacks team and continue to build on both the rugby history and extensive sporting legacy that exists in New England,” commented Ryan. “We have a special group of good people and great rugby players and it excites me to now have the opportunity to instill the work ethic and culture of the region into every member of the Free Jacks team. I’m excited to get started and develop the framework for skill progression at individual levels across the Free Jacks system.”

Martin is a modern-day attack coach and has been trademarked by his multi-laned, ever-changing attacking style. Most recently while with the Melbourne Rebels, Ryan has taken advantage of the Super Rugby team’s shared training ground with the Melbourne Storm and incorporated elements of rugby league into his attacking systems. Working with colleagues such as innovative defense coach Ben Herring, mastermind David Wessels and former British and Irish Lion, Geoff Parling, Ryan has enhanced his talents as a coach and will lend those skills to the Free Jacks’ on field performance.

A former schoolteacher, Martin began his coaching career in New Zealand at the Under 10 level in 2008. In 2011, Martin became coach of his alma mater Otago Boys High School, and in 2012 led the team to the national finals. In his 5 years in that role Martin maintained the team’s position in the top echelon of New Zealand Rugby and won 64 games on the trot. In 2016, Martin was nationally recognized and assumed the head coaching role of the New Zealand Barbarians Schools side, working with the future talent of New Zealand Rugby at the international level where he led the Baba’s to an undefeated record against both Australian and Fijian Schools.

It was in 2018 while juggling multiple positions and a school teaching job when Martin was called up to the Otago Mitre 10 side as attack coach. Ryan’s lane-based attacking strategy played a key role to Otago winning the Ranfurly shield in 2018, an achievement that included 2020 Free Jacks captain Josh Larsen. Otago went on to retain the Ranfurly shield for 9 matches.

“We are thrilled to welcome Ryan to our burgeoning and passionate Free Jacks community. With his wide-ranging background he has had to learn to manage and thrive in a diverse set of competitive pressures. As a coach he has worked with players of all ages and abilities, focusing on enhancing healthy behaviors, building new skills, and developing people,” said Alex Magleby, CEO and Co-Founder of the Free Jacks. “And as an educator Ryan has the proven pedagogical competencies needed to drive knowledge transfer, bring new ideas to life and inspire a team around core beliefs, systems, and work ethic.”

In addition to directing the performance of the Free Jacks in Major League Rugby, Martin will assist in the development of rugby at every level in New England.

“I’m looking forward to working on and helping to enhance pathways for domestic players in New England. Growing the game at every level collectively improves individuals, the Free Jacks, and future US Olympians and World Cup players, and as important creating enjoyable and fun competition at all levels.”

In this role Ryan will assist and support 2019 and 2020 Free Jacks head coach, Josh Smith, as he jumps into directing the Independents—the Free Jacks’ senior development program. Smith, a stalwart of New England rugby, will continue to build on his coaching excellence while focusing his skills on helping to develop the future players of the Free Jacks as head of the Independents.

In addition to his role as Head Coach, Ryan has committed to supporting the nascent Free Jacks Foundation as his charity of choice, as he shares in the Foundation’s mission to make a difference in the lives of children and families using the fellowship, integrity, resiliency, and empowerment that rugby can create. He is committed to the Foundation’s core goals of increasing access to facilities, identification to higher level honors, and quality coaching where those opportunities are otherwise limited.

Join Ryan and the Free Jacks for a virtual meet and greet, “news and brews” Thursday August 8/13. Grab a Free Jacks IPA and join the virtual gathering and get to know the newest Free Jack. RSVP using the link here: https://freejacks.com/news-and-brews/.