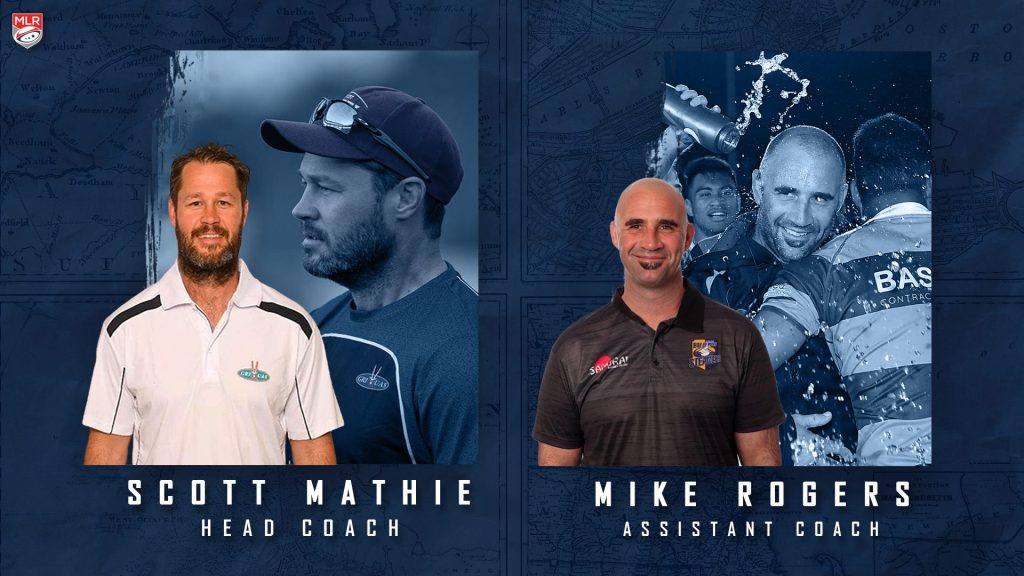 Defense Specialist, Mike Rogers, arrives in New England as having coached across the top level of the men’s and women’s game in New Zealand

BOSTON, MA — THURSDAY, SEPTEMBER 9TH — The New England Free Jacks today announced the appointments of the highly skilled Scott Mathie and Mike Rogers to the coaching staff for the 2022 Major League Rugby Season (MLR) and beyond. Mathie, assuming the role of head coach of the Free Jacks, will bring a history of player and people-focused development, innovative attacking systems, and the curation of exceptional team environments to bring out the best in players in New England. Rogers will join the Quincy, Mass., based Free Jacks as the senior assistant coach with forwards and defense oversight, bringing a wealth of coaching experience from New Zealand’s Mitre 10 Cup and Super Rugby.

“Our players, supporters, and staff really are developing something exceptional and unique here in New England. Scott and Mike bring another layer of talent and unique skills to what is fast becoming such a special experience for so many of us,” said co-founder and CEO, Alex Magleby. “Both quality people, with tremendous rugby nous, I’m really excited to see the impact they will have on our burgeoning community, with not only Free Jacks players and supporters but also developing coaches in the region. On behalf of Free Jacks everywhere, a warm welcome to Scott, Mike, and their families.”

A promising coach on the rise at the cutting edge of the modern game, Mathie will look to build on his experience as head coach of the Griquas in South Africa’s Currie Cup and SuperSport Rugby Challenge. Known as a “giant killer” for leading his side to resounding victories over Super Rugby level opponents, Mathie will bring to the Free Jacks his experience as head coach and previously assistant coach of the Griquas, director of rugby and head coach at Durban High School, Durban Collegians attack and backs coach, and Sharks Academy head coach.

An experienced player, familiar with the qualities of a professional environment, Mathie gathered a wealth of knowledge having previously represented the Sharks and Bulls at Super Rugby and Currie Cup levels as a top-level scrumhalf, before going on to play for Sale Sharks and Leeds Carnegie in the English Premiership.

“It is a massive honor to take up the head coaching role of the Free Jacks, and the family and I are very excited to begin this journey. I’ve always been inspired to pioneer new things and the opportunity to build on the already strong foundation laid here in New England is something that really speaks to me,” commented Mathie on his appointment. “Rugby is a game that brings us together and builds relationships that last forever. We want to foster that culture and to continue to develop our players and our community on and off the field. Combining my own and Mike’s extremely competitive nature we hope to build a successful culture and ultimately develop a world class team in line with the rich history of New England sport.”

“It’s a great opportunity to join the Free Jacks and be a part of a team working hard to create a legacy,” noted Mike. “I care deeply about the people I work with and the community we are a part of, and I love coaching because it’s about the people, and the relationships you build to bring out the best in everyone around you. My hope is we can establish the Free Jacks as the people’s team, where players will continue to want to be here because they love the environment, and everyone can see the hard-working, humble, and connected-with-our-community work ethic of every member of the organization.”

Proven at the top echelon of their respected nations, the Free Jacks are excited to welcome both coaches to the Boston area and will look to expand the rugby staff in the coming weeks.

“We are thrilled to appoint Scott and Mike to build on the strong foundations laid during the 2021 Major League Rugby season,” commented Free Jacks Performance Director, Tom Kindley. “Both are well-rounded, current, and innovative coaches that will bring a point of difference to the Free Jacks in Major League Rugby 2022 while developing players for the future. Scott and Mike have successfully demonstrated their effect on the people around them as coaches at various levels, ages, and abilities, focusing on enhancing healthy behaviors, building growth environments, and developing people.”

In addition to their roles as coaches of the professional team, Mathie and Rogers are committed to assisting in the development of rugby at various levels in New England. With experience at the high school and academy levels, both coaches are looking forward to working with players and coaches in the Free Jacks Academy, Regional Training Groups, and learn-to-play initiatives to foster the development of young players.

Join Scott and Mike and the Free Jacks for Free Jacks Live on Wednesday, September 29 to get to know the newest Free Jacks coaches.