Boston – August 19, 2021 – With the 21st pick in the second round of the 2021 Major League Rugby Collegiate Draft, the Free Jacks are proud to select Anthony Adamcheck. The 5’11, 275 lbs prop brings grit and tenacity to the New England front row.

“We are excited to add ‘T-Mobile,’ as he’s fondly referred to by his Penn State teammates, to what is already a powerful group of New England Props,” said Free Jacks Performance Manager, Tom Kindley. “Hailing from Newtown CT, it’s great to bring New Englanders into the fold and we think the 2x Collegiate All-American candidate can add real value to our pack in due course.”

Graduating from Penn State with a degree in Information Sciences and Technology, “Big Tony” Adamcheck made a big impact in the PSU forward pack. While Penn State Adamcheck was recognized as a three time D1A Rugby East All-Conference team member, two time USA Rugby Collegiate All-American candidate, as well as a USA Rugby Collegiate All-American honorable mention. On top of these impressive feats, Anthony boasts that he is undefeated in dance battles, with over 100 victories under belt.

A local New Englander, Adamcheck was raised in Newtown, Connecticut. He has always had a deep appreciation for the sport which has allowed him to truly excel as a player: “Rugby is the greatest sport on earth to me, each player has to be complete, meaning they must catch/pass, kick, tackle, ruck, for 80 glorious minutes of hard collisions and fast paced lines. I love scrumming, I love nothing more than having the weight of my pack behind me, looking across at my sweaty, often hairy, mouth breathing opponent and dominating him with a perfect blend of technique and pure force.”

Though Anthony clearly has a sense of humor, he is extremely devoted to helping grow the sport that gives him so much joy in his home country. “I want to be an example of an American born kid, entering the game as a freshman in Highschool, falling in love with it, and doing everything he can to improve the sport and brand of American Rugby.”

The self proclaimed “Supervisor of Team Morale” back at Penn State, Anthony looks to not only bring plenty of charisma to the team, but also a solid option in the front row for the 2022 Free Jacks. 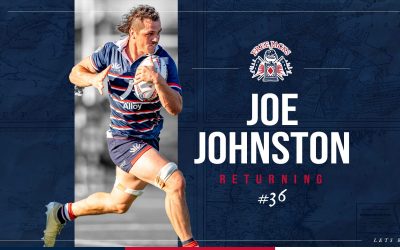