Free Jacks ‘Forward Of The Year’, Erich De Jager, Back For Second Year In New England 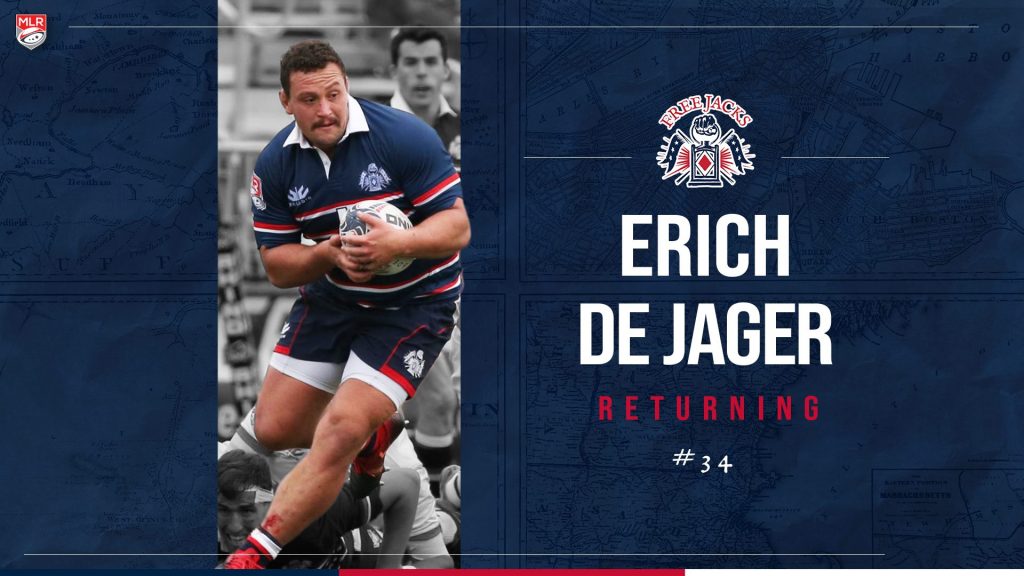 The South African Tighthead, “Tarzan” looks to swing back into action right where he left off in 2022

Boston, MA — November 15, 2021 — The Free Jacks are looking forward to welcoming back powerful Tighthead Prop Erich de Jager. The 24-year-old, 6’2”, 260lb South African made a monumental impact in the New England front row in 2021 and he will be looking to build off what was a great debut season in the MLR in 2021 .

Utilizing all of his Currie Cup and Pro14 experience, de Jager proved to be a top MLR forward during the 2021 season. Busy in the breakdown, Erich finished with the 8th most breakdown steals in the league with a total of 8 and found the tryline on two occasions. His bullish defensive abilities secured 98 tackles through the season, proving it difficult for attack across the leagues to breach the gain line in his vicinity. He also backed up his team with 206 brutal attacking ruck arrivals, a testament to his busy mentality on the pitch.

“Erich had an outstanding debut year within MLR picking up our ‘Forward of the Year’ award, a testament to his dependability week-in and week-out,” commented Free Jacks Performance Director, Tom Kindley. “A great scrummaging tighthead and pillar of the pack, Erich also impressed around the park, showing some deft touches and inspiring his teammates on defense. A really kind, easy going bloke, we are looking forward to seeing his game continue to develop this season.”

Born in Port Elizabeth, South Africa, de Jager represented the local Eastern Province Kings as a young player. In 2016, de Jager was selected to the Free State Cheetahs XV squad where he played 8 matches before making his Currie Cup debut for the Cheetahs in 2017.

De Jager was a member of the Toyota Cheetahs during the 2017 Pro14 season as well, playing an integral role in the Free State front row. The robust tighthead prop eventually helped bring the Cheetahs to the 2019 Currie Cup Finals starting with a great performance where they defeated the Golden Lions to hoist the Currie Cup Trophy.

The Free Jacks scrum remains sturdy with de Jager’s return. A crucial member of the New England forward pack, Erich de Jager provides a superb defensive presence that will aid in the success of the Free Jacks. Prepare for a phenomenal season from “Tarzan” as we head into the 2022 MLR season.