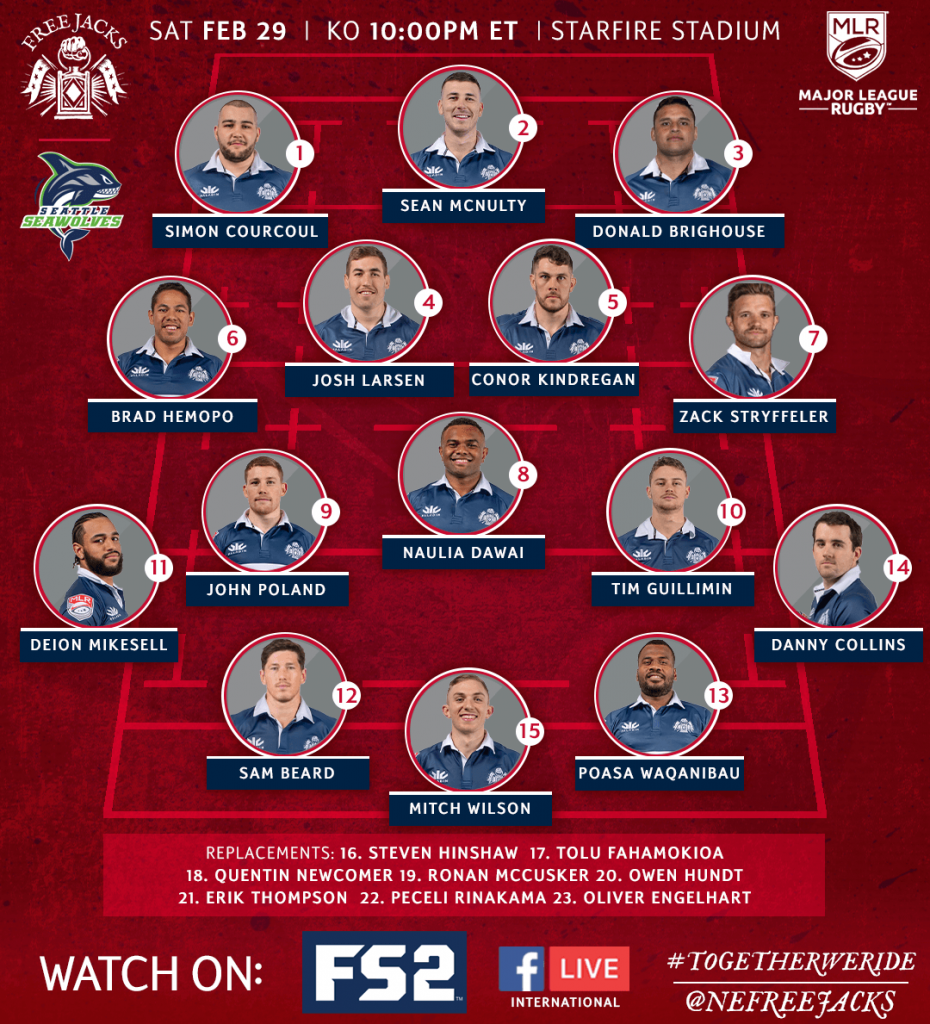 The Free Jacks have announced the 23-player roster to face the Seattle Seawolves this Saturday at Starfire Stadium. The Free Jacks are looking to build upon their first three games in Major League Rugby, having put on impressive performances yet coming away with one win (v. RUNY) and two narrow losses (v. Utah Warriors and San Diego Legion).

The front row is unchanged from last week’s roster that took the field in San Diego. Simon Courcoul starts at loose head prop with Sean McNulty in the hooker position and Donald Brighouse at tight head.

Team captain Josh Larsen and work horse Conor Kindregan will start in the 2nd row. Conor who last week who last week showcased his impressive versatility at blind side flanker, will step into the number 5 jersey while Jackson Thiebes spends the week in recovery.

Brad Hemopo earns the start at blind side flanker, paring with Zack Stryffeler at open side. Naulia Dawai will again play at 8-man having proven to be a tenacious physical force in the game’s defensive and attacking phases.

Ireland U-20 standout, John Poland, will continue his role at the scrumhalf position, working in-sync with Fly-Half Tim Guillimin to ensure one of the league’s top scoring Attacks remains consistent. So far this season, the Free Jacks have averaged 29.3 points a game, to go along with a Gain Line Over percentage north of 80%.

The remainder of the backline sees no change from last week’s clash with San Diego. Deion Mikesell (11) and ‘Switchy himself, Danny Ice (14), will look to threaten the defending champs on the outside with their mutual blend of speed and power.

Sam Beard and Posa Waqanibau, who last week were at the forefront of the near comeback against last year’s league runners up, will start in the centers. Mitch Wilson has earned his third straight start at Fullback and is apt to provide as impactful a performance on defense as he is on the attack.

The full roster can be seen below:

Unavailable for selection this week: