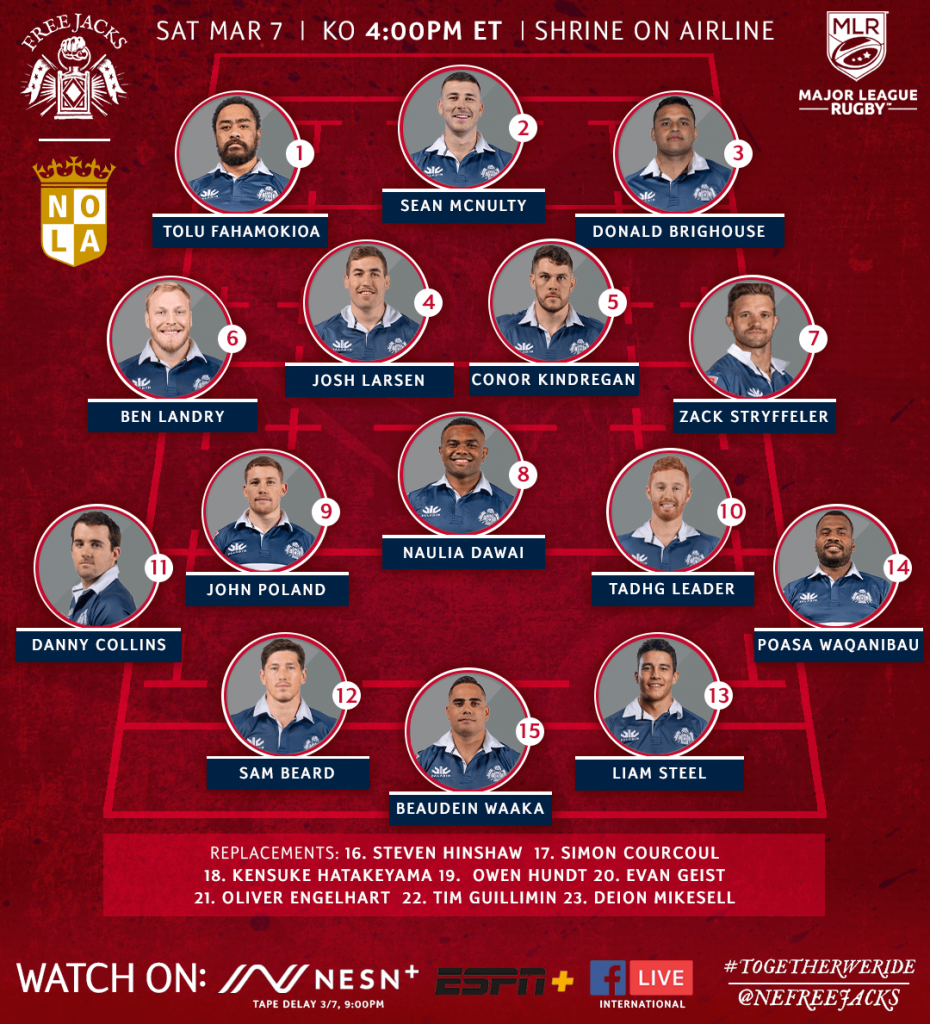 The Free Jacks have announced the 23-player roster to face NOLA Gold in our first match against an eastern conference opponent since our opening win over Rugby United New York. The match kicks off this Saturday March 7th at 4:00pm Eastern.

The game is the team’s final stop on what has been a five week road trip to begin the inaugural season, and will see the return of a number of key players from injury.

The engine room in the second row sees no change from last week, with Josh Larsen and Conor Kindregan kicking off at the 4 and 5 spots. Rounding out the pack, USA Eagle standout and recent addition to the Free Jacks playing roster, Ben Landry, will make his debut at Blind Side Flanker. Zack Stryffeler will again done the 7 jersey at open side flanker and Naulia Dawai will carry on with his role at 8-man, where he makes his third such start of the season.

Acting as the link between the forwards and backs, John Poland will look to replicate his strong performances in previous matches in the scrumhalf jersey.  Tadhg Leader makes his return to the starting lineup at Fly-Half.

On the left wing , Danny Collins will continue to leave a mark on the attack, after bringing Free Jack fans to their feet last week with a fantastic line-break try. Meanwhile, utility back, Poasa Waqanibau will have his back at right wing.

Bringing back the exhilarating one-two punch fans witnessed week one vs New York, Sam Beard reunites with Liam Steel at the inside and outside center positions. Sam has been providing his own spark to the attack thanks to a high rugby IQ and a demonstration of acute field awareness and continue to lead the team from the midfield.

Beaudein Waaka makes his much anticipated return to the lineup, after playing a big role in the team’s opening day victory in Las Vegas. In one game, Waaka scored two tries, while slotting one subsequent conversion. Only Tim Guillimin leads him in points scored for the Free Jacks this season.

Fans will also be happy to note, that despite not being present within the starting XV, capped Japanese National Kensuke Hatakeyama will make his return off the bench Saturday, after taking the last few weeks off to deal with a lower body injury.

The full roster can be seen below:

Unavailable for selection this week: