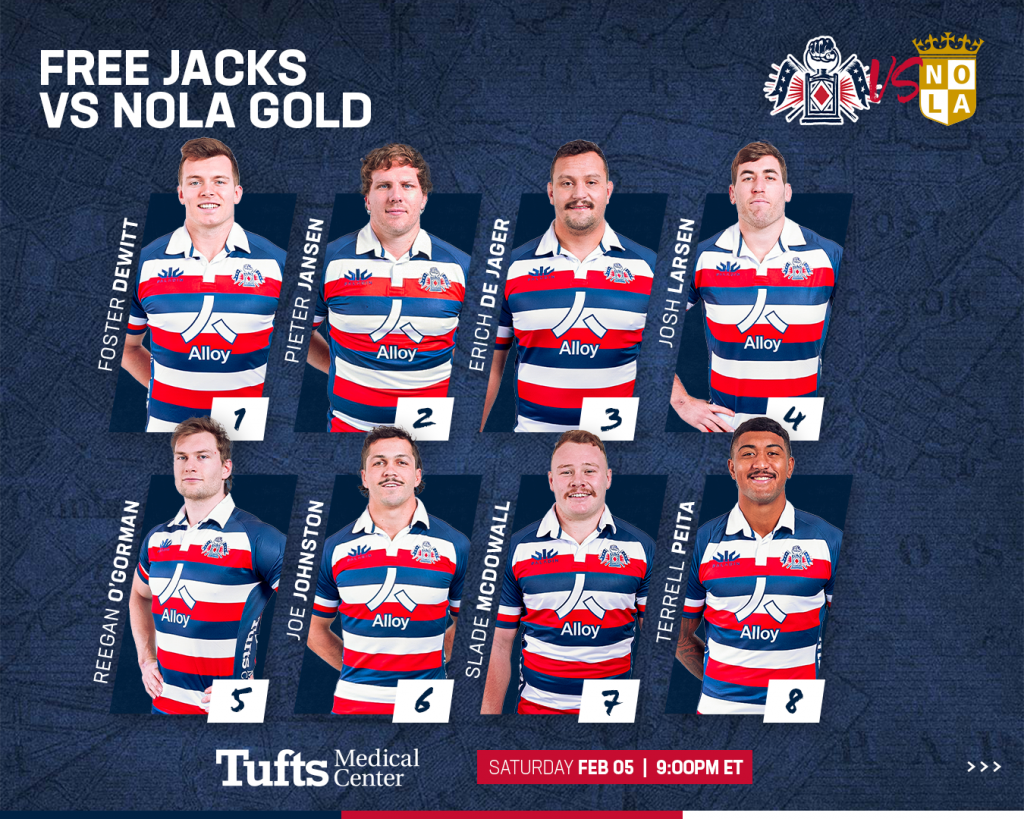 Free Jacks travel to New Orleans to continue to prepare for the first match in Major League 2022 at Gold Mine on Airline on Saturday (9.00pm KO).

Free Jack second row, Josh Larsen is set to captain the squad in the first match of MLR 2022. The Free Jacks are looking to apply the learnings from a robust and intense preseason in the opening round of the national competition and set a platform to launch into the season from.

The starting XV features 7 new additions to the Free Jacks squad, with new players adding versatility, power and experience across key positions on the field.

Canadian international, Foster Dewitt, earns his first appearance for New England in the no. 1 jersey. He is joined by stalwarts Pieter Jansen and Erich De Jager to make up a strong front row for the Free Jacks.

Larsen is joined by his Canadian international teammate, Reegan O’Gorman in the second row. A dynamic and determined back row is composed of Joe Johnston and newcomers Slade McDowall and Terrell Peita.

The Free Jacks backline is sure to build on the creativity seen in the 2021 season with John Poland (Scrumhalf) and Beaudein Waaka (Flyhalf) leading from the front. Le Rou Malan and Jack Reeves will be looking to add instant impact in the Free Jacks jersey in the midfield, while MLR line-break leader Paula Balekana and destructive runner Harry Barlow find space on the wings. Fan favorite Dougie Fife completes the Free Jacks starting fifteen at fullback.

“We have created a highly competitive training environment in Quincy and are excited to see the product come together on the field in the first test of the season,” noted Free Jacks head coach Scott Mathie.