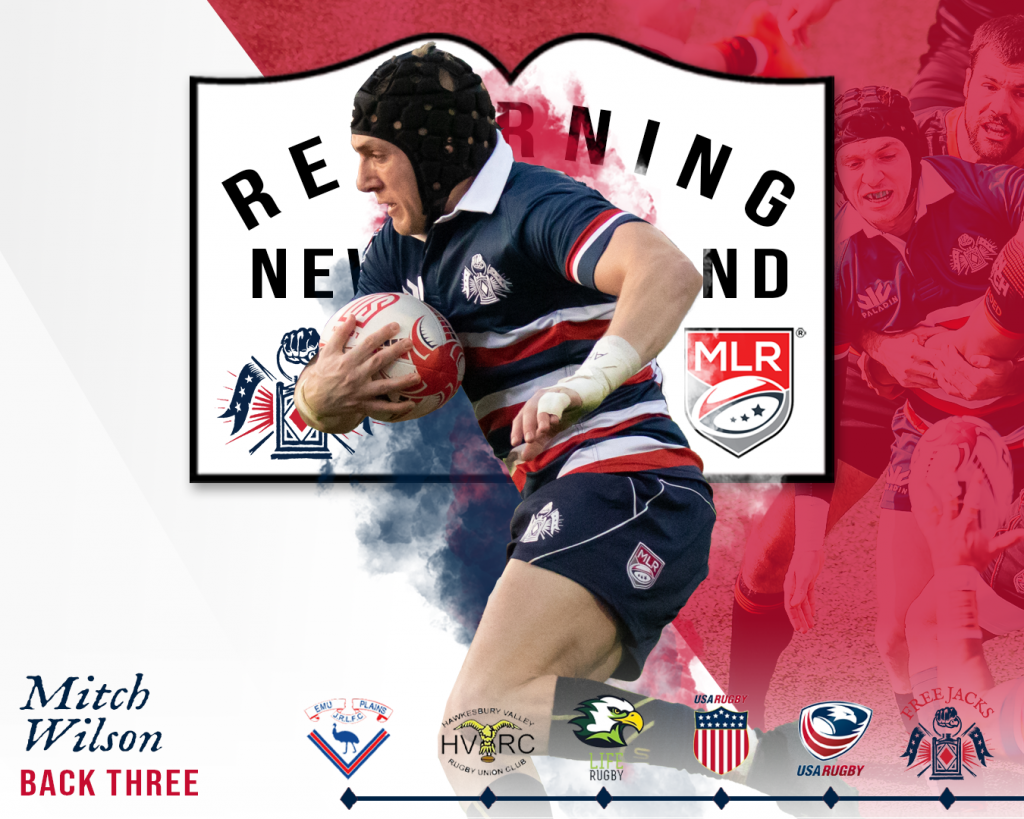 Wilson re-signs with the Free Jacks through the 2022 season

BOSTON — August 28 2020 — The New England Free Jacks are pleased to announce the return of utility back Mitch Wilson. Wilson has agreed to a two-year contract extension, keeping the versatile Australian born flyer in Boston through the end of the 2022 season of Major League Rugby.

“I’m pumped to be back with the Free Jacks for another two years,” said Wilson. “We were only just getting underway in 2020 and with the mix of new and returning talent, I can’t wait to get back with the squad and continue to build on the great work to date.”

Coming off a sublime senior year with Life University and the Collegiate All American’s, Wilson continued his excellent form into the 2020 MLR season. Wilson’s versatility across the back three was evident as the Australian was named in the starting XV for the Free Jacks’ first four matches at fullback and left wing. Wilson proved to be a potent attacking threat during his four starts, scoring tries against Rugby United New York and the Utah Warriors, and developing a knack for helping his teammates find the chalk through some freakish offloads. Wilson finished the abbreviated season with more than 250 meters made with ball in hand, breaking the gain line more than 90% of the time.

“It’s great to have Mitch back for 2021,” noted Technical Advisor, James Willocks. “One of the top domestic products who added great value in a short season last year while growing tremendously as a player and a leader. Notably, Mitch etched his name into the record books scoring the first try in Free Jacks MLR history. We are excited to see what he can produce next season.”

Born and raised in Sydney, Australia, Mitch grew up playing rugby league for Emu Plain Rugby League Club. Beginning at the Under 6 level, Mitch built a foundation of rugby skills at the Western Sydney club through his youth. At 14 Mitch made the code switch through his rugby union debut with Hawkesbury Valley Rugby Club.

Wilson garnered numerous All-American honors at Life, as he represented the United States at the 2016 World Rugby Under-20 Trophy in Zimbabwe, was named a USA Rugby Collegiate All-American four years in a row and captained the 2018 Collegiate All-American squad that handily defeated the Glendale Raptors. In 2017 and 2018, Mitch received the honor of representing the USA Selects in Montevideo in the Americas Pacific Challenge (APC) where they took on quality sides such as Uruguay XV, Tonga A and Argentina XV.

While many in the rugby community will recognize him for his on-field play, Mitch has a passion for developing the next generation of players. While at Life University Mitch acted as an Assistant Coach for Atlanta Youth Rugby, and most currently holds the position of Assistant Rugby Coach at Dartmouth College.

Join Mitch and the Free Jacks for a virtual meet and greet, “News and Brews,” on Thursday, September 10th. Grab a Free Jacks IPA and join the virtual gathering and get to know the newest Free Jacks and the returning players. RSVP using the link here: https://freejacks.com/news-and-brews/.