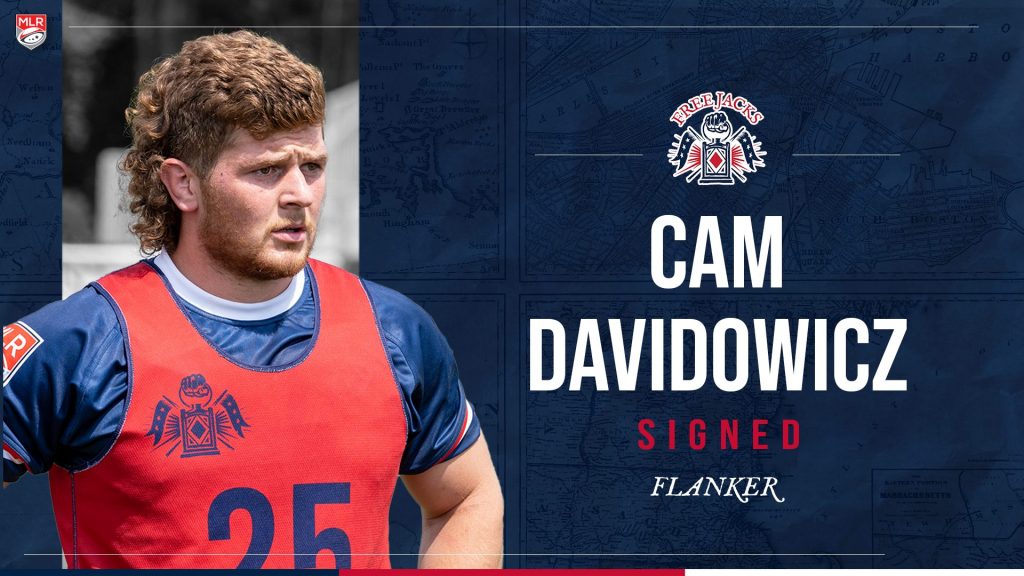 Originally a development player, the Massachusetts native signs a 2 year contract in the New England Back Row

Boston, MA — December 8, 2021 — The Free Jacks are proud to announce the signing of Cam Davidowicz to a two-year contract. Originally on the training squad, the 6’1”, 225lb back row player looks to make a name for himself within a well established New England forward pack over the coming two seasons.

“It’s an honor to be signed by the New England FreeJacks,” exclaimed Davidowicz. “It means alot to me to play for my home team. Can’t wait to take the pitch in front of my friends and family come springtime.”

Davidowicz first started playing rugby during his freshman year of High School for the Essex County Bulldogs. He went on to attend and play college rugby for the Plymouth State Norseman, earning two NSCRO All-American honors during his time at the program. While in college, Cam represented Mystic River in the Premier Summer 7s competition and has gone on to represent the Boston local team in the Division One 15s competition where he has become a standout.

Davidowicz also represented the New England Independents, the Free Jacks development program, during the 2020 season, earning man of the match in the first matchup with the Free Jacks in January of the year.

Davidowicz continued to lead the way for Mystic River during their 2021 America Rugby Premiership campaign where he played across a multitude of positions against perennial D1 powerhouses such as the New York Athletic Club, Old Blue, and the Life University Men’s Club.

“Cam impressed when he joined the Free Jacks wider squad as a training player this year and proved himself as a loose-forward with Mystic River during the 2021 ARP,” commented Free Jacks Performance Director, Tom Kindley. “He is a good local man, tough as nails, effective in contact, and surprisingly athletic. He has well and truly earned the opportunity to progress to the next level and we look forward to seeing his game develop further within the MLR.”

At 24 years old, the local back rower will look to impress the New England fanbase in his new role with the Free Jacks. Entering a new chapter in his rugby career, Davidowicz will take the pitch along with the rest of the squad in this highly anticipated 2022 MLR season.