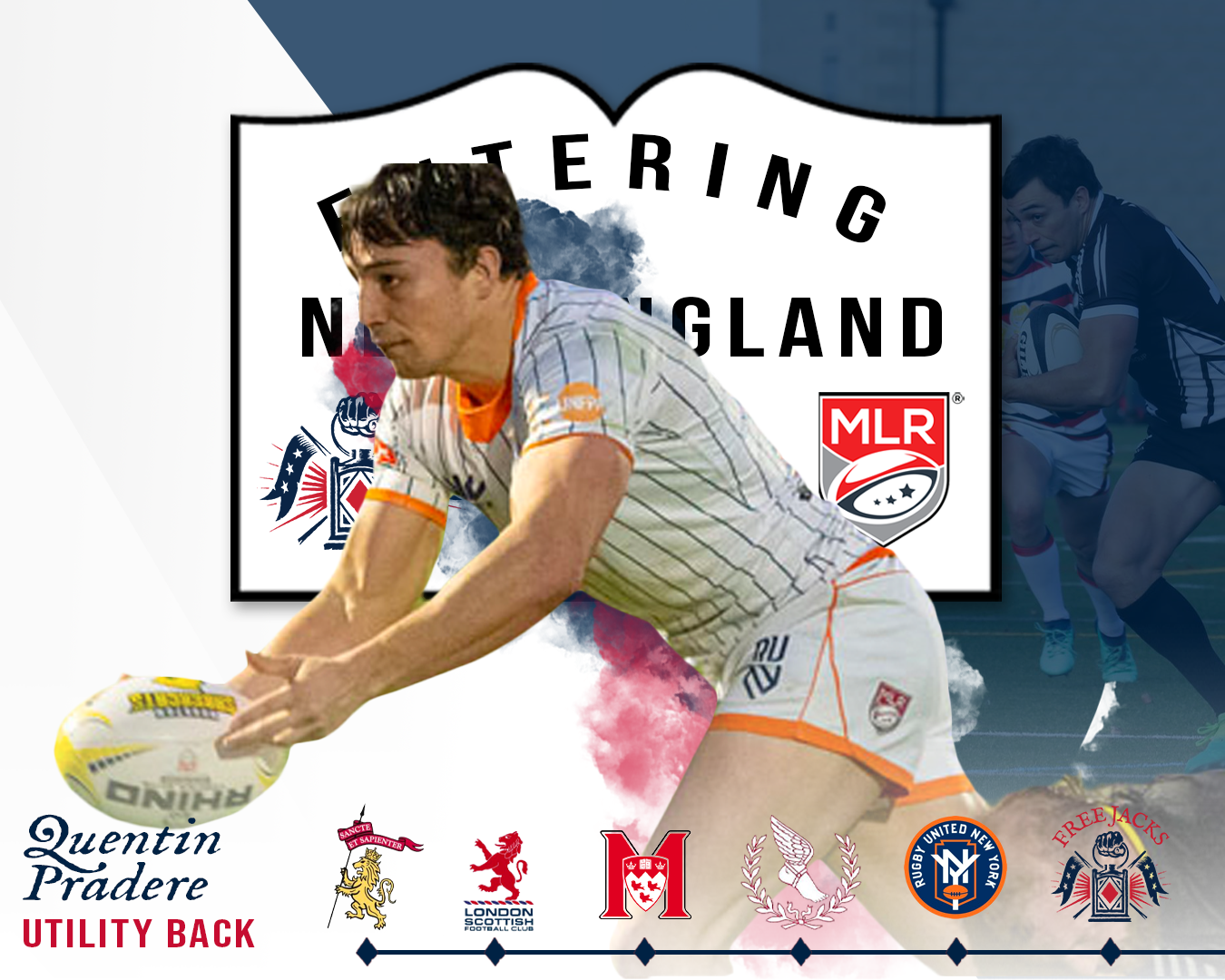 BOSTON, MA – March 10, 2021 – The New England Free Jacks announced today the signing of former Rugby United New York center, Quentin Pradere, to the 2021 playing roster for the Major League Rugby season. Pradere joins the roster having stood out as on the training field as part of of the practice squad during the Free Jacks preseason training.

“I am incredibly excited to represent New England as a Free Jack” said Quentin. “The city of Boston and the New England region has such a strong rugby community and I look forward to adding to the incredible sporting success. They boys have been so welcoming and it’s clear that we are building something special here.”

Pradere has spent majority of the preseason serving as a practice player for the Free Jacks. Through this consistency, hard work and dedication, the 6’1”, 200lb center has elevated himself out of the practice squad roster and into a playing roster spot for the 2021 season.

Coming to New England from Rugby United New York, Pradere earned two caps with RUNY and completed eight tackles over the course of two seasons with the team. Prior to making his professional debut, Pradere’s attended McGill University in Montreal, Canada. Over the course of his collegiate career, Quentin helped lead the team to three consecutive RSEQ Titles and was named Rookie of the Year in his freshman season. Following a standout collegiate career, Pradere went on to represent the New York Athletic Club where he helped the team earn the ARP Championship in 2015.

“Quentin ‘The Puma’ Pradere will bring athleticism and pragmatism to the New England Free Jacks,” said Head Coach, Ryan Martin. “His long levers will leave defenses pondering how to defend the carry, pass, offload game of The Puma. He was an MLR regular with RUNY and has traveled north to further develop his rugby education in the Free Jacks Rugby nursery!”

With French roots, but having grown up in London, England, Pradere attended King’s College School Wimbledon where he played rugby, tennis, and soccer. Quentin holds a Bachelor’s Degree in Economics and Finance from McGill University and currently works as a operations and strategy manager at Yext.

Major League Rugby: Major League Rugby (MLR) is a professional rugby league, launched in April 2018. It is an initiative of the American rugby community, in partnership with private investors, who believe that American rugby can thrive at the highest levels—as a commercial enterprise; as an influential player on the international scene; and as a participation sport at the youth and senior level. MLR is the pinnacle of American rugby, and provides a rallying point for local communities, a focal point for American rugby fans, and an aspirational destination for young athletes. For more information please visit https://www.majorleague.rugby/