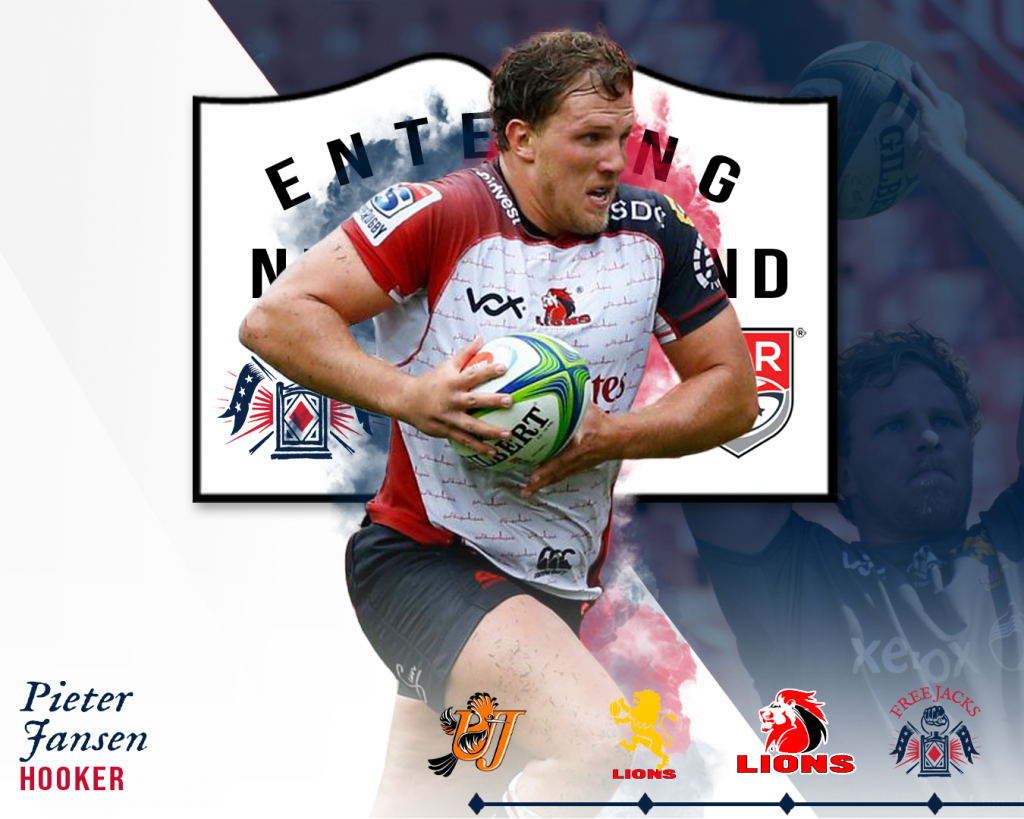 Johannesburg based Lions Hooker, Pieter Jansen, Joins the Free Jacks for the 2021 and 2022 seasons.

BOSTON – September 23, 2020 –The New England Free Jacks are pleased to announce the signing of 6’0” 230 lbs hooker Pieter Jansen on a two-year contract. A native of Springs, South Africa, Jansen arrives in Boston on the back of a successful campaign with Super Rugby’s Emirates Lions.

“I’m very grateful and excited for my journey in New England and can’t wait to join the boys and create something special for the club and fans,” said the 25-year-old.

In 2019, Jansen’s first season with the Lions, the exciting hooker made four appearances off the bench as a replacement for his friend and mentor, Springbok star Malcom Marx. “Malcolm has made such a big impact on world rugby,” Jansen explained in the leadup to the 2020 campaign, “having him guide me over the last few seasons has been immense.”

In 2020, with Marx on a year-long sabbatical from his Super Rugby commitments, Jansen made the most of his opportunity to secure the Lions no. 2 jersey, making his first Emirates Lions start against the Jaguares in the opening match of the 2020 Super Rugby Season. Nicknamed “Piet Piston” by his Lions teammates, Jansen went on to feature in every game for the Lions prior to Super Rugby’s premature cancellation, earning a total of five starts for the storied franchise.

“Pieter is a hard working and accurate forward who loves to open the legs up in the width,” said Free Jacks head coach, Ryan Martin. “He is well travelled having experienced top level rugby in New Zealand, Australia and South Africa and off the field is a true gentleman.”

Before his call-up to Super Rugby, Jansen was a consistent selection for the Xerox Golden Lions in the Currie Cup, South Africa’s premier domestic competition. After signing with the Golden Lions upon his graduation from Hoërskool Dr. E.G. Jansen in 2015, Jansen went on to earn a total of 20 appearances – and 14 starts – for the Province between 2016 and 2020, scoring four tries.

Free Jacks fans can expect Jansen to make an immediate impact in the 2021 MLR Season. Known for his powerful scrummaging, tenacious defense, and work rate in the loose, Jansen, a converted prop, will undoubtedly make his presence known across the pitch.

Join Pieter and the Free Jacks for a virtual Town Hall “News and Brews,” on October 15. Grab a Free Jacks IPA and join the virtual gathering and get to know the newest Free Jacks and the returning players. RSVP using the link here: https://freejacks.com/news-and-brews/.