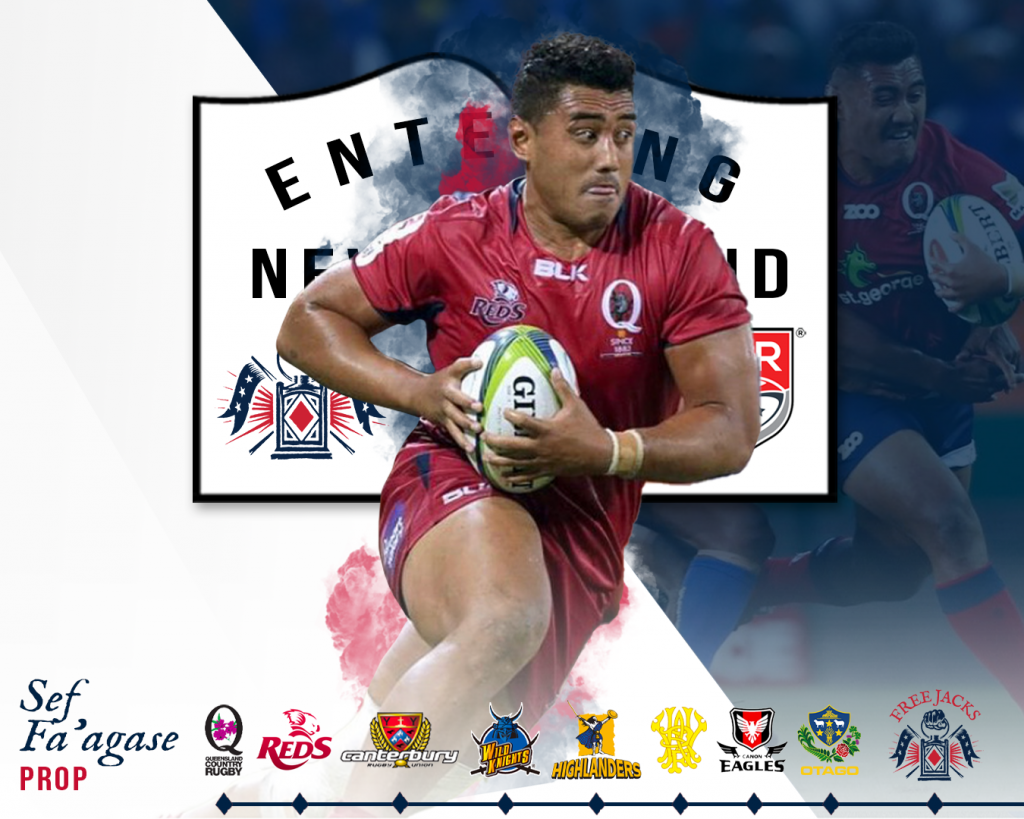 BOSTON – December 17, 2020 – The New England Free Jacks are excited to announce the signing of Sef Fa’agase for the 2021 and 2022 seasons. The 6’1, 255-lb prop has enjoyed a storied career to date, amassing 49 Super Rugby appearances, 21 Mitre 10 Cup appearances and a dozen Top League appearances since 2014. During this time, Fa’agase has earned selections for the Barbarians, Wallabies XV and Wallabies wider squad, experiences that will position the 29-year-old well to stamp his mark on Major League Rugby.

“I’m really looking forward to getting over to New England and getting stuck in with the Free Jacks,” commented Fa’agase. “I’ve heard a lot of good things about the region, the people and the culture so I am really excited to get immersed in that. I can’t wait to see where we can go as a team in the 2021 MLR season.”

Fa’agase was born in Auckland, New Zealand before moving to Australia as a child with his family. Having only begun playing the game in 2011 at 20 years of age, Fa’agase’s journey to professional rugby was an unconventional one. By 2012, Fa’agase was selected for the Australian Rugby Union National academy, before representing the Queensland Reds A side in the 2013 and 2014 Pacific Nations Cup tournaments. 2014 proved a breakout year with Fa’agase playing key roles in the Brisbane club premiership winning University of Queensland side and the National Rugby Championship (NRC) winning Brisbane City side.

Fa’agase would sign for the Queensland Reds in 2014 where he would stay for 3 seasons, earning 46 caps between 2014 and 2018 after making his debut against the Brumbies in Canberra. During that time he would play a further 22 games for the adjunct NRC side, Queensland Country. In only his seventh year playing the game, Sef pulled on the green and gold for the Wallabies XV side in 2016 and was selected for the Wallabies wider-training squad for the 2017 Rugby Championship as well as the Barbarians side to play the Wallabies that same year.

After three seasons with the Queensland Reds, Fa’agase returned to his country of birth to further his game. Sef initially signed with Canterbury in the Mitre 10 Cup where he impressed and was contracted by the Panasonic Wildknights in the Japanese Top League for the 2018/19 season. Sef would return to play for the Highlanders in 2019 where he made 3 further super rugby appearances at the back end of the season. In a whirlwind few years, Sef would play for Wellington in the 2019 Mitre 10 Cup, Canon in the Japanese Top League (2019/2020) season, and most recently Otago in the 2020 Mitre 10 Cup.

“Sef is a rare commodity in the game with the ability to play both sides of the scrum equally well,” said Free Jacks Head Coach, Ryan Martin. “Sef has played professionally in both Australia and New Zealand, so comes with great experience at the top level of the game. Sef never shies away from big contact, so look for some devastating carries and big hits on defense from Mr. Versatility in 2021.”