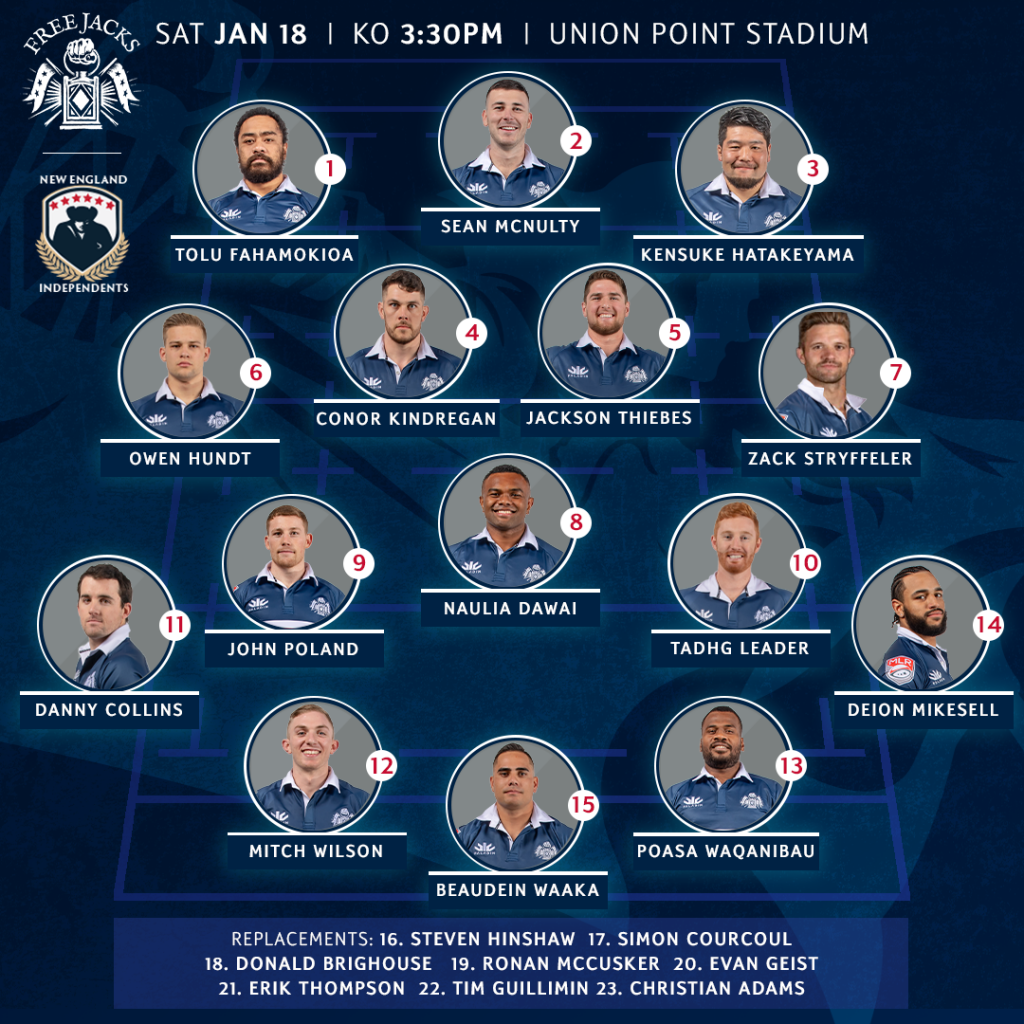 Head Coach Josh Smith has announced his first roster in the New England Free Jacks’ Inaugural Season for the team’s pre-season match against the New England Independents, a select squad of All-Star talent representing players from eight clubs around the area.

Kensuke Hatakeyama and Tolu Fahamokioa will start at prop in this first of a two match series kicking off at 3:30pm on Saturday, January 18. Both props will look to showcase their experience at scrum-time and dynamic athleticism across the park in their first performances in New England. Sean McNulty, US-Irish hooker, joins the pair in the front row.

Workhorses, Conor Kindregan and Jackson Thiebes, start at Lock for the Free Jacks, both having played dominant matches for the New England team in the 2019 exhibition season. An exciting back-row completes the pack and is composed of youngest member of the team, Owen Hundt, MLR veteran, Zack Stryffeler, and dynamic international Fijian flanker, Naulia Dawai.

John Poland gets hit first opportunity to direct the fixture in the number 9 jersey, pairing with Tadhg Leader at Fly-half. Mitch Wilson and Poasa Waqanibau will combined for a balance of electric speed, physicality, and flair to the midfield. The back three will see Boston native, Danny Collins, emerging USA international Deion Mikesell and former New Zealand All Blacks 7s pivot, Beaudein Waaka, combine for what is expected to be an energetic display.

The match is set to be played at the Free Jacks home, Union Point Sports Complex, on the world class field outside should weather permit. Fans of the New England Free Jacks have shown their excitement for the Inaugural Season of the first professional rugby team in New England and an overwhelming number of attendees have indicated interest in attending this weekend’s free match. As a result, the match is set to be played on the outdoor home pitch to allow as many fans as feasible the ability to see the first display from the team set to take on Major League Rugby in less than 3-weeks time. In the event that the weather is deemed unplayable by match officials, the match will be played inside the all-weather bubble with limited viewing capacity. Changes will be communicated to all members via the team’s website and social media channels leading up to the match.

The full match day 23 of the Free Jacks and New England Independents can be found below.