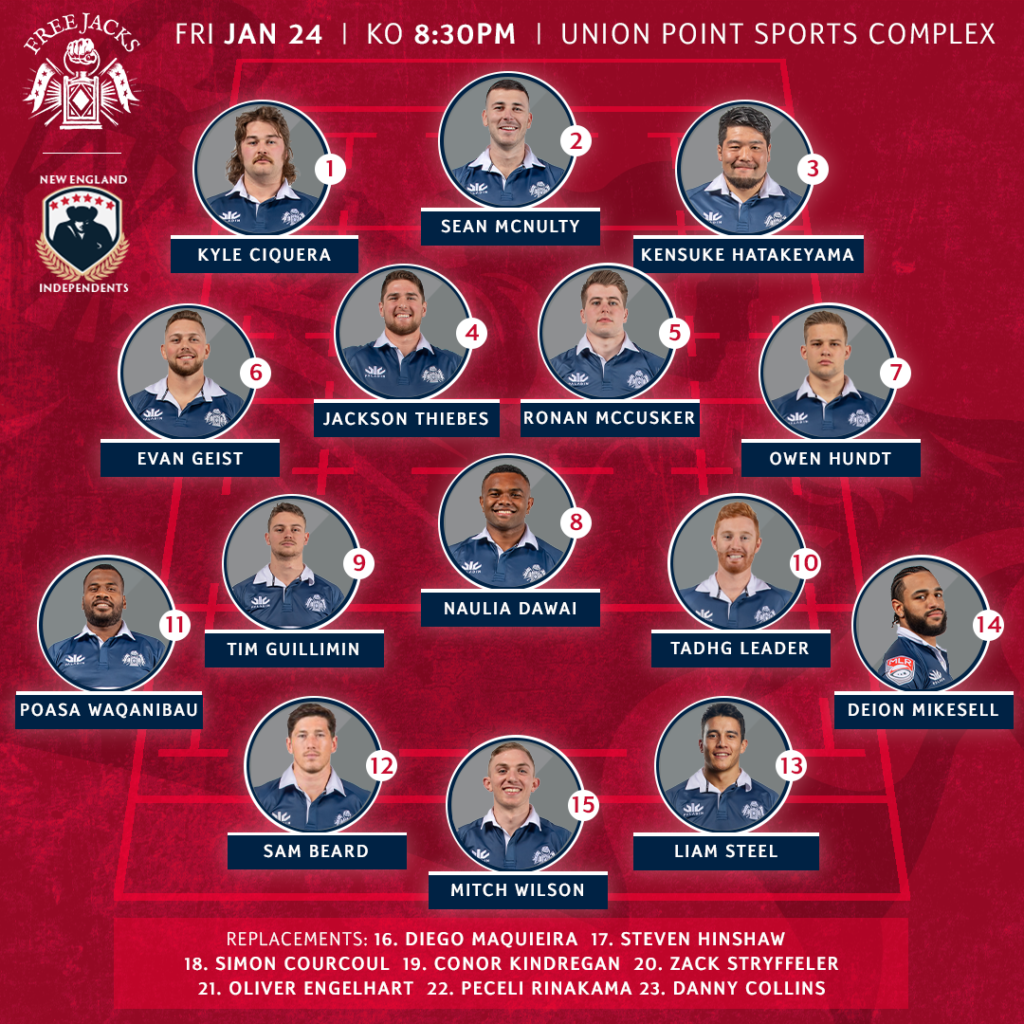 The Free Jacks have announced their 23-player roster for the team’s 2nd pre-season match against the New England Independents, a select squad of All-Star talent representing players from clubs in the region.

Last week’s fixture between these two sides saw the Free Jacks come up against a fierce and motivated Independents team that was committed to the contact, attacked the gain-line, and forced numerous turnovers in the bitter New England winter chill.

The 2nd match in the series takes place this Friday, January 24th, with kickoff scheduled for 8:30 pm at Union Point Sports Complex. The event is AT CAPACITY and attendance is strictly limited to confirmed RSVPs.

A notable inclusion in the Free Jacks starting roster this week is loose-head forward, Kyle Ciquera, who represented the Independents in the first match. “Kyle has shown great development training with the Free Jacks throughout pre-season, and his game last week showed his ability on the field,” said Head Coach Josh Smith. “This is a fantastic opportunity to push Kyle’s ability and see how he performs with the Free Jacks. The Independents side functioned just how we had hoped and identified Kyle and other players we hope to see become Free Jacks in the future.”

Japan International Kensuke Hatakeyama and Sean McNulty join Kyle in the front row. Both demonstrated their scrummaging prowess and athleticism around the park in the first test of the series. Jackson Theibes and Ronan McCusker will provide the power of the pack from the 2nd row. Coach Smith has made one change to his back-row, including Evan Geist along side Owen Hundt and Naulia Dawai in a powerful loose forward combination.

French playmaker, Timothee Guillimin, receives the starting scrumhalf position and will pair with US Eagle Tadhg Leader at Fly-half. A new center combination of New Zealand born, Canterbury and Pro 14 veteran, Sam Beard, and Mitre 10 Cup utility back, Liam Steel, meet up in the midfield to control the game of play with their experience. Poasa Waqanibau, who was dangerous last weekend, moves to the wing with Deion Mikesell. Man of the Match, Mitch Wilson, finds his way to the no. 15 jersey and will look to ignite the team once more with pace and footwork.

The full match day 23 of the Free Jacks and New England Independents can be found below.