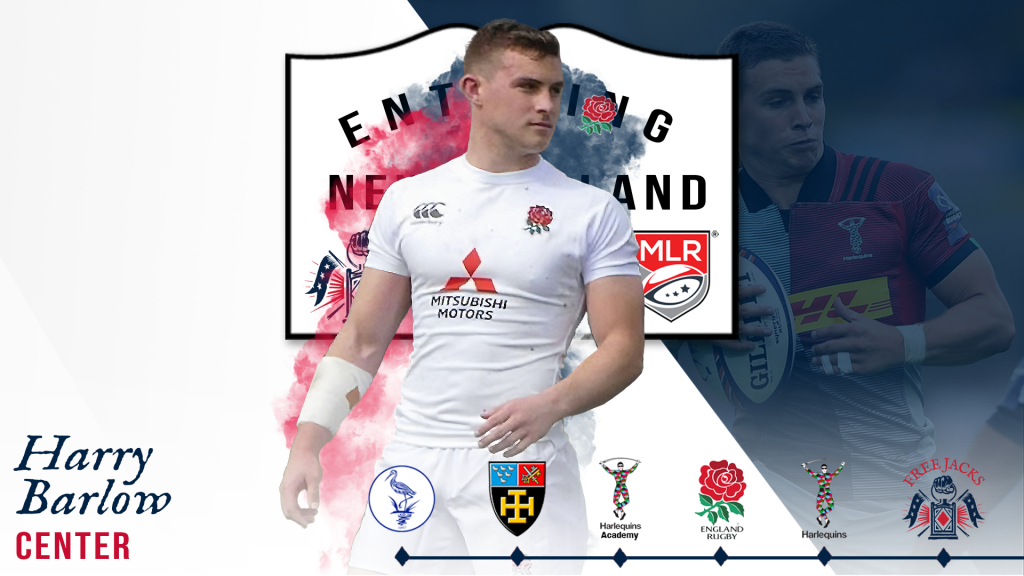 BOSTON — August 11 2020 — Free Jacks have added young and physical Harry Barlow to the playing roster for the 2021 and 2022 seasons in Major League Rugby. US-eligible Barlow will join New England from English Premiership side Harlequins. Barlow represented England at the U16, U17, U18 and U19 levels, having competed in the 2018 U18 Six Nations Championship and with the youth 7s squad at the 2017 Junior Commonwealth Games.

“I’m honored to have the opportunity to play with the Free Jacks and join MLR at a really exciting time,” commented Barlow. “I’ve been following the team since the inaugural season and seen the exciting brand of rugby they play and the drive that the whole organization has on and off the field. I’m proud of my American roots with family in the States, and I’m buzzing to have the chance to play rugby in such an exciting league. I’m already counting down the days to jump over to Boston, and I’m looking forward to linking up with the team to create new memories and build on the Free Jacks’ successes to date.”

The 5’10” 200lbs Barlow was born and raised in Guildford just outside of London. Early in his rugby career Barlow earned the opportunity to represent England as part of the U16, U17, U18 and U19 teams. Comfortable at center and on the wing, Barlow earned his first cap for England at the U16 level, vice-captaining the squad in the 2016 matchup against Wales. Barlow went on to earn eight caps and has scored two tries with the England age-grade sides. He also appeared for England at the Junior Commonwealth Games in the Bahamas in 2017 with the youth 7s squad, scoring five tries in the tournament and helping lead the team to a 2nd place finish, falling to Samoa in the final.

Barlow was a key member of the English Premiership’s Harlequins’ Academy from the age of 13. His nifty footwork and speed, combined with a high rugby intellect and handy skill set, have made Barlow a standout player at every level of his game. At 18 Barlow earned his first contract with the Harlequins senior squad. Barlow was also a part of the 2019 Quins 7s side that won the London Floodlit 7s and featured for the Harlequins at the Premiership 7s in 2018 and 2019.

“I always look forward to the opportunity to learn from experienced players and coaches,” added Barlow. “At Quins, at the Free Jacks, from coaches and players, my overall goal is to be as enthusiastic as I can and learn from those around me, bringing 100 percent intensity and using my speed and footwork where I can.”

“Harry ‘The Gentleman’ Barlow comes to the Free Jacks loving to score a try,” noted Free Jacks Head Coach, Ryan Martin. “Harry brings exactly the attitude I love in my outside backs, dynamic, hard-working, eager to learn and fiercely driven. Harry is a top young man and an exciting player with a bright future ahead. His ability to deceptively change pace and direction lends itself to many a line break. His effective spot tackling and defensive line speed will pressure teams across the league in the midfield.”

A product of Cranleigh Rugby Club from the age of 11, Barlow began his youth career across positions in the back line. At 14, Barlow settled into his roles at center and wing and on occasion stepped into no. 8. Barlow graduated from Cranleigh Prep School in 2018, where he was involved in the Rosslyn Park national winning 7s squads in 2016 and 2017. He was also vice-captain of Cranleigh’s 2018 unbeaten season.

Join Harry and the Free Jacks for a virtual meet and greet, “News and Brews,” on Thursday, August 13th. Grab a Free Jacks IPA and join the virtual gathering and get to know the newest Free Jacks and the returning players. RSVP using the link here: https://freejacks.com/news-and-brews/.