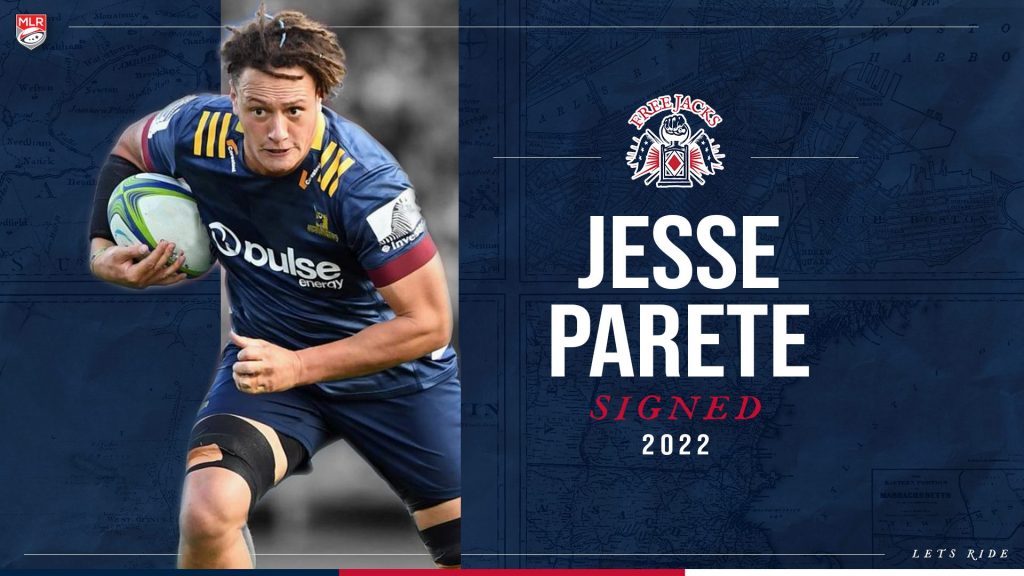 “Kia Ora Free Jacks whanau,” Parete commented to his new Free Jacks family.’ “I’m looking forward to getting over to Boston and experiencing life in the USA. Can’t wait to get into some mahi (work) with the boys and getting to know everyone from the boys in the team to all the staff behind the scenes that get us on the paddock each weekend!”

A commanding presence across the rugby field, Parete made his Super Rugby debut for the Chiefs in 2018. Parete went on to represent the Hamilton based side 24 times across the 2018 and 2019 seasons before joining the Highlanders in 2020, impressing with his versatility, playing both second and back row with his dynamic front foot attacking style.

Originally from Hawera, New Zealand, Parete began his rugby career at the age of 16 with the Melbourne Storm, competing in Australia’s National Rugby League. In 2014 Parete returned home to represent Taranaki in New Zealand’s NPC competition. His rugby career accelerated after two outstanding seasons with Bay of Plenty in 2016 and 2017, in which he scored 4 tries and 6 tries respectively. His performances in the National Provincial Championship earned him a Super Rugby Contract with the Waikato Chiefs the following Super Rugby season.

“I’m really excited about Jesse joining the Free Jacks,” emphasized Free Jacks Assistant Coach Mike Rogers. “Jesse is a physical and uncompromising player, he brings a lot of intensity and energy to our pack, not to mention a lot of high level experience having played Super Rugby in NZ for the Chiefs and Highlanders as well as Top League in Japan for Canon.  Off the field Jesse is a relaxed person who is passionate about the communities that he represents which will be a great fit for the Free Jacks.”

Jesse will join a robust group of New England loose forwards, and his impressive on-field performance in Super Rugby and Top League competition will make him an immediate and demonstrable force in the high-flying Major League Rugby season ahead.