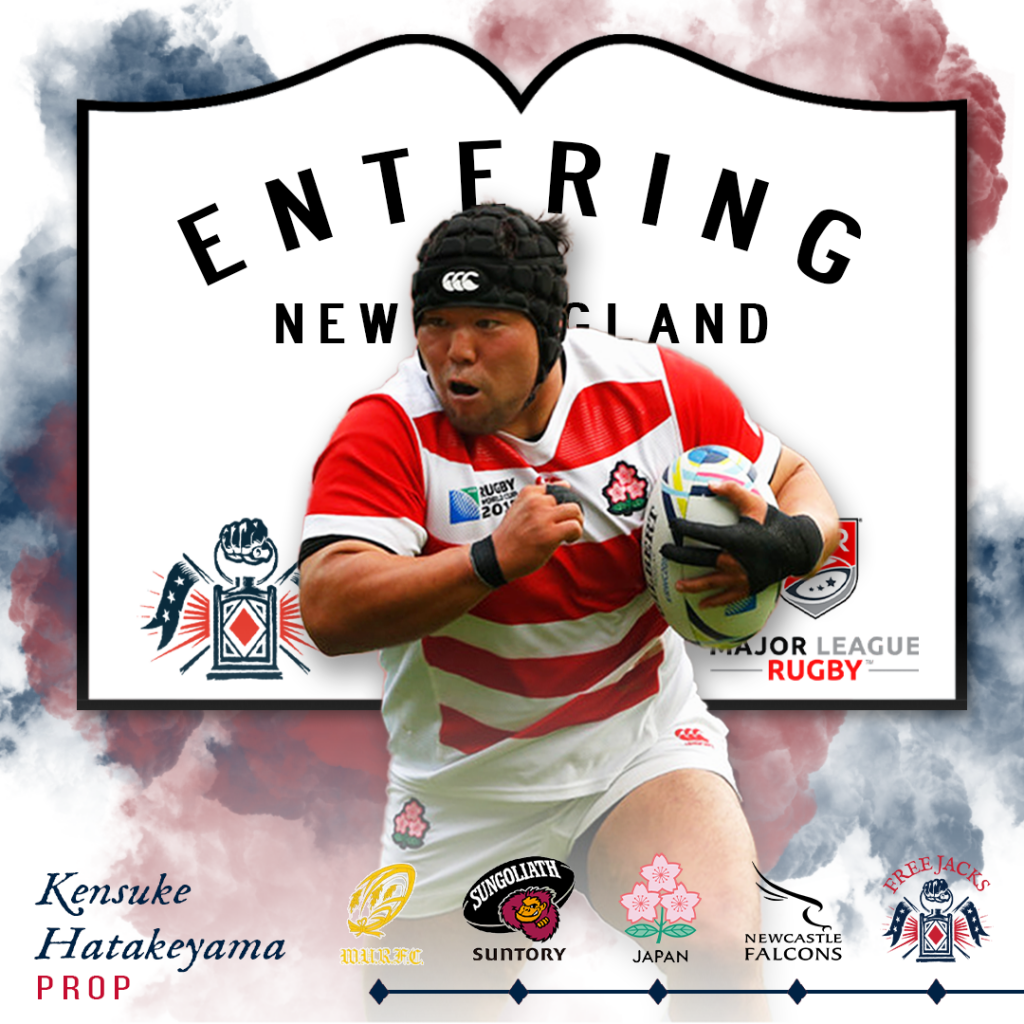 “I am grateful and honored to join the Free Jacks in MLR. I hope to make a big impact representing myself and Japanese rugby and see this opportunity as a pioneering chance to build the profile of rugby in Japan and the United States,” Kensuke said of his move.

Kensuke (畠山健介, Kenny) brings a wealth of international experience to New England and Major League Rugby, having run out for the Brave Blossoms in 78 matches between 2008 and 2016, and is the 4th most capped Japanese international of all time.

Kenny was a member of both the 2011 and 2015 Japanese Rugby World Cup squads and played an integral role in the Japanese team that rocked the rugby and sporting world at the 2015 Rugby World Cup when, in an upset, Japan defeated two-time Cup winners South Africa, 34–32, laying the groundwork for a story book quarter-final appearance in the 2019 Rugby World Cup.

He is currently representing the city of Tokyo at the Rugby World Cup as a Special Supporter at this year’s Tournament and is an active commentator and ambassador for the sport in Japan.

“This is an incredible opportunity for us and Kensuke,” said Free Jacks head coach Josh Smith. “Kenny is a very talented player, a strong scrummager, and enthusiastic leader. It is amazing to be able to bring in a player with the level of experience and quality that Kensuke has, and we are thrilled to welcome him to New England where we are building the professional game.”

Kenny joins the Free Jacks from Japan Top League club Suntory Sungoliath where he made 163 appearances and played alongside greats of the game including Schalk Burger (South Africa), George Gregan (Australia) and George Smith (Australia). Kenny helped lead the Tokyo based side to five All Japan Championship titles and four Top League Championships during his 11-year career at the club.

The 34-year-old hails from Kesennuma in Myagi prefecture and has earned the nickname “Flying Yokozuna” (or “Flying Prop”) for his dynamic and exciting style of play. While continuing his playing career, Kenny has also looked to build the game of rugby in Japan. In 2017 he was appointed a Representative Director of the Japanese Rugby Football Association to support rugby players and athletes across Japan. His leadership and love of rugby will continue to be applied to growing the game in the community here in New England.

Before launching his professional career, Kenny was a standout player for Waseda University in Tokyo, contributing heavily to the teams National University Championships. In High School Kenny represented Sendai Ikuei High School in both Rugby and Basketball and his performance at the age grade rugby level led to his selection to the High School National team and Japanese U17 National team.

Kenny will be joining the Free Jacks at the commencement of pre-season training this December and we are looking forward to welcoming Kenny into the New England community.