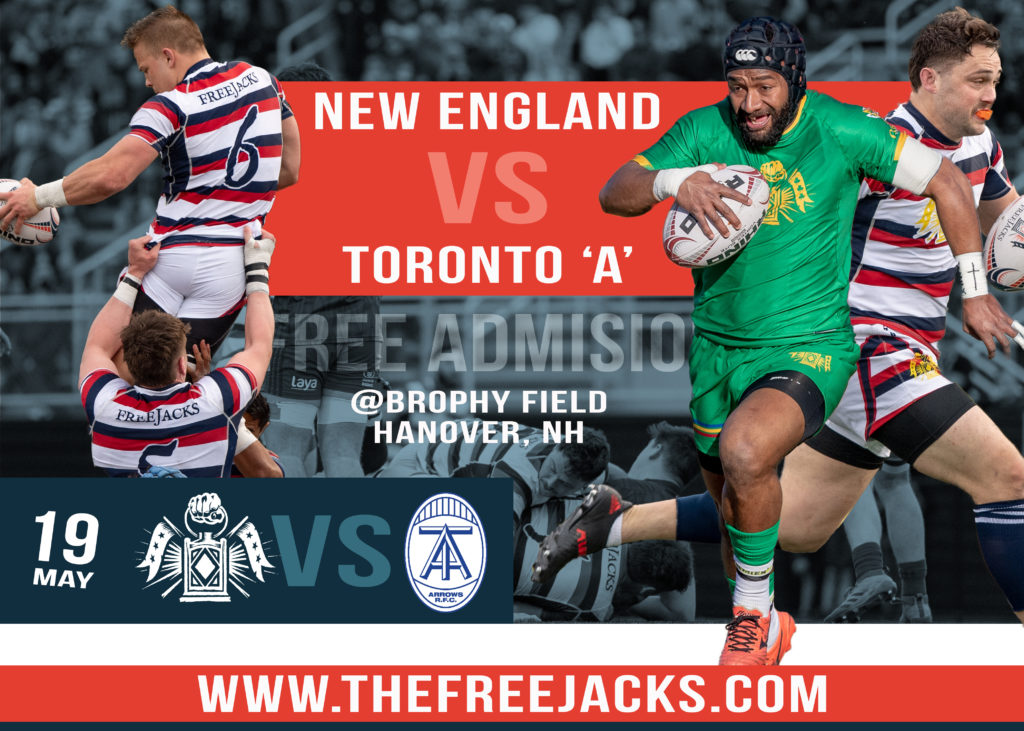 Boston, MA – The New England Free Jacks are set to host the ‘A’ team of Major League Rugby (MLR) powerhouse, Toronto Arrows, on Sunday May 19th in Hanover, NH, at Brophy Field at Dartmouth’s Corey Ford Rugby Clubhouse. The Free Jacks have opened the doors for this exhibition match providing free admissions for all those that attend this historic fixture.

“This game in the Upper Valley of New Hampshire is not only a middle point between Toronto and Boston, but also a perfect opportunity to attract fans from around New England to the highest level of rugby in the Country,” commented Free Jacks Operations Director, Owen Scannell. “There is a large rugby community throughout New Hampshire and Vermont, and we hope to see all the clubs down at Brophy field to support their New England Free Jacks as we host a wonderful day of rugby!”

We are now mid-way through the New England Free Jacks’ 2019 exhibition season. The New England team hosted the Cara Cup, a celebration of friendship and rugby between the four ‘A’ teams of the Irish Provinces. Connacht, Ulster, Munster and Leinster each ventured to the Boston area to face the Free Jacks and each other. The festivals were a massive success with crowds from around New England coming out to show support for their newly mined local professional team.

“Coming off the Cara Cup we are now looking to test ourselves against MLR ready sides and continue to build as we look towards 2020,” noted Head Coach Josh Smith. “The players fought hard in each game so far, and facing the Irish sides was a great learning experience for everyone involved. One thing we can say for sure is that the energy, drive, and eagerness to continue to learn is there and we are excited to turn that momentum towards these next 3 spring games.”

The game at Dartmouth, will also be a homecoming for three players on the New England Free Jacks. Steven Hinshaw and Ollie Engelhart co-captained the Dartmouth Rugby Football Club just last year, and the scintillating winger Stephen Dazzo began his rugby career his senior year at Dartmouth on the same field. The venue is sure to be welcoming both to them and as well as every player and spectator at the game!

# # #
New England Free Jacks
Rugby Club New England, aka the Free Jacks, is greater Boston’s 1st Professional Rugby team representing all the greatness of the six New England states on and off the field. The Free Jacks were named the 9th member of Major League Rugby on September 20th and will compete in the 2020 MLR regular season.
For more information on the Free Jacks:
Oliver Engelhart
917-890-7545
Oliver.engelhart@thefreejacks.com
www.freejacks.com

Major League Rugby
Major League Rugby (MLR) is a professional rugby league, launched in April 2018. It is an initiative of the American rugby community, in partnership with private investors, who believe that American rugby can thrive at the highest levels—as a commercial enterprise; as an influential player on the international scene; and as a participation sport at the youth and senior level. MLR is the pinnacle of American rugby, and provides a rallying point for local communities, a focal point for American rugby fans, and an aspirational destination for young athletes.
For more information on Major League Rugby:
Hampton Pelton
801.99.8130
info@usmlr.com
https://www.majorleague.rugby