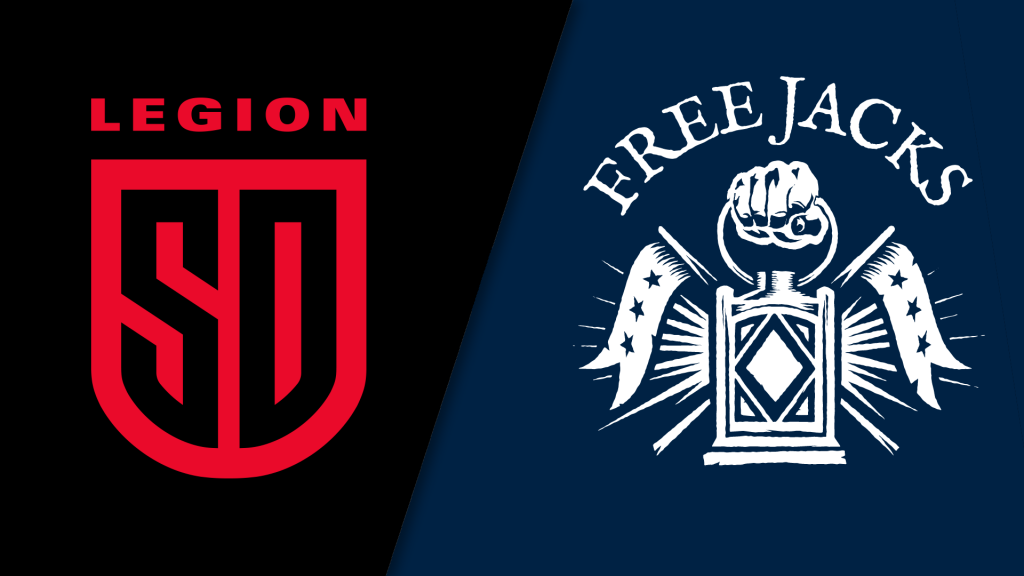 The Free Jacks were unable to find a way to win on Sunday night, falling to the San Diego Legion at Torero Stadium 30-21 after gaining momentum throughout the match.

Within the first 4 minutes of game play, New England gave up three penalties, each time resulting in a turnover. Eventually, the multiple infringements allowed the Legion’s Kyle Burton to secure the first three points of the match by way of a penalty conversion.

From there, the Free Jacks committed further turnovers, affording San Diego more opportunities at gaining territory. While the Free Jacks’ defense showed plenty of muscle and grit as they frustrated the Legion’s attack, it wouldn’t be enough to prevent an eventual 15-point deficit at the 18-minute mark after tries by the Legion’s Save Totovosau and Tira Patterson.

After the first twenty minutes of play, the Free Jacks began to move the ball more fluidly. The next few series would feature a well-timed short lineout by Sean McNulty (Hooker), as well as Danny Collins (Right Wing) displaying great footwork when up against former New Zealand All-Black and World Cup champion Ma’a Nonu, in what was an overall great night for the team’s local player.

Before the half the Free Jacks were provided a late opportunity to close the gap on the scoresheet. An infringement by the Legion would afford the Free Jacks a chance at a clean platform from the lineout, from which they had the best chance to utilize the team’s young, talented back line.

A string of passes from Sam Beard and Deion Mikesell put the ball in the hands of Boston local Danny Collins who threw a miracle offload as he was tackled into touch. Fullback Mitch Wilson collected and delivered a similarly magical pass to 8-Man Naulia Dawai, who in turn would find the tight-window offload to Posa Waqanibau. The team effort led to Waqanibau diving over the try line beneath the posts for a crucial five points. The subsequent conversion by Tim Guillimin would be successful, bringing New England back into the game at 15-7.

Just before the halftime whistle, San Diego maintained possession with a conservative attack, with Scrumhalf Deveraux Ferris hitting most of his primary options out of the breakdown. While the Free Jacks defense stood strong in an attempt to prevent easy meters to the Legion, it wasn’t enough to stop the eventual try by Dylan Audsley after several San Diego phases from the one meter. As time expired, both teams headed into the locker room at halftime with a score of 20-7.

The 2nd half saw the Free Jacks mount an impressive campaign to regain momentum and swing the match in their favor. The Free Jacks scored the first points of the half, thanks to some quick thinking and reaction from Scrumhalf John Poland off a penalty deep in the Legion 22. Poland caught the defense out of position with a quick-tap at the official’s mark, finding some open space to the outside before busting through two tackle attempts in order to put the ball to ground. Guillimin hit his second conversion of the night to bring the score to 20-14.

As San Diego looked to put more points on the board, The Free Jacks defense took measures to show their grit and remain firm. One highlight play featured former Life University standout Mitch Wilson sprinting across the field to prevent the Legion’s Tira Patterson from scoring his second try of the night, knocking him into touch before the ball was touched down in-goal. The tackle allowed the Free Jacks to take the lineout, clearing the ball out of their red zone without the Legion securing any points.

After sending the kickoff back to the now surging Free Jacks squad, the Legion were able to make a high point steal, which very quickly turned into a Deveraux Ferris-charge into the In-goal for the Legion’s final try of the night, reestablishing their lead at 27-21.

Despite a hurried and spirited comeback attempt by the Free Jacks, a penalty at the scrum and gave San Diego’s Luke Burton the opportunity to successfully kick for points, putting the game out of reach as 80 minutes approached. The match would come to an end with a final score of 30-21.

San Diego’s Pslam Wooching was named the contest’s Man of the Match.