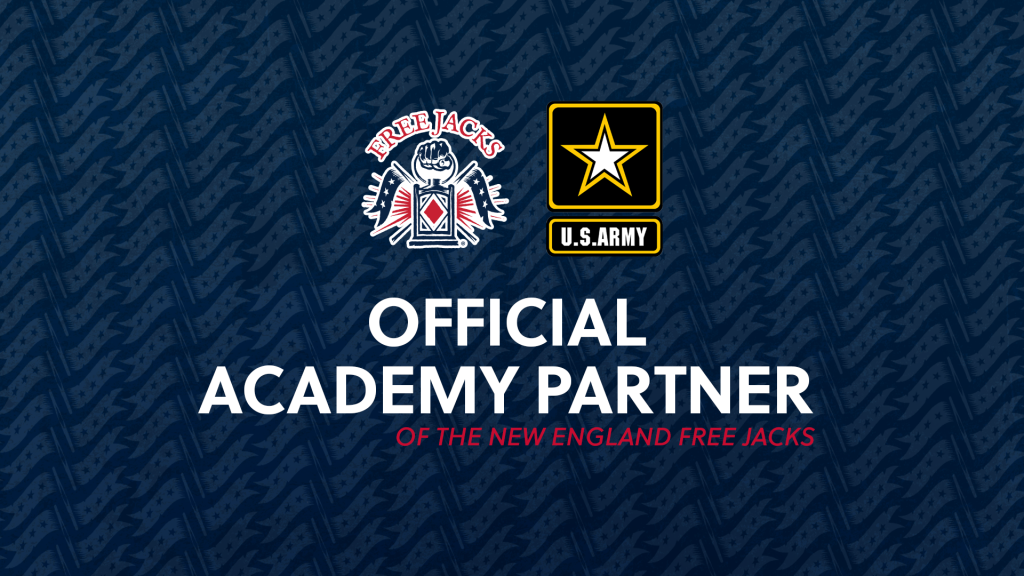 BOSTON—March 11, 2021— The New England Free Jacks and the U.S. Army today announced a renewed partnership to increase community and youth access to rugby across New England. The collaborative partnership aims to grow the development of rugby in the region and expand community outreach and youth development programs through the Free Jacks Academy and Regional Training Groups.

The Free Jacks and U.S. Army will work together to design and implement the “U.S. Army Challenge.” The Challenge is set to be integrated into each Free Jacks Regional Training Group as part of the Free Jacks Academy benchmarks to develop participants’ on field technical development. Free Jacks Head Coach, Ryan Martin, Assistant Coach, James Willocks, and U.S. Army Captain, Charlton Cornell, will work closely to develop the program. In the coming weeks. Developing players can expect a focus on the application of the physical and athletic stimulus of the game of rugby in a fun and competitive environment while working towards determined targets.

“Working with the U.S. Army brings our shared values of courage, integrity, respect, service and teamwork to the forefront of rugby’s development in New England,” commented Free Jacks Co-Founder and CEO, Alex Magleby. “The Free Jacks Academy, and the thirteen Regional Training Groups within, were set up to localize learn-to-play and high-performance rugby opportunities for aspiring players in the region. By collaborating with the U.S. Army, we can build on the great work done to-date by developing a fun and competitive model to drive athletes across New England towards clear goals. It’s exciting to have the U.S. Army onboard to support rugby, community, and youth development.”

The Free Jacks Academy includes 13 Regional Training Groups (RTGs) to better connect athletes and coaches at the local level through a series of tracking days, clinics, 365 virtual skill and fitness programming, and identification opportunities to play into the Junior Jacks Academy squads or the Independents Senior Development squads. As an officially recognized USA Rugby National Development Program (NDP), the Free Jacks Academy is established to offer regular and ongoing development opportunities for players aged 12 to 25 with key performance indicators in mind for selection at the national level.

“This partnership with the Free Jacks allows the U.S. Army the opportunity to leverage our shared vision and values system in maximizing people’s potential,” says South Shore Company Commander Captain Charlton Cornell.  “Army Soldiers pride themselves on peak physical fitness and there are so many opportunities available in the Army like the All-Army Rugby Team.  We look forward to engaging with the community about all the Army has to offer.”

Established in 2020, the Free Jacks Academy has worked with over 2,000 youth, high school and club players ranging from first-time rugby players, varsity programs and university teams, and men’s and women’s adult players. In November of 2020 the Free Jacks announced a preliminary group of 85 players at Under-16 and Under-18 levels to participate in Junior Jacks performance sessions following a series of highly successful Tracking Days, connecting the 13 Regional Training Groups throughout New England.

The Free Jacks begin their 2021 Major League Rugby campaign on March 20th in Los Angeles. The New England-based professional rugby team will play its home opener at Union Point Stadium in Weymouth, Mass., on April 3rd against the Utah Warriors where fans will be able to put themselves to the test by trying out the U.S. Army Challenge in person.

About U.S. Army: The U.S. Army offers more than 150 careers with benefits for both full-time and part-time service. For more information on the opportunities available, contact the nearest Army recruiting station or visit goarmy.com/newengland. The Army is hosting a virtual career fair on March 18. Register for the fair to learn more at https://bit.ly/3sLBzIf

Major League Rugby:  Major League Rugby (MLR) is a professional rugby league, launched in April 2018. It is an initiative of the American rugby community, in partnership with private investors, who believe that American rugby can thrive at the highest levels—as a commercial enterprise; as an influential player on the international scene; and as a participation sport at the youth and senior level. MLR is the pinnacle of American rugby, and provides a rallying point for local communities, a focal point for American rugby fans, and an aspirational destination for young athletes. For more information, please visit https://www.majorleague.rugby/.