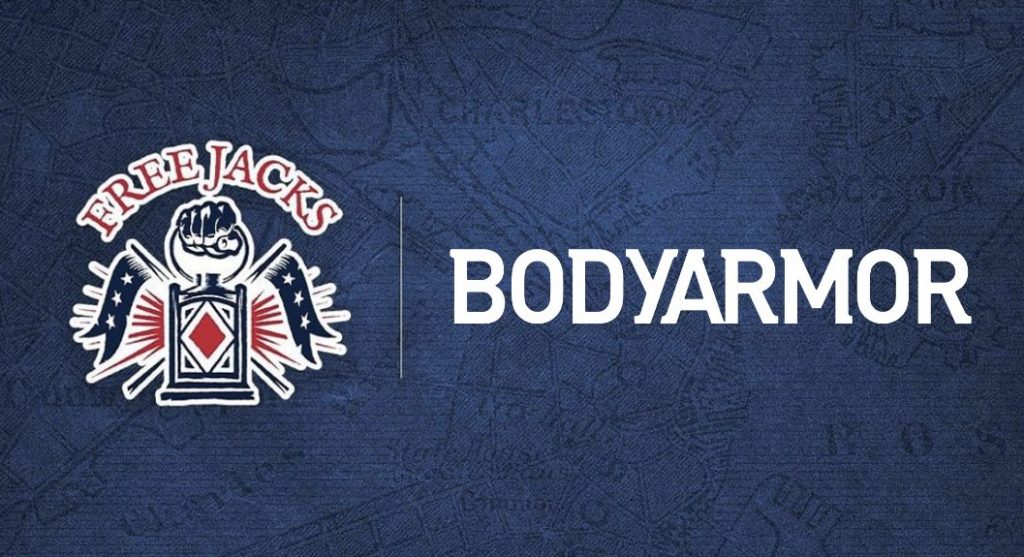 QUINCY, MA – The New England Free Jacks are thrilled to announce BODYARMOR as the team’s Official Hydration Partner for the 2022 season.

As part of the agreement, BODYARMOR will have a significant presence at each Free Jacks match with branded coolers, water bottles, and towels lining each sideline. In addition, BODYARMOR will be featured on the Free Jacks field board signage and incorporated into the team’s social media channels.

“We’re excited to become members of Team BODYARMOR” said Free Jacks Director of Corporate Partnership, Tim Torigian. “Their Sports Drink, Sportwater, and their caffeinated line of Sports Drinks BODYARMOR Edge, keep our players and coaches performing at the highest level on and off the pitch.”

BODYARMOR Sports Drink is a premium sports drink hydrating athletes through potassium and coconut water. Through the use of coconut water, they are able to deliver 2.5x the electrolytes per ounce compared with other sports drinks.

BODYARMOR Lyte has the same makeup as BODYARMOR Sports Drink but takes out the cane sugar and replaces it with a Stevia Erythritol combo that makes it the only low-calorie natural sports drink on the market. If you want to accomplish your dreams, it only takes “One More” rep to take you to the next level. BODYARMOR is here to help.

“The Free Jacks embody everything we look for in a partner” commented Ben Korn, Regional Marketing Manager for BODYARMOR. “They are best in class on and off the field and we can’t wait to see where this partnership can evolve.”
The New England-based professional rugby team is looking to continue its success through the rest of the season. New England hosts its next home game in Quincy, MA on April 9th against the Seattle Seawolves. The following home slate will see the Free Jacks will hosting the Utah Warriors on April 30th at Veterans Memorial Stadium.

About BODYARMOR Sports Nutrition:
BODYARMOR is a premium, sports drink that provides superior hydration. It is packed with electrolytes, coconut water and antioxidants and is low in sodium and high in potassium. Created in 2011 by Mike Repole, BODYARMOR contains natural flavors and sweeteners and no colors from artificial sources. In 2017, BODYARMOR launched BODYARMOR LYTE, which has all the same nutrients as BODYARMOR Sports Drink but has no sugar added and only 20 calories per bottle; and BODYARMOR SportWater, a premium sport water created for those with an active lifestyle with a performance pH 9+ and electrolytes for sport. In August 2018, The Coca-Cola Company purchased a minority stake in BODYARMOR, making them the second
largest shareholder behind Repole. In 2021, BODYARMOR launched BODYARMOR EDGE, which combines the Superior Hydration of BODYARMOR Sports Drink with a boost of natural caffeine to
give consumers an EDGE.

Major League Rugby: Major League Rugby (MLR) is a professional rugby league, launched in April 2018. It is an initiative of the American rugby community, in partnership with private investors, who believe that American rugby can thrive at the highest levels—as a commercial enterprise; as an influential player on the international scene; and as a participation sport at the youth and senior level. MLR is the pinnacle of American rugby, and provides a rallying point for local communities, a focal point for American rugby fans, and an aspirational destination for young athletes. For more information, please visit https://www.majorleague.rugby/.