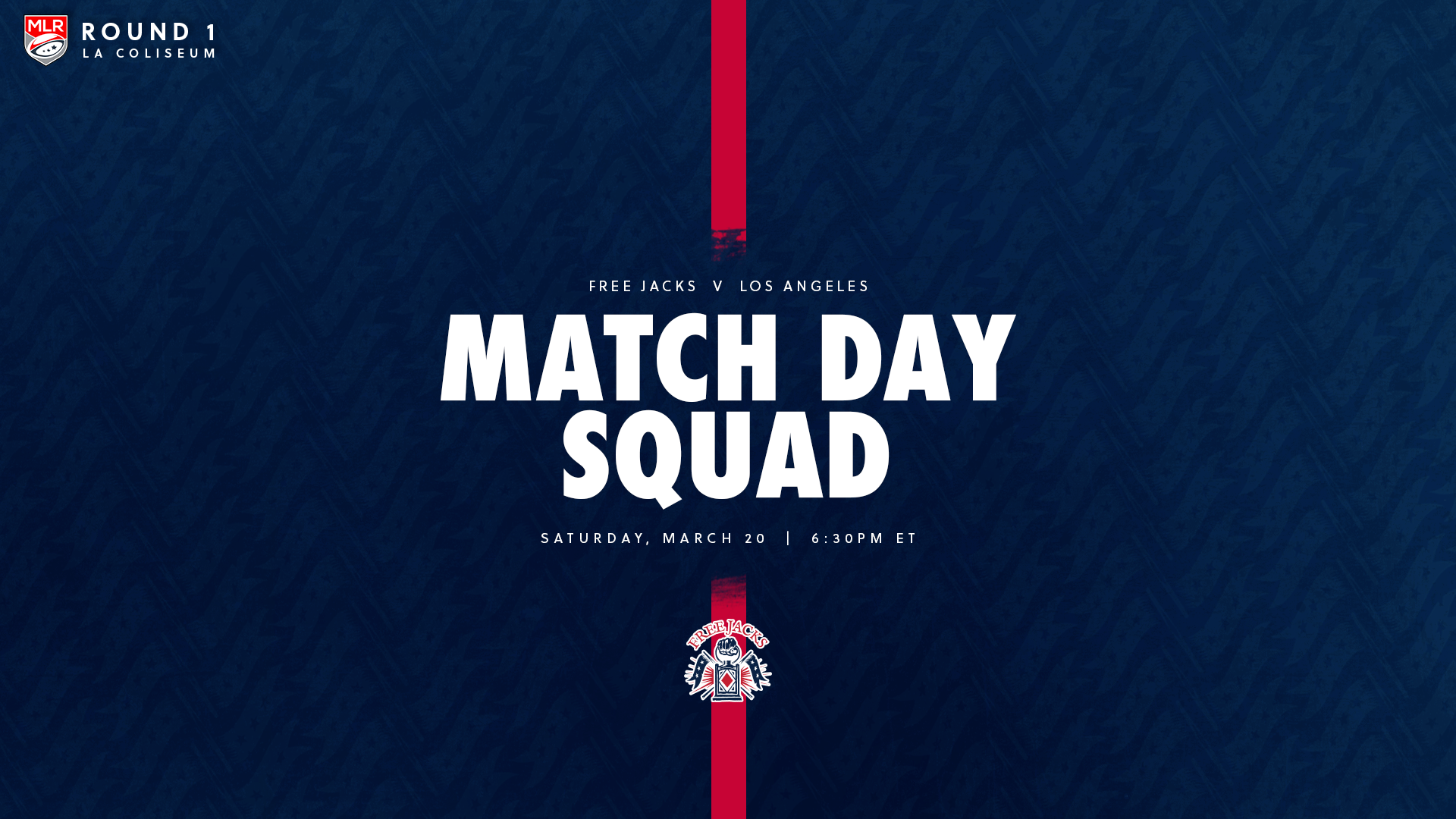 Led by Captain Josh Larsen and his Vice Captain, Beaudein Waaka, the team is looking to build on their competitive 2020 campaign. Look to see the Free Jacks showcase their attacking prowess across the park, challenging LA’s defense, while embracing the ‘nose across face’ moments to build a foundation of success based on behaviors and efforts established and expected by Coach Ryan.

Thirteen Free Jacks will make their debut this Saturday when they run out in the Red, White, and Blue of New England. The team features 14 North American eligible players paired with a highly experienced international complement of forwards and backs alike.

Sef Fa’agase and Erich De Jager combine for considerable experience in the front row, both having showcased their scrumming abilities and dynamic playing style throughout preseason, the two are ready to scrum down in the MLR. South African Super Rugby hooker, Pieter Jansen, completes the trio in the front row.

Josh Larsen and Jackson Thiebes revive their engine room partnership at lock. Their combination completes a tight-five with notable experience and power, and fans can expect these units to get through a mountain of work come Saturday.

Fan favorite, Evan Geist earns his first start in Major League Rugby at number 6, having nailed his role and earned his jersey throughout the Free Jacks preseason. He is joined by US eligible loose forward Joe Johnston who is coming off a strong Mitre 10 Cup showing for Bay of Plenty. Major League Rugby Round 1 draft pick, Justin Johnson “JJ” completes the starting 8 and will earn his first start in MLR in a new position for the young, promising forward.

New England’s backline will feature a host of talented players including Harrison Boyle at Fly-Half. The US eligible playmaker from Otago will look to set the pace of the attack against one of the league’s most exciting rosters of 2021. The general in the 9 jersey, John Poland, will join Harrison in the first-five role and look to showcase the flair and control we saw from the young Irish player in the shortened 2020 season.

The explosive combination of Aleki Morris Lome and Poasa Waqanibau in the Centers will provide a varied and electric one-two punch for both Boyle and Poland to look for to find holes with and pierce LA’s defense. Poasa’s handling and playmaking ability further makes him an exciting player to watch.

All-American and Life University standout, Mitch Wilson will explode into the new season Major League Rugby and combine with experienced Scottish International, Dougie Fife. Vice Captain Beaudein Waaka completes the back 3 with his game sense and tactical eye, and will add versatility and speed to the Free Jacks starting team.

The full 23-Man roster for Sunday can be found below: