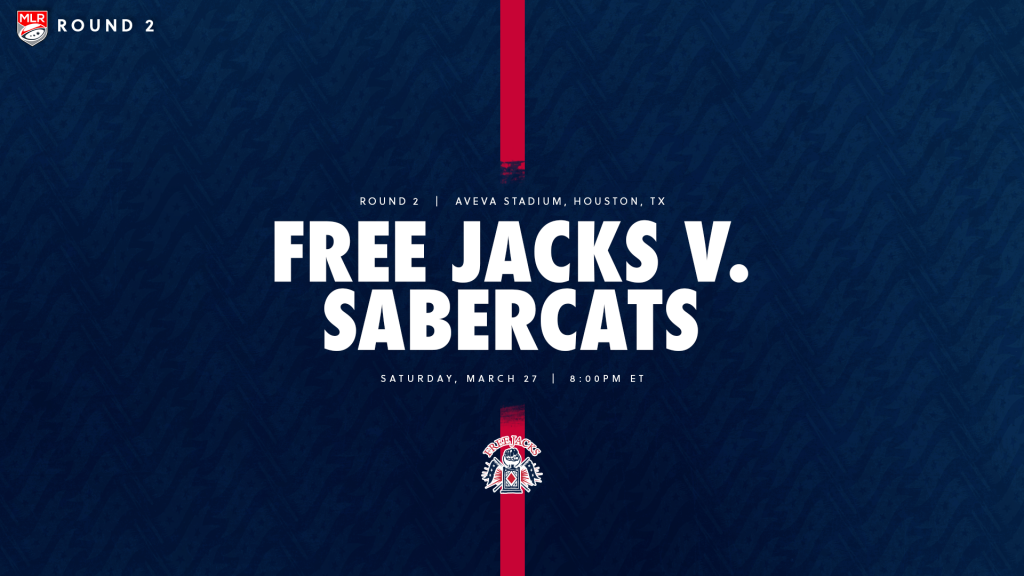 Free Jacks have named their 23-player roster to take on the Houston SaberCats in Round 2 of Major League Rugby 2021. The Free Jacks kick off at AVEVA Stadium, in Houston, TX, on Saturday, March 27, at 8:00pm ET. The match will be available to New England Fans Live on NESN, and to fans outside the New England market (including international fans) on The Rugby Network.

Head Coach, Ryan Martin, has made two changes to the starting XV. Loose forward Wian Conradie will wear the no.8 jersey when the Free Jacks run out against the black and gold of the SaberCats. Justin Johnson, a standout in last week’s contest with Los Angeles, moves to flanker, pairing with Joe Johnston to create a dynamic and dominant back row combination.

Harry Barlow earns a role in the starting XV this week at number 11. Scottish international, Dougie Fife, moves to fullback to cover the injured Beaudein Waaka, and Mitch Wilson will complete what will be an exciting back three.

John Poland will again pair with Harrison Boyle to direct the match at half back and first five with respectively. Poland’s red card in last week’s match against Los Angeles was reduced to a yellow card in the post-match appeal process.

Conor Kindregan, who was unavailable week one, returns this week and will earn his first cap of the season from the bench. He is joined by Boston local and sensational stepper Danny Collins as additions to the reserves set to make an impact throughout the match.

Despite the loss in Round 1, the Free Jacks team is looking to build on a solid foundation of positive behaviors and efforts displayed in the opening performance. With an emphasis on the detail of their attack and defense structures, the Free Jacks will look to challenge Houston across the park and showcase some innovative attacking strategies this weekend.