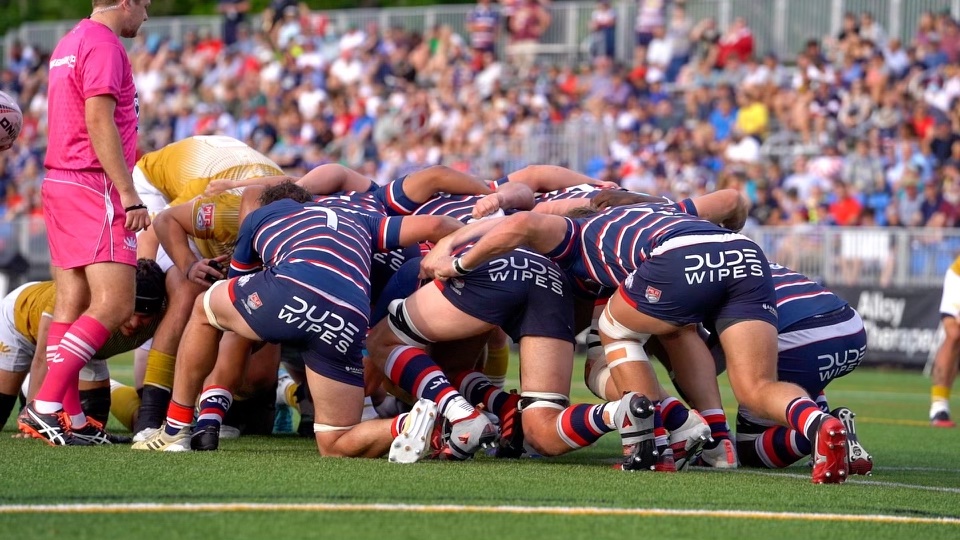 BOSTON – June 30, 2021 –  There is perhaps nothing more perplexing to the American sports than the play of rugby. From the scrum to the ruck to the maul, over the course of a 80-minute match, ruggers are consistently pushing against one another in an effort to gain leverage with their lower half. Clearly, a Major League Rugby player’s butt is one his best assets.

In one of the first of its kind sponsorship deals, the New England Free Jacks today announced DUDE Wipes as an official partner for the remainder of their 2021 season. Headquartered in Chicago, Illinois, DUDE Wipes will be featured on the team’s stadium signage and on the back of their match shorts in the final four rounds of Major League Rugby competition.

“DUDE Wipes is an incredible brand that has grown exponentially over the past two years” said Tim Torigian, Free Jacks Director of Corporate Partnerships. “There’s no better placement in all of sports than to have their logo featured on the back of our shorts. We can’t wait to add the Free Jacks to their roster of teams they support.”

DUDE Wipes got their start when four friends, Sean Riley, Ryan Meegan, Brian Wilkin, and Jeff Klimkowski came up with the idea in their Chicago apartment in 2010. In 2015, they appeared on ABC’s “Shark Tank” and secured a $300,000 investment for a 25% stake in their company from Dallas Mavericks owner and rugby enthusiast, Mark Cuban.

“We are super excited to partner with the New England Free Jacks for the remainder of their 2021 season” commented Ryan Meegan, Co-Founder of Dude Wipes. “In all aspects of our marketing at DUDE, we always strive to make a splash and think outside the box. When the Free Jacks approached us about sponsoring the back panel of their shorts, we jumped at the chance. We’re looking forward to a fun few weeks as they make a playoff push and get DUDE Wipes some notoriety in a brand-new space for us like Rugby.”

The Free Jacks have three games remaining in their 2021 season and are looking forward to taking on conference rival, Rugby United New York on Saturday, July 3rd. The team then travels down to Atlanta to take on the Toronto Arrows on Sunday, July 11th before wrapping things up with their final match of the regular season on Sunday, July 18th against Rugby ATL at their new home at Veterans Memorial Stadium in Quincy, MA. For tickets or more information on the Free Jacks home schedule, click here. Games are aired on NESN or NESN+.

About DUDE Wipes: DUDE is one of the fastest growing men’s hygiene companies in the U.S., started by four lifelong friends out of Chicago in 2012. Their flagship product, DUDE Wipes, the first flushable wipe marketed to men, is in over 12,000 stores nationwide (Walmart, Kroger, Target, Albertsons & Safeway). DUDE has expanded its product line and they also offer DUDE Shower Body Wipes, DUDE Face Wipes and DUDE Body Powder. In 2015 DUDE Products appeared on the ABC show Shark Tank where they received an investment deal from Mark Cuban.

Major League Rugby:  Major League Rugby (MLR) is a professional rugby league, launched in April 2018. It is an initiative of the American rugby community, in partnership with private investors, who believe that American rugby can thrive at the highest levels—as a commercial enterprise; as an influential player on the international scene; and as a participation sport at the youth and senior level. MLR is the pinnacle of American rugby, and provides a rallying point for local communities, a focal point for American rugby fans, and an aspirational destination for young athletes. For more information, please visit https://www.majorleague.rugby/.