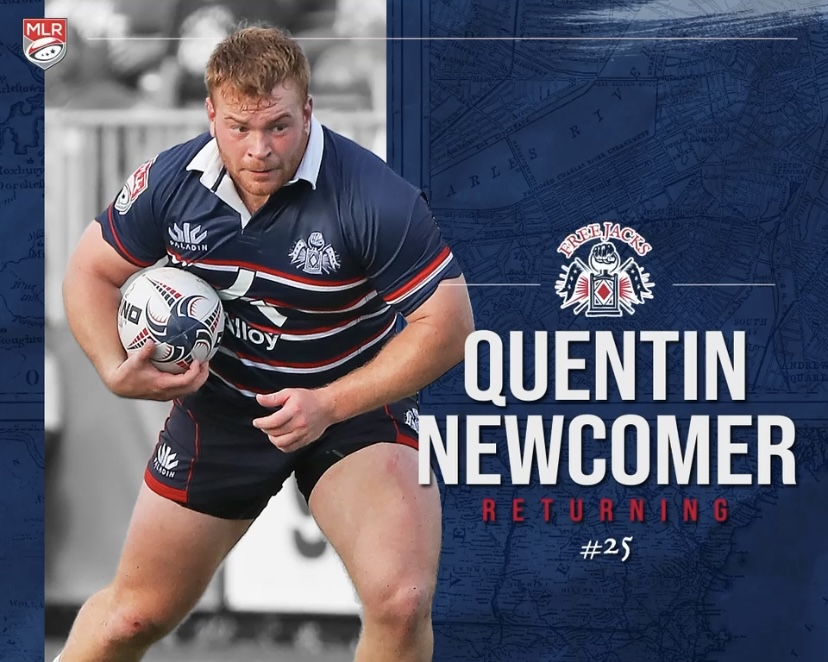 BOSTON – September 22, 2021 – Moving into the 2nd year of his three-year contract extension, Quentin Newcomer looks to build upon the escalating progress he has made since joining the team in 2019. The 25-year old, 6’1, 260lb tighthead prop will continue to be a force in the front row as he forges through opposing scrums in 2022.

On the pitch, Newcomer was a defensive perfectionist. With only 3 tackles missed in 13 games played, ball carriers found little success trying to break through the brick wall that is Quentin Newcomer.

Not only accountable on defense, Newcomer has earned his stripes within the scrum. “A lover of scrum-time, Quentin this year showed he is well on his way to becoming a destructive scrummager as both a loose and tighthead prop through some devastating performances against quality opposition,” according to Free Jacks Performance Manager, Tom Kindley.

“Quentin developed tremendously during the 2021 season, stepping up when the team needed him most in Round 7 against Austin, a game he used to jump-start his season and prove himself as an integral component of the New England front row.”

“He is a good competitive team man, well respected for his desire to improve and excel. We look forward to seeing Quentin continue to earn his stripes during MLR 2022.”

With the amount of efficiency Newcomer puts out onto the field, it’s difficult to recall the fact that he only began playing rugby four years ago. Originally from Fairfax, Virginia, Quentin began his journey with Steamboat Springs rugby club before playing for Sumner Rugby Football Club in New Zealand. With the trend of Newcomer’s rapid progression in his time with New England, it is easy to see the driving impact the Virginian Bull will make in the front row within the next two years.