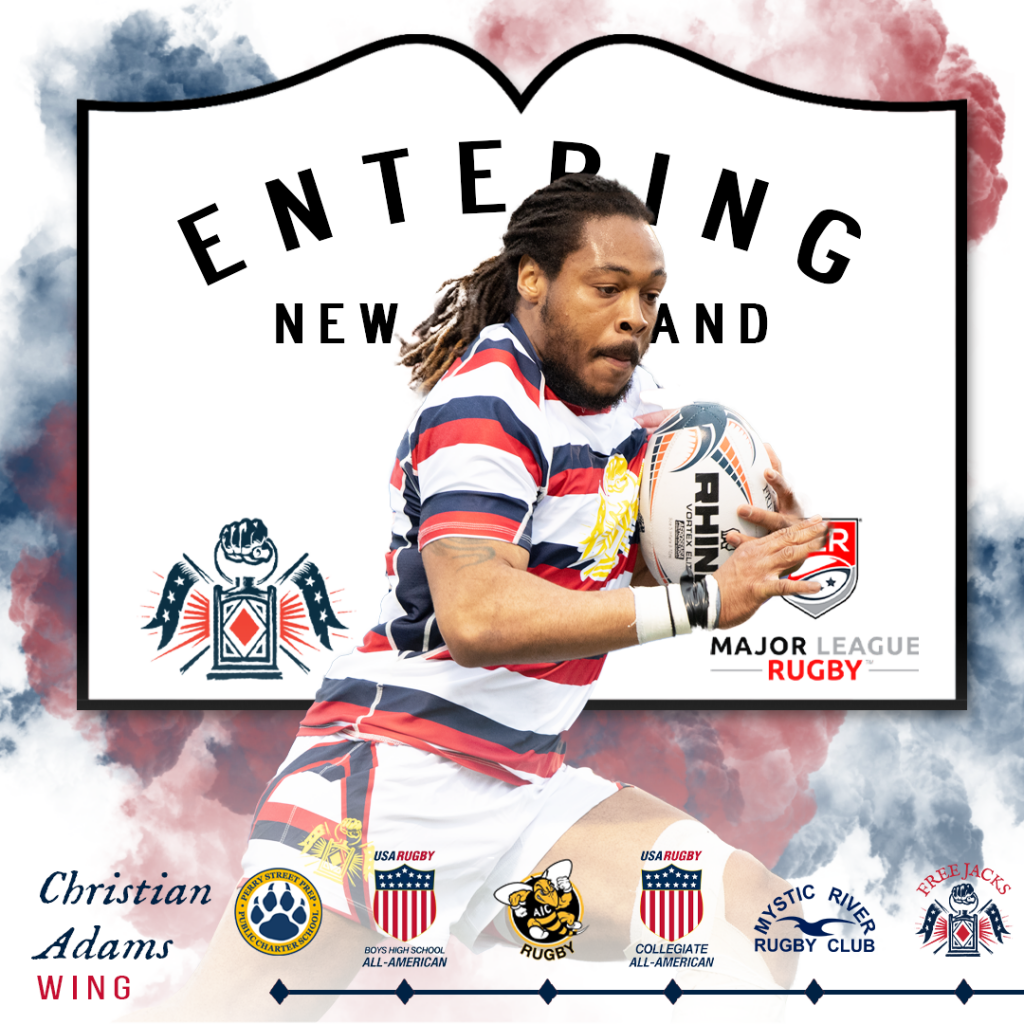 Christian Adams is a dynamic, explosive and dedicated Free Jack who is looking forward to hitting Major League Rugby at pace during New England’s inaugural 2020 season in the professional league.

Christian first picked up rugby at Perry Street Preparatory High School. Growing up, Christian excelled in basketball and football and took to rugby with a high sporting IQ and a level of athleticism that brought him to the top of the High School game in the United States.

His senior year, Christian represented the High School All-Americans in 7s at the Las Vegas International and in 15s on the team’s tour to Argentina. Christian remembers the tour as the “beasty team” having laced up with the likes of Titi Lamositele (Saracens) and now MLR players Benjamin Cima, Scott Dean, Hanco Germishuys, Vili Helu, Siaosi Mahoni, Malcolm May, Michael Reid, and Joeli Tikoisuva all on the 2013 trip to Argentina.

Christian went on to earn three more All-American caps at American International College in Springfield Massachusetts. He represented the AIC Yellow Jackets while pursuing a B.S. in Criminal Justice. He helped lead the team to three consecutive championships during his time at the program and credits his team and coaches at AIC for building his professionalism and teaching him how to prepare as a player both on and off the field.

“Getting the opportunity to play at the professional level in the US and to see how I stack up against other wings in the MLR is a chance not many get,” said Christian. “I’m looking forward to showing what I can do and how far I can go while also appreciating the chance to play on the same field as guys like Nonu, Bastareaud and Rene Ranger – guys I looked up to growing up.”

After graduating in 2017, Christian went on to play for Mystic River in Boston as well as the Northeast Olympic Development Academy. While Christian continues to develop as an international wing & center, he has stayed focused on his core mission of bettering the community through his current job as a Social Worker with the Department of Children and Families.

Christian had a fantastic 2019 fall season with Mystic river building on his aerial contest, counter attack and electric footwork in the ARP.

To catch Christian in action next year with the rest of the Free Jacks be sure to select your seats for the 2020 season in Major League Rugby while seats are still available!  Head to thefreejacks.showare.com or click the tickets link above to get your seats today.