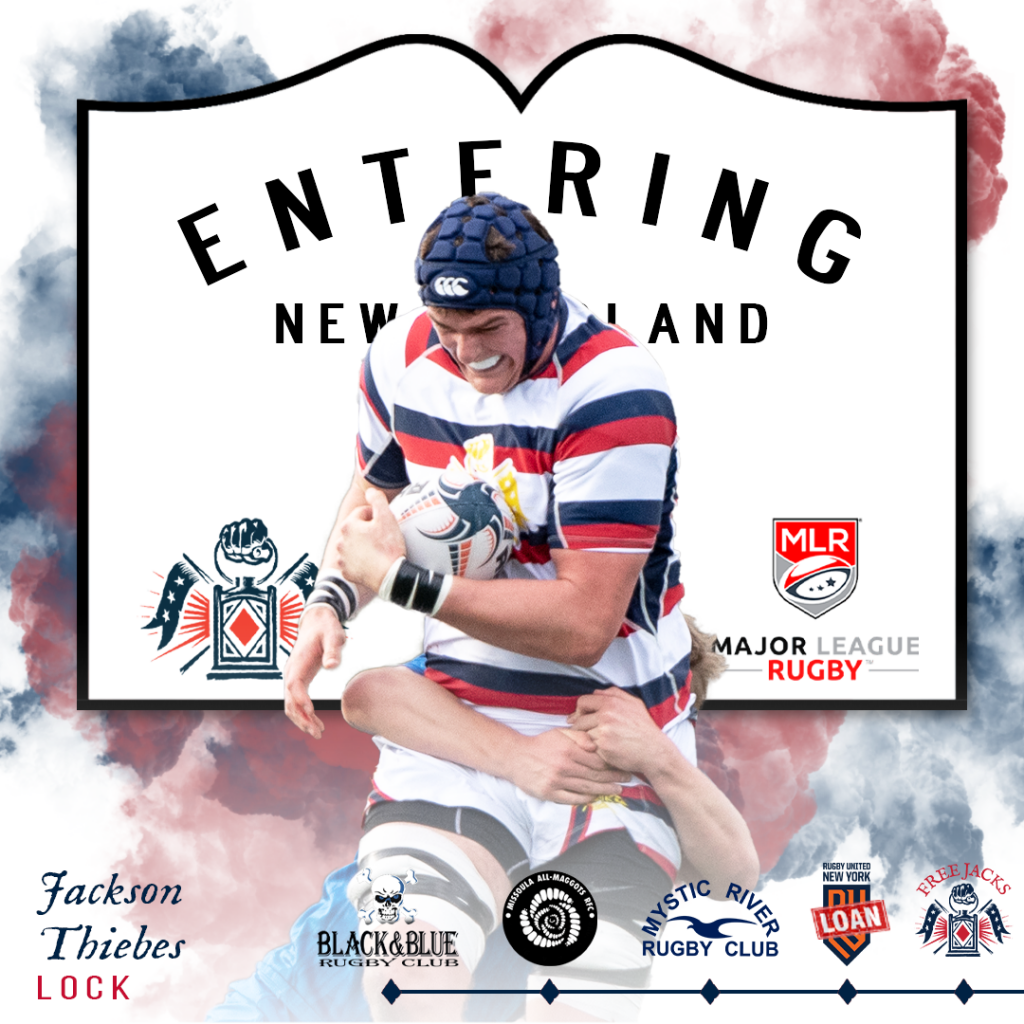 Jackson Thiebes is a workhorse of a lock who knows how to put in a shift to improve himself and others on the field. Jackson was influential as a 2nd rower in the Free Jacks exhibition season against the Irish provinces, and already made his mark on the MLR during a spring loan to Rugby United New York.

Jackson was born in Portalnd, OR, and raised Kalispell, MT. He spent his high school days playing rugby and football. “The two sports complement each other,” commented Jackson. “The decision making, leadership and tackling from rugby carried into my football game where I was able to pick up the athletic and explosiveness of the sport.”

That athleticism, combined with Jacksons frame of 6’5” 255lb, made him a top competitor no matter what field or game he was playing on. After graduating high school, Jackson went on to play football at University of Montana where he became a third-team all-conference offensive tackle and tipped the scales at over 300lbs!

Jackson graduated with a BA Psychology and recently earned an MBA-Marketing degree from Endicott College in Beverly, Mass. Jackson found his way to Mystic River in Boston where he had a breakout season in the 2018 ARP cup series.

Since then, he has proven his work rate is unquestionable and as the game becomes more natural to him will be sure to shine on the highest level.

Jackson is looking forward to what’s to come with the Free Jacks, stating, “I’ve seen first-hand the level of intensity and accountability that players have for each other and the themselves when they show up at practice or the weight room and I’m looking forward to building that environment here in New England with the guys this year.”

“I’m also looking forward to being on the road with this group who have each other’s backs on and off the field. It was the same when I played football at UM and is one of those things that I love about team sports.”

When asked about his passion outside of rugby Jackson replied that right now he hopes to be the best brother, son and boyfriend he can be and make the most of the opportunities earned. No surprise his altruistic nature shines through in everything he does, having been involved with the Big Brother and Sisters of America program, Habitat of Humanity, special Olympics, and various other volunteer and mentorship organizations.

The Free Jacks are excited to introduce Jackson to New England and the MLR and we can not wait to see what he can do when the team gets together in a few weeks.

To catch Jackson in action next year with the rest of the Free Jacks be sure to select your seats for the 2020 season in Major League Rugby while seats are still available!  Head to foundingmember.freejacks.com or click the tickets link above to get your seats today.