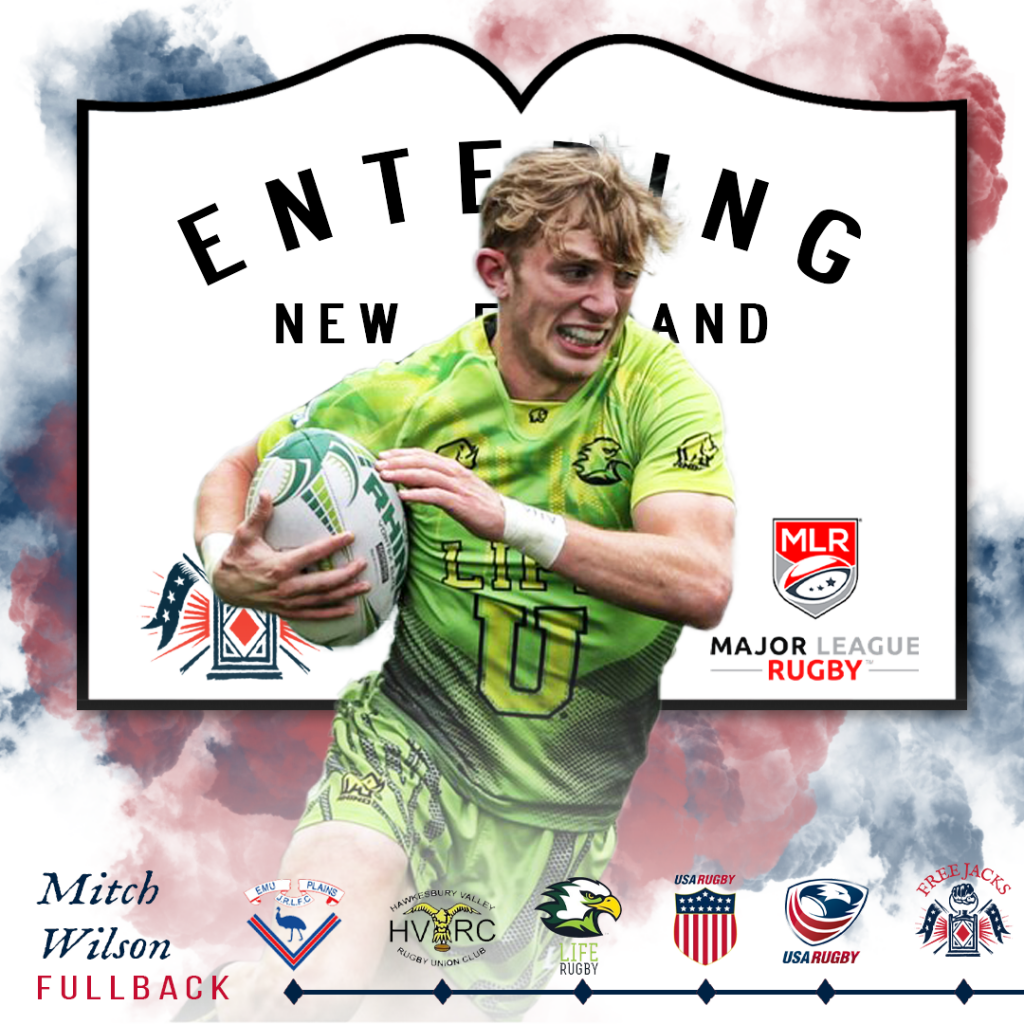 The Free Jacks are excited to welcome Mitch Wilson, 24, to New England for the Inaugural Season in Major League Rugby. Mitch, primarily a fullback, can slot into the backline at any position and is sure to use fancy footwork, aggressive line-speed, and abundant positivity to raise the level of play on and off the field this coming year.

A native of Sydney, Australia, Mitch grew up playing rugby league for Emu Plain Rugby League Club. Starting at the Under 6 level, Mitch built a foundation of rugby skills at the Western Sydney based league club until he was 14. At that point, Mitch made the code switch and his rugby union debut with Hawkesbury Valley Rugby Club.

A year later, Mitch and his family moved to the United States, where he began High School in Oviedo, Florida. In the two seasons Mitch played in Florida, he garnered recognition as a standout player in age-grade leagues while representing Orlando Youth Rugby Club and earned his first All-American recognition in 2014.

“They hold you to a professional standard,” Remembers Mitch. “Both as a player and as a student. It’s one of the reasons they’re constantly putting out a great product on the field.”

Life won 3 consecutive D1A National Championships while Mitch was with the program. During the time, Mitch served as captain for his last 3 years and earned another 4 All-American nods, representing the collegiate team in 2016, 2017, 2018, and 2019.

Along with the championships he has earned, Mitch considers his experiences with the All-American program some of highlights of his time on the rugby field.

“Coming together to play with friends on other teams, work with the guys you’ve spent the season playing against and test yourself in a new environment makes for memorable experiences,” commented Mitch. “The All-Americans have given me a chance to push myself and learn from a new field of players and coaches and I’m a better rugby player because of it”

His performances at the select level, including the 2018 All-American game vs a professional Colorado Raptors team, raised the profile of his rugby ability, and ultimately led to his selection as part of  2018 USA Select team for the America’s Pacific Challenge. On tour to Uruguay he competed against National teams as Tonga, Uruguay, and Argentina. Despite not coming away with the Championship, Mitch was able to gain valuable experience in his first senior international competition.

While many in the rugby community will recognize him for his on-field play, Mitch himself has already begun making contributions to the next generation of players, having acted as an Assistant Coach for Atlanta Youth Rugby. Most recently, Mitch spent the Fall of 2019 as the Assistant Coach at Dartmouth College, working alongside All-American coach, James Willocks.

“Coaching can make you a better player, and I’m grateful for the opportunity work at those skills with a coach like James to learn from.” He commented. “I’m passionate about rugby, and coaching allows me to share what I’m passionate about with people who are excited to learn.”

Now, as member of the Free Jacks back line , Mitch will look to put on display all the talent and explosive ability that has made him one of the exciting names in USA Rugby. We are excited to see what Mitch can do on the field in 2020.

To catch Mitch in action next year with the rest of the Free Jacks be sure to select your seats for the 2020 season in Major League Rugby while they are still available! Head to foundingmember.freejacks.com or click the tickets link above to get your seats today.