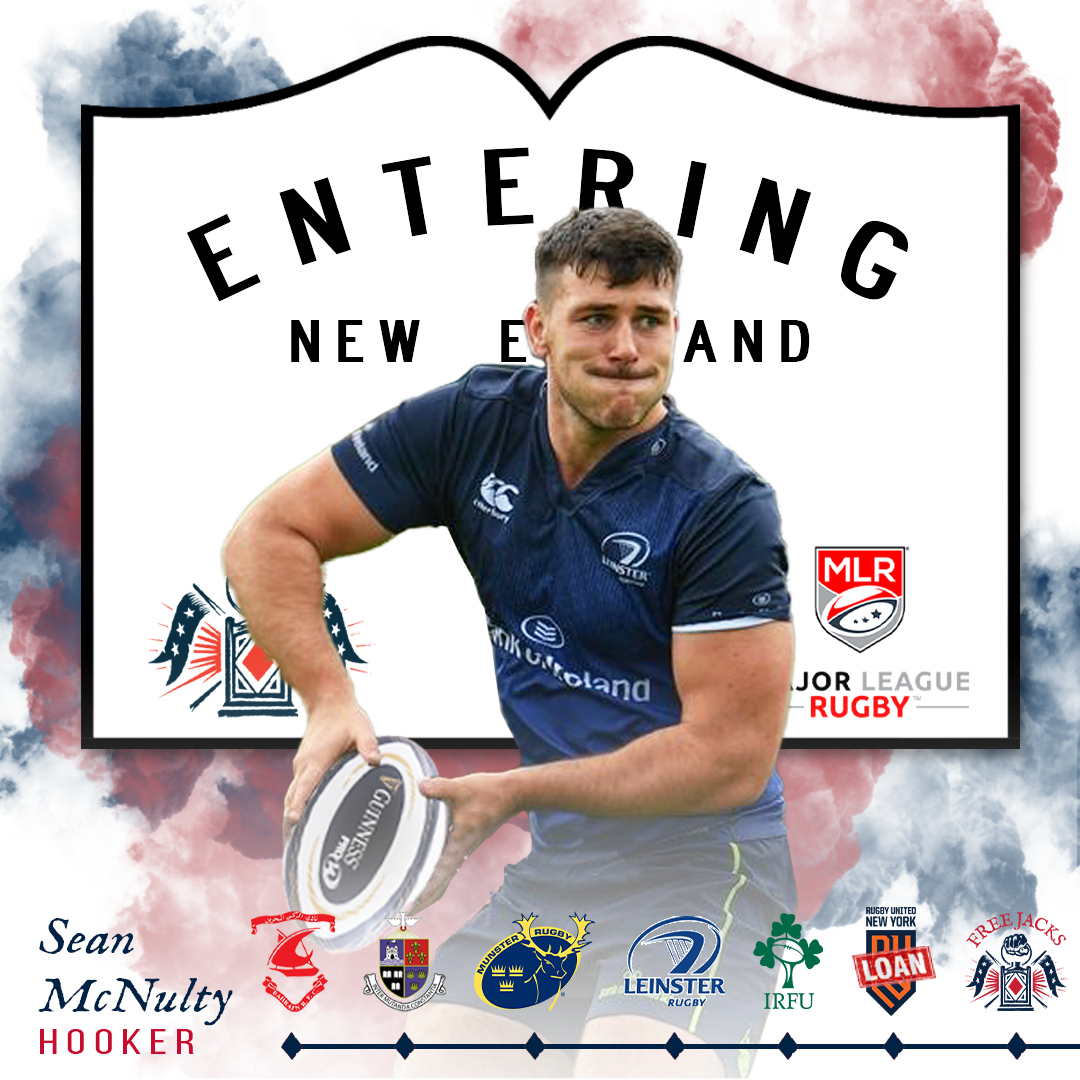 Meet Sean McNulty, 24, who returns to New England and the Free Jacks as a skilled and versatile hooker. Sean sports an impressive rugby resume at his young age, having made appearances with clubs on three different continents, while earning a Bachelor’s Degree in Business and Sports Management from the University of Dublin.

Born in London, Sean moved to Rye, New York at the age of 1, where he and his family lived for nine years. He moved to Bahrain when he was 10, where he picked up and played age-grade rugby with Bahrain RFC. A year later Sean returned to Ireland where he attended Rockwell College boarding school, and helped lead the team to the Munster Schools Senior Cup as a three-year starter. It was during his time at Rockwell that he first appeared on the Irish Rugby Football Union’s radar, and in 2013 he earned his first appearance with Ireland’s U19 side. Between 2013 and 2015 Sean went on to represent Ireland U19 and U20  teams in both 15s and 7s.

Sean went on to study at the University College of Dublin where he represented the College team in the All Ireland League. At his time on the team Sean earned 3 Colours in the annual match against Trinity. The annual fixture between the University of Dublin, Trinity College, and University College Dublin are some of Sean’s most memorable times on the rugby field and he is proud to have played for UCD for 6 of the last 7 years.

Concurrently, after coming through the Munster Rugby academy system at U18, U19 and U20 levels, Sean joined the Leinster Rugby Academy in 2015. From 2015 – 2018 Sean trained with the Leinster senior side and represented Leinster ‘A’ in the British & Irish Cup.  Over three seasons, Sean made several pre-season appearances with the senior squad where he tuned his skills and grew into the physical and experienced player.

“Playing for a club like Leinster is demanding. At every level the players, coaches and staff are pushing you to improve yourself and others and it becomes an environment designed to help players learn, grow, and compete.” Sean commented on his time at Leinster. “Leinster prepared me for the professional environment and hopefully we can build on the systems picked up from the Irish teams and create a winning culture here in New England.”

Sean joined the Free Jacks at the start of the 2019 exhibition season for the Cara Cup between New England and four Irish Provinces. During a brief loan, he played in multiple matches for MLR friends and rivals, RUNY, last spring and made an impact on the field. In four games he accounted for 26 tackles and averaged four meters per ball carry. Now, as a member of the Free Jacks, Sean will look to use the skills impressed upon him by his coaches both here and abroad, to become a leader and impact player in the 2020 season.

“I think we have something special this year.” Sean said. “We got some great guys with a range of international experience who are ready to work hard. I’m looking forward to starting up with the boys in a few weeks and launching into the 2020 season.”

Sean currently qualifies for the USA Eagles having lived in the US for more than 10 years. His folks are based in Hingham, Massachusetts and he is looking forward to making New England his home and a rugby base in the coming years.

To catch Sean in action next year with the rest of the Free Jacks be sure to select your seats for the 2020 season in Major League Rugby while they are still available! Head to foundingmember.freejacks.com or click the tickets link above to get your seats today.