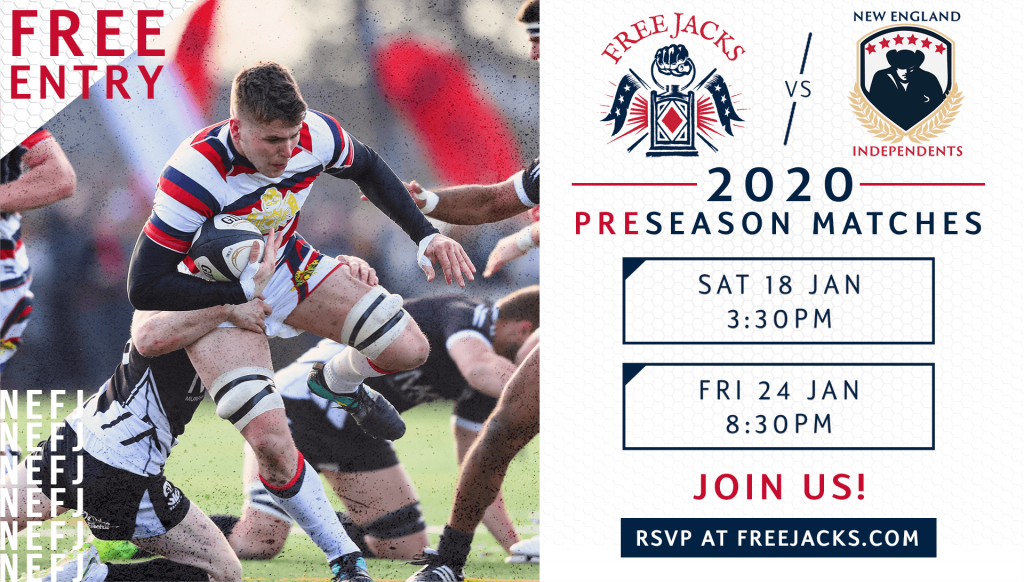 BOSTON—January 8, 2020—To kick off their Inaugural Season the New England Free Jacks, greater Boston’s first professional rugby team, will host the New England Independents in two pre-season fixtures, January 18 and 24.  Both matches are FREE to the public and viewers will have the chance to meet the players of New England’s newest professional team entering Major League Rugby this season. The matches will offer fans a up-close look at the first intimate game experience with the players, coaches and staff of the Free Jacks as the team prepares for their season ahead.

The Independents team features a select squad of local All-Star talent representing players from eight clubs around the New England area.  Players have come together for three weeks of preparation under head coach Adam Zilcoski of the Boston Irish Wolf Hounds. The preseason fixture is an opportunity for local players to showcase their abilities and Free Jacks coaches to identify future athletes. The reassembling of the Independents team connects the local New England clubs that historically came together to compete against touring international sides and embodies the values of the local rugby community.

The first fixture is set for Saturday January 18 kicking off at 3:30pm. The following Friday January 24 at 8:30 the teams will reassemble for the second match of the series. The matches will be held at the Union Point Sports Complex in Weymouth, MA.

The matches are open to the public and you can RSVP now below.

About New England Free Jacks:  The New England Free Jacks are greater Boston’s 1st Professional Rugby team representing all the greatness of the six New England states on and off the field. The Free Jacks were named the 9th member of Major League Rugby on September 20th and will compete in the 2020 MLR regular season. For more information please visit www.freejacks.com