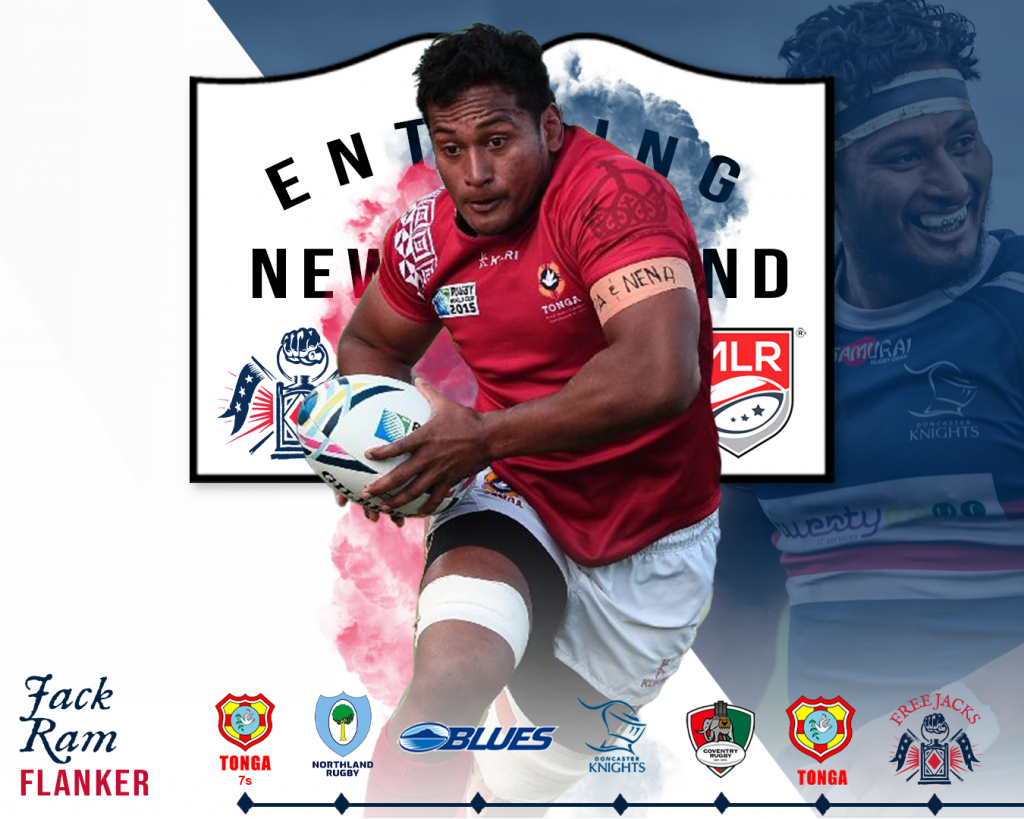 BOSTON — August 18 2020 — Tongan international loose forward Jack Ram to join the Free Jacks playing roster for the 2021 Major League Rugby season. Ram enters New England steeped in International experience and proven in both hemispheres, having represented his home nation of Tonga in both rugby codes of 15s and 7s, appearing for Super Rugby’s the Blues, stamping his mark on the Mitre 10 Cup with 38 appearances and seven tries for the Northland Taniwha, and scoring six tries in 44 appearances for English Championship teams Doncaster Knights and Coventry RFC.

“First and foremost I thank God for this blessing,” commented Ram. “It’s a great opportunity to become part of the Free Jacks family and experience the exciting footy that is MLR. I’m looking forward to sharing my experiences on and off the field and contributing to the development of what is a fantastic organization.”

Ram made his international 15s debut for Tonga during the 2015 Pacific Nations Cup against the United States. The 6ft, 230 lb back rower has since earned 13 international caps for Tonga to date and in 2015 was selected for the Pacific Island nation’s Rugby World Cup campaign. His tournament included a man-of-the-match performance in Tonga’s win over Namibia in which Ram dotted down on two occasions.

Ram has also amassed 39 caps for the Tonga Sevens side, scoring eight tries. In 2012 Ram led the side to one of the team’s most famed victories when he scored a try to help Tonga 7s defeat Fiji for the first time in history at the Wellington Sevens. Most recently, Ram was again selected to the Tongan 7s team that competed at the 2018 Sevens Rugby World Cup in San Francisco.

“Jack ‘The Battering’ Ram is a super explosive player on both sides of the ball,” commented Head Coach, Ryan Martin. “Jack brings a wealth of knowledge as a professional at the top echelon of the game for over eight years and will be a great resource for our younger players. Jack is a multi-positional forward who will terrify opposition defenses with the ball in hand.”

In 2015 after three strong seasons in the Mitre 10 Cup with the Taniwha, and two seasons in the wider training squad for Super Rugby’s the Blues, Ram made his first appearance for the Auckland-based team in their 2015 Super Rugby final pool match against the Highlanders.

Following the 2016 season with Northland, Ram moved to Doncaster Knights in the English Rugby Championship. The subsequent spring, he signed with Doncaster’s rival, Coventry, where he would eventually be voted Players’ Player of the Season at Castle Park and also named in the Championship Dream Team—a selection made by the coaches of the 12 Championship clubs.

Join Jack and the Free Jacks for a virtual meet and greet, “News and Brews,” on Thursday, September 10th. Grab a Free Jacks IPA by Baxter and join the virtual gathering and get to know the newest Free Jacks and the returning players. RSVP using the link here: https://freejacks.com/news-and-brews/.